Emerald Lavere's "Top Ten"...Hotties!
Since My first two books are about women who enjoy a lot of husbands, I thought my Top Ten list should include some of the beautiful men that inspire my writing. Starting with eye candy who grabbed my attention more recently, and working down to my long term crushes:
10. Jared Haibon. This cutie pie from the last season of The Bachelorette is my most recent crush, sure to inspire a future character. Most likely a boy toy for an older woman. (sigh)
9.Jonathan Rhys Meyers. A huge part of the reason I am currently binge-watching The Tudors on Netflix. Could inspire a character with women lining up to his love slave.
8. Boris Kodjoe. If you haven't seen this flawless specimen of a male on The Last Man on Earth, you are missing out. I'm keeping this beauty in mind for future inspiration. Although, his sexy, deep voice is what I hear for my character Eltrion in A Wife for the Future.
7. Loki-Tom Hiddleson style. I know I'm really naming the character rather than the person, but Loki is that sexy bad man you know could turn it all around if he just met the right woman. When I picture the character's romance, someone is definitely getting tied up--in a good way.
6. Jensen Ackles. Dude is just super cute and irresistible. That boy next door that turns your life upside down. 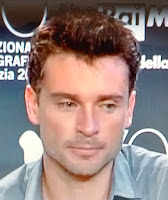 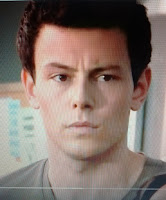 3. Cory Monteith. This is a sad one, and I didn't exactly have the hots for him because on Glee he seemed so much younger than his actual years. However, I wanted to include him on my list because I imagined him in my dream cast for The Wikomsette, for the role of Viktor. A MUCH different character than Finn on Glee, but he was the right physical type, and somehow I feel he could have done the part justice. 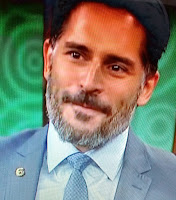 2. Joe Manganiello. While most may know him from True Blood, I first noticed him in Magic Mike. No, it wasn't the "Big D--- Richie"
dances, it was him with glasses at the sewing machine that got me worked up. What can I say? Glasses just do it for me.
I was halfway through writing The Wikomsette when I first saw "Joe Man" but after that, I couldn't NOT picture him as my character, Ax.
1. Tom Welling. Smallville's Clark Kent has long been a featured subject in my fantasy life. He inspired the lead in the first novel I ever wrote (still tucked away for future revamping) and was the inspiration for Niku in The Wikomsette. 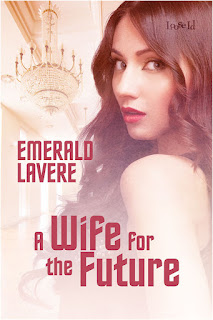 A Wife for the Future (erotic sci-fi) (New release, 1/19/16)
Book 2 of The Wikomsette series
Published by Loose Id
A Wife for the Future (Blurb):
Ashling's never understood some of the oddities of her upbringing. But it all becomes clear when a family secret is revealed to her: her father is from the distant future. More than that, it's been predetermined that he will return to his native time on Ashling's twentieth birthday and she must go with him. Future society has a critical shortage of women and humanity is threatened with extinction.Given time to recover from the shock and to prepare for a vastly different civilization, Ashling accepts her fate. A fate that requires that she take several husbands--and produce offspring to help prevent the human race from dying out. After her sheltered childhood with limited social interaction, Ashling finds herself aroused by the idea of having romantic partners for the first time in her life.As soon as she's introduced to her prospective mates, feelings of being overwhelmed are quickly replaced by desire for the men who wish to court her. Ashling takes three husbands, reveling in the passion she shares with each of them. Life becomes one delicious encounter after another.And then her father is accused of a crime, and the only man willing to help free him is the man Ashling wants most, and the one she may never have.
Excerpt:
Now I’m exhausted, and holding out to get through to the end, when at last the music changes for the final song. Number one hundred and fifty retreats, and I look with relief for the very last man of the day.
“Ahem, may I have the pleasure, Lady Ashling?”
I turn around and see Jules with a card in hand, waiting with that ever-present smile on his face, though now it seems more tentative than his usual grin, like he’s gauging my reaction. I’m not sure what to think. In the couple of days I’ve been here, he’s been a near-constant attendant, and I’ve come to think of him as friendly and likable. I hadn’t really thought of him romantically, but then again, I never saw him dressed to kill like he is tonight. He does look exceptionally handsome.
“Of course.” I step forward and reach up to place my hand on his shoulder. We’ve never been this close to each other, and I notice his scent for the first time. It’s warm with just a hint of spice. His hand slides gently across my back, and I feel a tingle in my spine. It’s different being this close to someone I’ve already gotten used to having around.
“How are you doing with all of this?” he asks.
I can’t suppress a smile. “Between you and me, I’m dead on my feet. So, if you can just kind of hold me up, that would be greatly appreciated.”
He laughs. “Of course, my lady.” He grips me a little tighter, and the tingle from my back makes its way lower. His other hand clasps mine.
I feel giddy. Maybe it’s because I’m deliriously tired, but also Jules is swinging me effortlessly across the dance floor and it feels a bit like flying.
“I didn’t know you would be one of the suitors tonight,” I say, just before his gaze flashes to something over my shoulder.
“Ahem, well, strictly speaking, I wasn’t on the scheduled guest list.”
“Oh?”
“And to that point, I’d best take my leave.” He steps back and takes my right hand in his. He bows and kisses the back of my hand with those sculpted and soft lips. Then he walks hastily away. I look over my shoulder and see two burly men coming toward me, working their way through the crowd.
Buy links: A Wife for the Future:
http://www.loose-id.com/the-wikomsette-2-a-wife-for-the-future.html
http://www.amazon.com/Wife-Future-Wikomsette-Book-ebook/dp/B01ATTPC72/ref=sr_1_5?ie=UTF8&qid=1453396452&sr=8-5&keywords=A+Wife+for+the+future