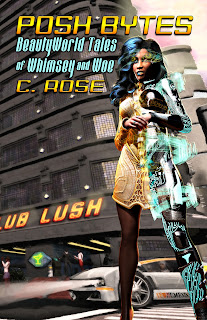 
Thanks for stopping by to talk a little about your writing! Let's jump right in. When did you begin writing and why?

Thanks for hosting me! I've written on-and-off for the past twenty years, but I seriously began writing in a concentrated way about 4 years ago. I'm not sure why I write. I think it's because I'm a bit of an introvert.

Do you have a favorite genre? Is it the same genre you prefer to write?

My favorite genre to read is science fiction. I particularly enjoy focusing on women science fiction authors. I think they should be supported in such a male-dominated genre. I also quite enjoy paranormal fiction. Really, I enjoy reading…and writing…anything that stretches the imagination. My book Posh Bytes is science fiction, so there you go.

Do certain themes and ideas tend to capture your writer’s imagination and fascinate you?

Yes. First and foremost, i'm interested in the human story irrespective of genre. I like characters that are as complex as real people, so regardless of the backdrop, I like to explore what drives the characters along. In Posh Bytes, I was interested in exploring what life would be like in a society where physical beauty is easily attainable. If everyone can be beautiful, then what's left? How would that affect the fashion industry? How would models be chosen? How would business that trade on looks be affected? How would the average person on the street be affected? What sets a person apart, if not their looks? Humans are such visual animals. We allow our sense of sight to make decisions for us on a daily basis, to our own detriment, I think. Life is deeper than that. This is what fascinates me in a constructed universe where everyone is "perfect."

Do you have a favorite author who introduced you to the genre?

My favorite author, hands down, Is Lois McMaster Bujold. You just don't get any better than her. For me, she's the gold standard. She incorporates the more technical aspects of science fiction with real character development. She's interested in the protagonist's journey. She gets inside a character's thoughts and feelings better than any other contemporary author. Period.

What advantages or challenges does a writer in your genre face in today’s fiction market?

I hate to say it, but I do think it's harder for female authors to break into the science fiction market. I think that's changing, but there is still truth to it. Women have a voice and viewpoint on life - for better or worse - different than male authors. Science fiction doesn't have to be sterile and hard. It can have a soft, human side, too. That said, I think there is a real opportunity for female science fiction authors to stand out and make a name for themselves - if anyone will give them an initial listen. It's a market that could really open up. I think the readers are ready. I'm not sure the industry quite gets it yet.

Tell me a little about the characters in Posh Bytes.

Posh Bytes is a collection of short stories set in a constructed, futuristic world, much like our own. Each story contains a main character that has to overcome some problem related, either directly or not, with their neural implants that affect how others visually see them, and how they, in turn, see the world around them. The stories run the gamut from funny and quirky to sad and tragic. For example, one of my stories is about an astronaut who suffers a head injury; his brain no longer supports a neural implant. What does that mean for him? He loses his job, and is no longer "connected" to his wife. What happens to him? How does he overcome this challenge?

One of my other stories, by contrast, is a classic "heist" story involving a thief who steals celebrity sex pheromones for black market trade. His story begins at the point where he's given a contract he can't quite deliver on. What's that all about?

I have another story that is a sweet, young-love story about letting go of the past, and opening oneself up to an unexpected love that presents itself.

There are other stories about the fashion and modeling industry - about how neural implants and beauty programs would affect all of that. You don't buy actual clothes or makeup any longer. You buy programs that allow you to wear and apply certain looks. What's that all about? And does it make a difference - in the dark - with your clothes off?

I do have one character that pops up in a majority of the seven short stories. Her name is Valerian. She's basically a "good girl" but with a hard, naughty exterior. Hers is an interesting story. So far she's only been a supporting character. I have plans, though, to write a novel featuring her. She's kind-of the anti-me. I'm good on the outside, but some of my thoughts aren't always so nice… It'll be interesting to see what happens with her. I always allow the characters to write themselves, so I'll see what she has to say when I begin writing her story.

Where’s the story set? How much influence did the setting have on the atmosphere/characters/development of the story?

All the stories are set in a constructed universe known as BeautyWorld. The scenes all take place in a city that is a direct cross between Los Angeles and New York. Los Angeles is the center of the world - for now, at least - of the film industry. New York is the center of power and money and, some would argue, fashion. You have a powerful one-two punch of beauty, influence, money, and power. This is BeautyWorld.

If you had to write your memoir in five words, what would you write?

I've worked hard for everything.

How often does your muse distract you from day to day minutiae?

I'm a daydreamer by nature. It's just what I do. As a kid, I'd sit and just daydream for hours on end. These days, I'm sure I'd be slapped with some silly label and put on drugs, but i have to say, it hasn't harmed me one little bit. It's what you do with your dreams that counts.

Well, as previously mentioned, I am going to write a sequel to Posh Bytes. It'll be a novel featuring Valerian, but also bringing into the story many of the characters readers already know from the collection of short stories. But - before any of that…I plan on publishing a novel later this year. It's a paranormal romance of a good girl who falls in love with a nice guy, but is physically attracted to a not-so-nice guy who turns out to be a were-wolf. Does all of this sound horribly trite? It is, and isn't. My monster story will feature no actual monsters, per se. The monsters are the kind that live within the human soul. Of course, what better place to set a monster story than Washington, D.C.? I think we all know our Capitol is crawling with them :) 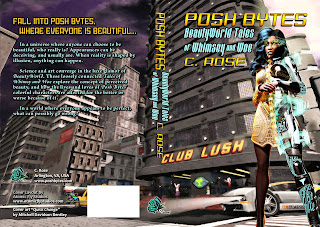 FALL INTO POSH BYTES, WHERE EVERYONE IS BEAUTIFUL...In a universe where anyone can choose to be beautiful, who really is? Appearances can be deceiving, and usually are. When reality is shaped by illusion, anything can happen.Eye of the Beholder - Lavender is a woman who hasn't been able to get over the death of her spouse until the day she meets an unusual man who captures her heart. Will the secrets the two keep from one another jeopardize their budding relationship?The Hawk - Sparrow is an astronaut whose world is turned upside down after an accident that claims his neural implant and almost costs him his life. Surprisingly, his limitations provide him with a unique opportunity beyond his wildest imaginings.Supernova - Mink is a rising, young supermodel who craves perfection and immortality, and will go to any lengths to achieve her goals.Shark Bait - Shark is a professional thief, unable to complete a heist to steal celebrity sex pheromones for the black market. Is he being set up for failure?The Death Mask - Beetle is an elderly mortician who crosses paths with a young woman unable to deal with the death of her mother.Clover Fields Forever - Clover is a beauty and fashion program junkie who can't stop spending money, despite the consequences.Moth to Flame - Moth is an unassuming fashion programmer who gets drawn into the dark world of corporate espionage and human slavery.These Posh Bytes: Tales of Whimsey and Woe explore the human element in the BeautyWorld Universe, where nothing is quite as it seems.

C. Rose works by day as an archivist an records manager. Alternately, she enjoys daydreaming and scribbling by night. She lives with her loving husband and a very demanding cat named Danny. He runs the real show. No, really, he does. And don't you forget it...Check out www.poshbytes.com for upcoming news from the author.

Thanks so much for hosting this today!