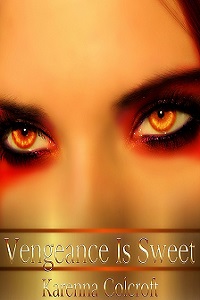 Omara is a demon of vengeance, created to destroy humans who have harmed the innocent and bring their souls to Hell. Known for bending the rules to the breaking point, Omara is placed on probation after one too many infractions. Confined to her apartment, visited only by her friend Ghast, Omara chafes under the punishment.

A battle between two factions of beings and entities, one wanting to kill millions of humans and the other wanting to protect humanity, decimates the vengeance department, and Omara is called back to work. Her first assignment: “venge” Alejandro Ruiz, accused by the soul of his late ex-wife of abusing her and their six-year-old daughter Keeley.

Something about the case strikes Omara wrong, and she chooses to try to prove Alex’s innocence. As she becomes part of Alex and Keeley’s lives, Omara also becomes more and more human. Then she learns that the accusations against Alex are part of a plot to destroy Keeley, who is far more than she seems. To protect the humans she has come to love, Omara will do anything–including sacrificing her own existence.

NOTE: This is a revised and re-edited version of my novel originally published in 2012 under the pen name Jo Ramsey.

“We haven’t much choice this time,” he replied. “It’s either that or encounter a mob even angrier than the last one. And this time, if you opened your mouth, I might not be able to save you.” He raised an eyebrow. “Unless you think you can remain absolutely silent no matter what is said.”
I knew myself a little too well. There wasn’t a chance of absolute silence, especially if someone questioned me or insulted me the way they’d done the night before. “Let’s try the teleportation, then, as long as it doesn’t cost me my job.” Or my existence, since breaking yet another rule wouldn’t look good on my record.
“It won’t,” he assured me. “You’re with me.”
He gripped my hand more tightly, and before I had a chance to react, we stood in my kitchen. Even here, the noise of the crowd filtered through the windows. Apparently the demonstration had expanded to even the bad neighborhoods.
“Are they going to be at it all night?” I needed my beauty sleep, after all.
“It’s likely,” Ghast replied. “Tomorrow, you’ll be given an assignment at work.”
It took me a second to follow the change of subject. “Yeah, the supervisor told me.” I wondered briefly how Ghast knew about it, and decided I’d be better off not asking.
“Take it,” he said urgently. “Regardless of what it entails, regardless of where in the Midworld it lands you, take it. Nothing is as it seems, and the assignment will be your safe passage out of here until the situation is contained.”
“Um, Ghast?” I propped my elbows on the counter and rested my chin on my hands, blinking at him. “You’re obviously not familiar with how the whole vengeance thing works. Most assignments only take a short time. Not even a day. I’d have my ass, I mean butt, kicked halfway across Hell and back if the one I’m given tomorrow takes more than a few minutes.”
“Nothing is as it seems,” he repeated. “Your supervisor believes he is giving you the lowest assignment, the easiest one, available. He is wrong.”
“Um, okay.” I’d never seen such intensity in Ghast, and it worried me. To break the moment, I straightened up and went to the fridge to see what kinds of beverages I had. “You want anything?”
He didn’t answer. When I turned, he’d vanished. It was just like Ghast to disappear after giving me such a ridiculously cryptic bit of information.
I spent the rest of the night trying to figure it out, and had no more clues when I went to bed than when he’d said it.

Author bio and links
Karenna Colcroft is the alter ego of a shy, sedate wife and mother. A trauma survivor, Karenna believes that everyone is capable of finding love and being loved. Her books depict those who, for whatever reason, are afraid to open their hearts—until they find someone who truly wants to get in. Karenna lives in the northeastern with her husband, two offspring, and three cats.
Website: http://www.karennacolcroft.com
Facebook: https://www.facebook.com/karennacolcroftauthor/
Twitter: https://twitter.com/KarennaColcroft
Tumblr: http://karennacolcroft.tumblr.com/