Discover the Curse of Salar and win an e-book!

Discover Alexis Duran's Curse of Salar and enter the giveaway to have a chance to win e-copies of the first two books in the series. The contest ends on January 19th. The tour is sponsored by Pride Promotions. 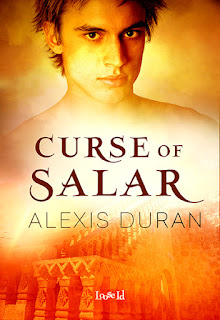 In the kingdom of Jahar, the rule of mages has been overthrown.  Prince Dezra Luzan is held prisoners in the ancestral palace. In order to stay alive, he pretends to be a drug-addicted wastrel, trusting no one, not even his lovers.

Into his lonely existence comes a man who should be his sworn enemy; Captain Rayn Nevar.  Dezra is irresistibly drawn to the rough soldier and his longing for a simple sexual encounter quickly builds into a dangerous obsession.

Captain Rayn Nevar knows he should stay away from Prince Dezra, but his desire for the beautiful young man overrides all common sense. Rayn soon finds himself protecting the prince from a plot to destroy the last of the mages.

When treachery leads to Dezra's escape, he is at last free to unlock his long repressed powers.  Only the arrival of a mysterious monk with powers greater than Dezra's stops the prince from using sorcery to destroy all who stand in his way, including Rayn.

As Jahar edges toward another war between masters and mages, Rayn must question his devotion to his increasingly deadly lover while Dezra must decide if ultimate power is worth the ultimate sacrifice.

Excerpt:
"Kneel."
"What?" Dezra asked, incredulous.
"You heard me."
Nevar stripped off his silk shirt and tossed it aside. The sight of his finely sculpted chest arrested the biting retorts that leaped to Dezra's tongue. The captain's skin was smooth and slicked with sweat. A fine trail of curly black hair began at his sternum and disappeared beneath the line of his belt.
Dezra forced his gaze up to discover to Nevar smirking at him. Before Nevar could summon an insult to put the captain in his place, Nevar sat on the bed.
"Help me with my boots. Or is that beneath you, Prince?"
Nevar leaned back with his arms behind him, weight resting on his palms. He stuck one foot out. The languid expanse of his body beckoned.


a Rafflecopter giveaway
By DawnsReadingNook at January 12, 2016