Please make sure to enter the rafflecopter at the end of the post to be entered to win a $15 Amazon Gift Card to a randomly drawn winner via rafflecopter between this tour and the Review Tour, here.

Hi, Skye Warren here! I’m the New York Times Bestselling author of dark romantic fiction, and I’m also the editor of Take the Heat, an anthology of criminal romance. I’m so excited to share this release with you.

One of the best parts of putting together this anthology was seeing what each author did—and ’s story had a great noir atmosphere and surprise twist. I’m thrilled to have her here today as we get up close and personal, so here we go…
Skye Warren: What did you want to be when you grew up?

Elizabeth Coldwell: My parents say I always wanted to be some kind of writer or reporter, but I also wanted to be an archaeologist, because I was very into dinosaurs. Then I realized it involved digging up dead people, and went off the idea.

Skye Warren: What is your most embarrassing moment?

Elizabeth Coldwell: When I was editor of Forum, I got asked on Sky News in the to talk about the launch of the female condom. Unfortunately, they mistook me for a late-running guest who was actually a child psychologist. I think the news anchor was more embarrassed than me.

Skye Warren: What is your favorite food? Least favorite? Why?

Elizabeth Coldwell: Favorite – cheese. I love it so much, my brother reckons I’m part mouse. Least favorite – celery. It is the devil’s food. Nothing more needs to be said.

Skye Warren: Tell us about a favorite character from a book.

Elizabeth Coldwell: I’m very fond of Jamie Desmond, the hero of my Xcite novella Ridden Hard. He’s an up-and-coming actor who’s confident, unconventionally handsome, sexually submissive and very relaxed about being naked on film. A second book about him, where he gets a part on a big drama, is one of the many things in my to-write pile.

Skye Warren: Say your publisher has offered to fly you anywhere in the world to do research on an upcoming book, where would you most likely want to go?

Elizabeth Coldwell: I quite fancy and the area of , so I could put in some research for that Ridden Hard sequel.

Skye Warren: Do you have a favorite quote or saying?
Elizabeth Coldwell: From Viv Stanshall’s Sir Henry at Rawlinson End: “If I had all the money I’d spent on drink, I’d spend it on drink.’

Skye Warren: What is something you'd like to accomplish in your writing career next year?

Elizabeth Coldwell: One of the publishers I write for has asked me to submit a mainstream, non-erotic contemporary novel, so I’ve just begun work on that. It’s a really long time since I’ve written anything of that length with no sex in it.

Skye Warren: If you were on the staff to have a book adapted to movie, what would you pick?

Elizabeth Coldwell: Donna Tartt’s The Secret Library – I believe it might have been optioned but never filmed, and it’s such a wonderful, Baroque, bizarre story, with the potential for some great scenery-chewing performances.

Skye Warren: Thanks so much, ! And thank you all for coming to check out Take the Heat. If you’re down for a dark ride, I hope you’ll read it! 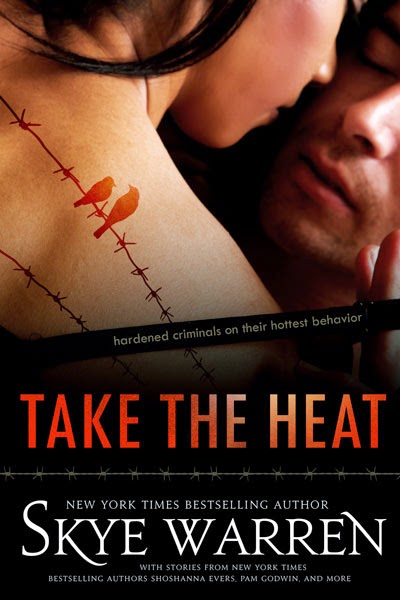 The ultimate bad boys, criminals capture our attention and awaken our darkest desires. Celebrate the illicit in this romantic suspense anthology, where handcuffs are used for more than play. These stories are shocking, sexy, and thought-provoking.

In New York Times Bestselling Author Skye Warren’s Magnolia Hotel, meet the heroine who pays her brother’s debt to a loan shark—who happens to be her childhood crush. Find out if the jury made the right decision in Acquitted by award-winning author Giselle Renarde. Explore a dark and sensual psychology with New York Times Bestselling Author Pam Godwin in Unlawful Seduction.

“You never told me your name.”

I glanced in the rearview mirror to see my prisoner, Jonathan Royal, studying my reflection from behind the metal bars that separated us. Despite the orange jumpsuit, he was a looker. Thick black hair, soulful brown eyes, a full sensual mouth, and a squared jaw. Born and raised in , he had impeccable manners and exuded charm by the bucket load.

Well, as much a killer could.

I focused on the road once more. Truly, a bone-chilling January night and I had to watch for patches of slick black ice on the overpasses. “As far as you’re concerned my name is Deputy Marshall or a ma’am. Take your pick.”

“Just figured we could get more familiar, since we are on a road trip and all, ma’am.”

“We aren’t going on a ski trip, Royal. This is a prison transport.” Prisoners always underestimated me, particularly men. I could see why. At 5’2 with a curvy build, long red hair and wide blue eyes, I looked more like a Sunday school teacher than a threat. But, he should know that appearances could be deceiving. I’d taken guys on nearly twice my size and won.

“All I want to know is your name. That’s all. Two little bitty names. Hardly seems fair, since you know everything about me from my jacket. Why,” he drawled. “I bet you know my height, weight, birthday, and exact location and detailed description of each and every single one of my tattoos.” He whispered that let part, a husky little vocal caress, which felt like it had been purred into my ear.

I shivered and not from the cold seeping in my windowpane either.

Damn it. Why couldn’t he be just some ugly old guy? I shouldn’t even be alone with him. Since the recession, the marshal service had gone through a series of debilitating cutbacks. Normally, two marshals would be transporting someone as dangerous as Royal and he’d be stuffed and cuffed in the back of gas-guzzling van, so I’d only have to see him at the beginning and the end of the trip. Now, only a few thin bars separated us and I didn’t have a partner with me. Someone else I could talk to. So much easier to pretend the prisoner didn’t exist when I could bullshit about weather and bad coffee on the road with a fellow officer.

“If I were you? I would keep my mouth closed and quit while I was ahead. Looks to me like you got a pretty sweet deal, transferring from a maximum security prison to minimum for being such a good boy. Going to be like Club Fed for you. I hear at Elkton, they have a gardening club and a recue dog program. It’s going to be like going to college. Why do you want to risk your oh so exemplary record by harassing me?”

“Not that is a conundrum worth pondering. Perhaps you make me lose control, Miss Marshal.”

a Rafflecopter giveaway
By DawnsReadingNook at September 19, 2014

Your embarrassing moment made me laugh.