Discover the world of Elemental Magic series by author Brynna Curry. Remember to enter the rafflecopter at the end of the post to be entered to win some great prizes at the end of the tour. Tour Schedule can be found HERE 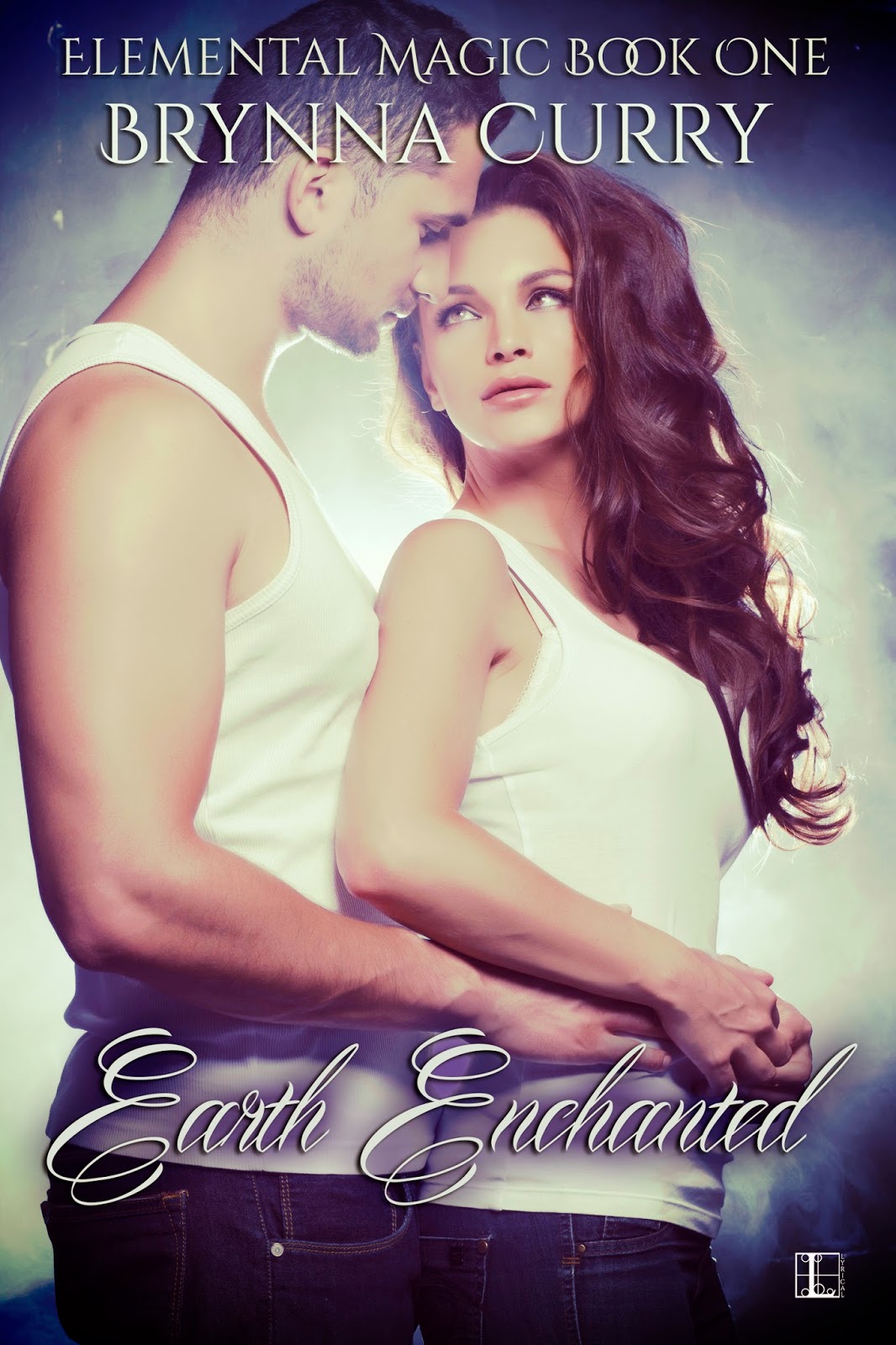 Blurb: Writer Liv Corrigan has the worst luck with men -- her telepathy tends to make them run for the hills. When she meets widower and ex-cop Jack Roarke, she decides to keep her talent hidden. Things are looking up until their third date crashes and burns as the man who murdered Jack’s wife turns out to be after him too.

Injured, Jack retreats with Liv to his house under armed guard. But with Liv’s mysteries rapidly coming unraveled, a diamond-thief killer to stop and passion in the air, the safe house is anything but safe for their hearts!

Jack scanned the bookstore as he sat in the hard metal folding chair, at the small table, and wrote. He thought his hand would fall off. Whoever said writing wasn’t real work had to have been crazy. He knew things about two hours’ worth of people their mothers probably didn’t know. Mandy Lou something or other had a granny who thought he was grade A and she was his number one fan. She didn’t look old enough to be allowed to read his brand of horror, but she had two copies of each of his books.

Jack had politely—he hoped—shrugged off the forty invitations to dinner, fourteen offers for coffee, and two very indecent proposals for ‘wild, hanging from the chandelier sex’ to quote one lovely fan. All in all, a long day barely described it, but he’d seen people and observed, that was for sure. If it helped with the new book, it might have been worth it, and then again maybe not.

Ellie dropped by to see how things were going, and then promptly ran away when he tried to beg out. He didn’t like being maneuvered, and Ellie was a champion at it. Entertaining the notion of strangling her got him through the second hour, but considering he needed a good editor, he changed his mind.

The line grew shorter. While he juggled the newest Hastings baby on his knee, which the boy’s proud papa had insisted on, Jack inscribed a message in the front cover to Mrs. Hastings, another number one fan and the mother of six children all under ten. How does she have the time to read at all? His message to her read, “Mrs. Hastings, I’m your number one fan. You rule. Jack.” Mentally saluting her efforts, he passed back junior, and sent them on their way. He automatically reached for the book a slim hand offered. Eyes down on the cover of what he’d created, he said the same thing he’d told countless others. “Hi, who should I make this out to?”

Her voice alone lifted his eyes to meet hers, a musical lilt that teased of mist and bogs, faeries and leprechauns. She was dressed professionally, but he could easily imagine her calling up a wild wind or casting spells. She was only about 5’4” and slim, claimed black Irish coloring. He saw a flash of what might have been a premonition, but after blocking the gift so long he couldn’t hold on to it. Did he smell rain? Candles or lightning? But the sun was shining. For a moment he just stared, couldn’t speak , and was certain he knew her but couldn’t remember where from.

“Is something the matter?”

He quickly signed her book, before he forgot that was the reason for their meeting in the first place. She was the last in line, and he was free. Thank God! Sorry, muse, position filled. 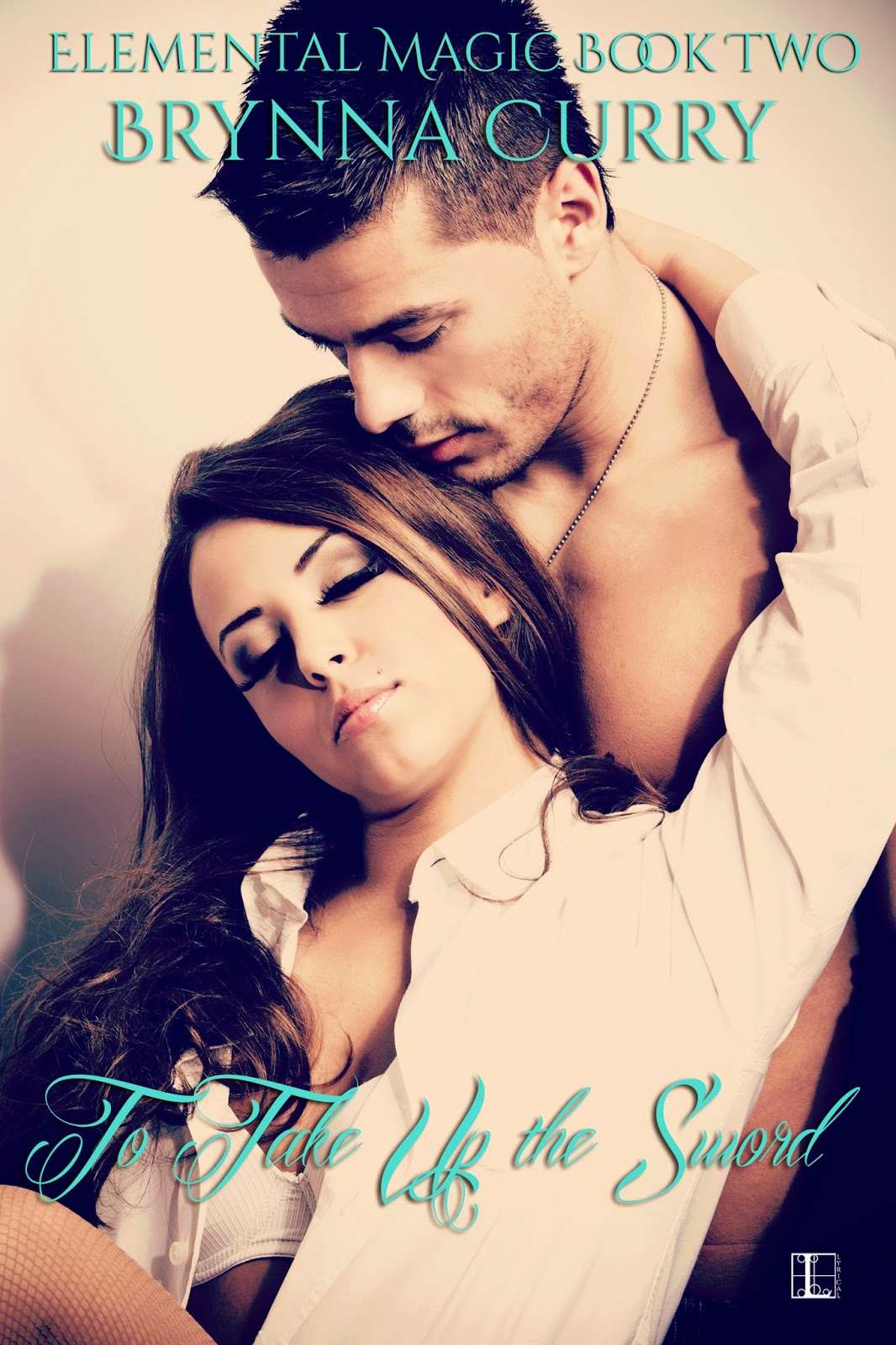 To Take Up The Sword
Elemental Magic #2
Blurb: Missing diamonds and a killer on the loose…will a schoolteacher and FBI agent escape with their lives and hearts intact?

After the acquittal of Gueraldi's right hand and favored killer for hire, Ashton Smythe, Special Agent Gabriel Spiller takes time away from his work with the FBI. Having failed in his mission to avenge his lost would be lover, Serena Roarke, Gabe returns to Alabama in search of the missing diamonds needed to reopen the investigation and to lay low from the death threats he's received since Smythe went free.

Almost two years after her sister's death, Leannan O'Neal feels the loss of Serena more now than ever. A secret meeting between them before she died left Lea with an ugly figurine and nothing but questions. Hang-up calls at work and a trashed house reminds her of the card Serena gave her. "If you find yourself in trouble, go to him and only him" were the last words her sister spoke to her.

With Smthye out for revenge and hot on her heels, Lea goes on the run in search of Serena's 'Angel', but how long can Gabe keep her alive, and is the cost worth more than her life? 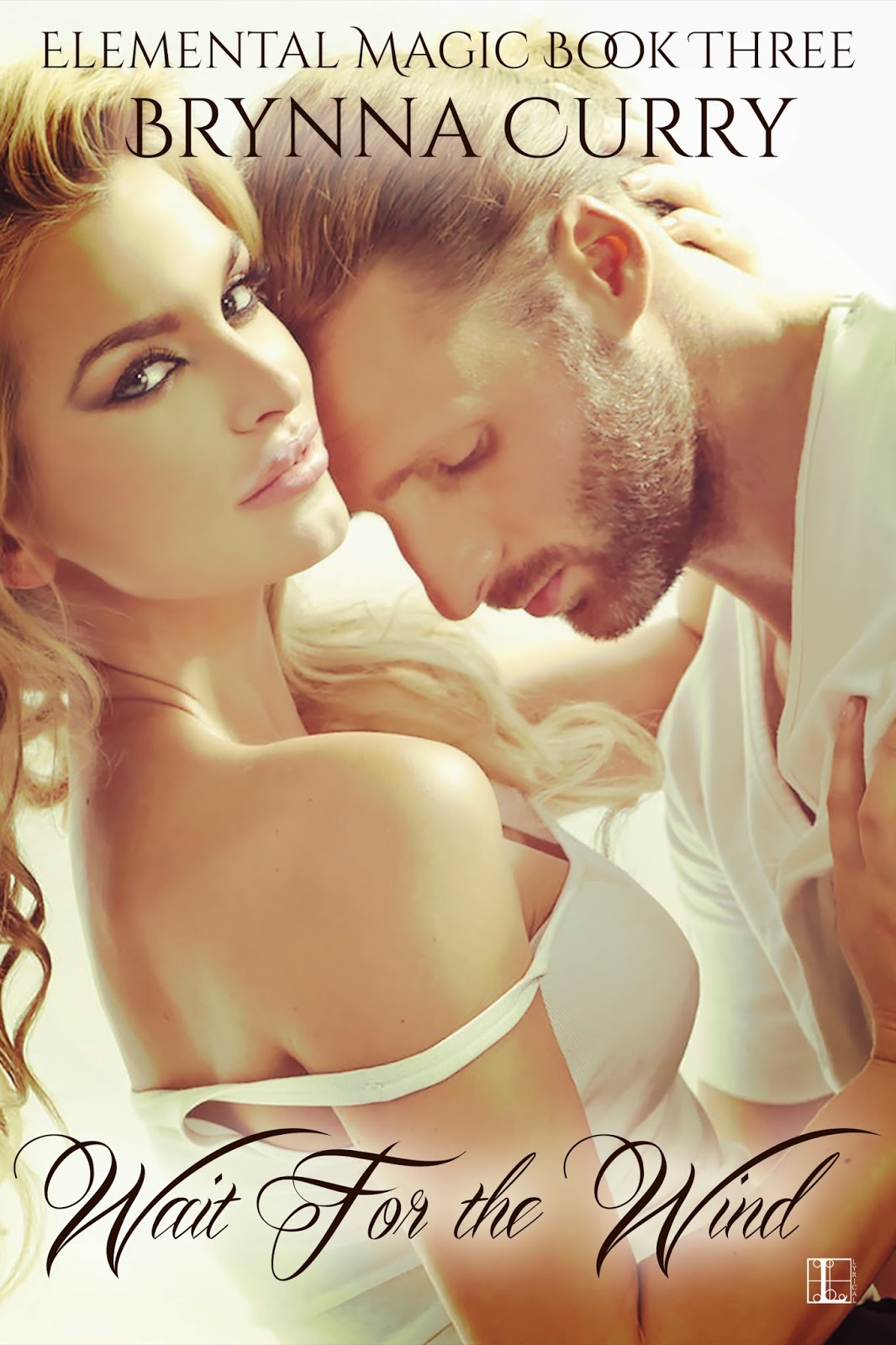 Wait for the Wind
Elemental Magic #3
Blurb:  Kate O'Connell grew up loved by the Corrigan family, all the while suffering from the inescapable reality of her own alcoholic father. At a young age she gave her heart and innocence to Ryan Corrigan. For once happiness seemed within her reach, until in one horror-filled night, the monster she called 'Daddy' changed everything.

Too many misunderstandings forced Kate and Ryan apart, but now Kate's come home to open her clinic and raise her daughter, Allaina, closer to his family. Will she be able to open Ryan's heart to his magic?

Ryan is glad to be back on Irish soil, but the reason he left still haunts him. As he tries to build a new life and redeem his past, can he forgive Kate and reclaim his healing gift in time to save his sister and her twins? 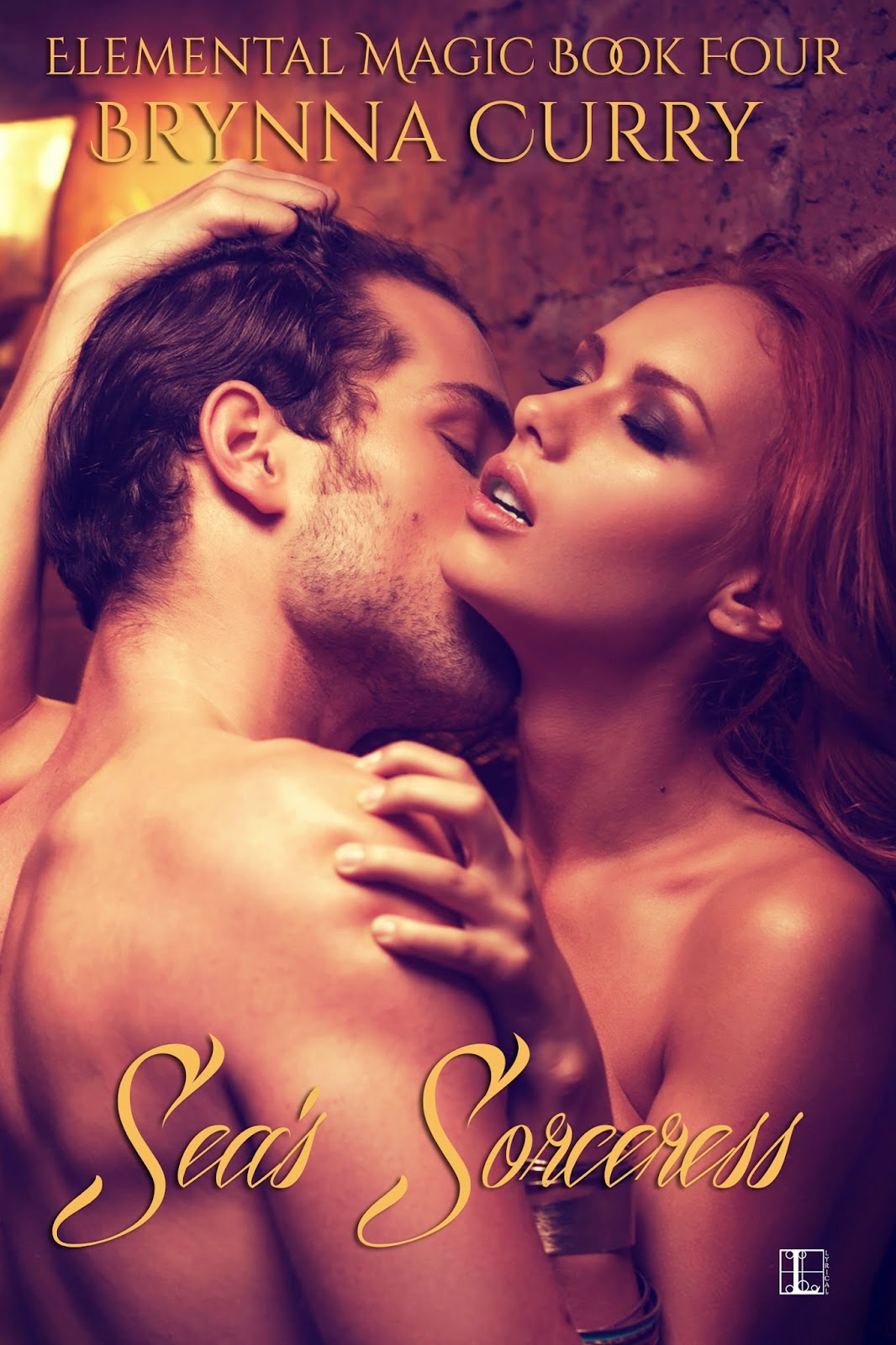 Sea’s Sorceress
Elemental Magic #4
Blurb:  Love can come along at the most inconvenient times...
Skye Corrigan treasures family above all else. Standing by his best friend Rhia while she suffers the heartache of losing her father to cancer has strengthened their childhood bond. Lately Rhia affects him in ways she never has before.
Rhiannon O'Malley shares Skye's past and hopes for a future with him, but love must come with a willing heart. Her father's terminal illness has left her in charge of the family pub. Skye has always been there for her, but when their relationship changes, will she find the courage to claim the future? Or will a thousand-year-old curse keep its grip on two hostage hearts? 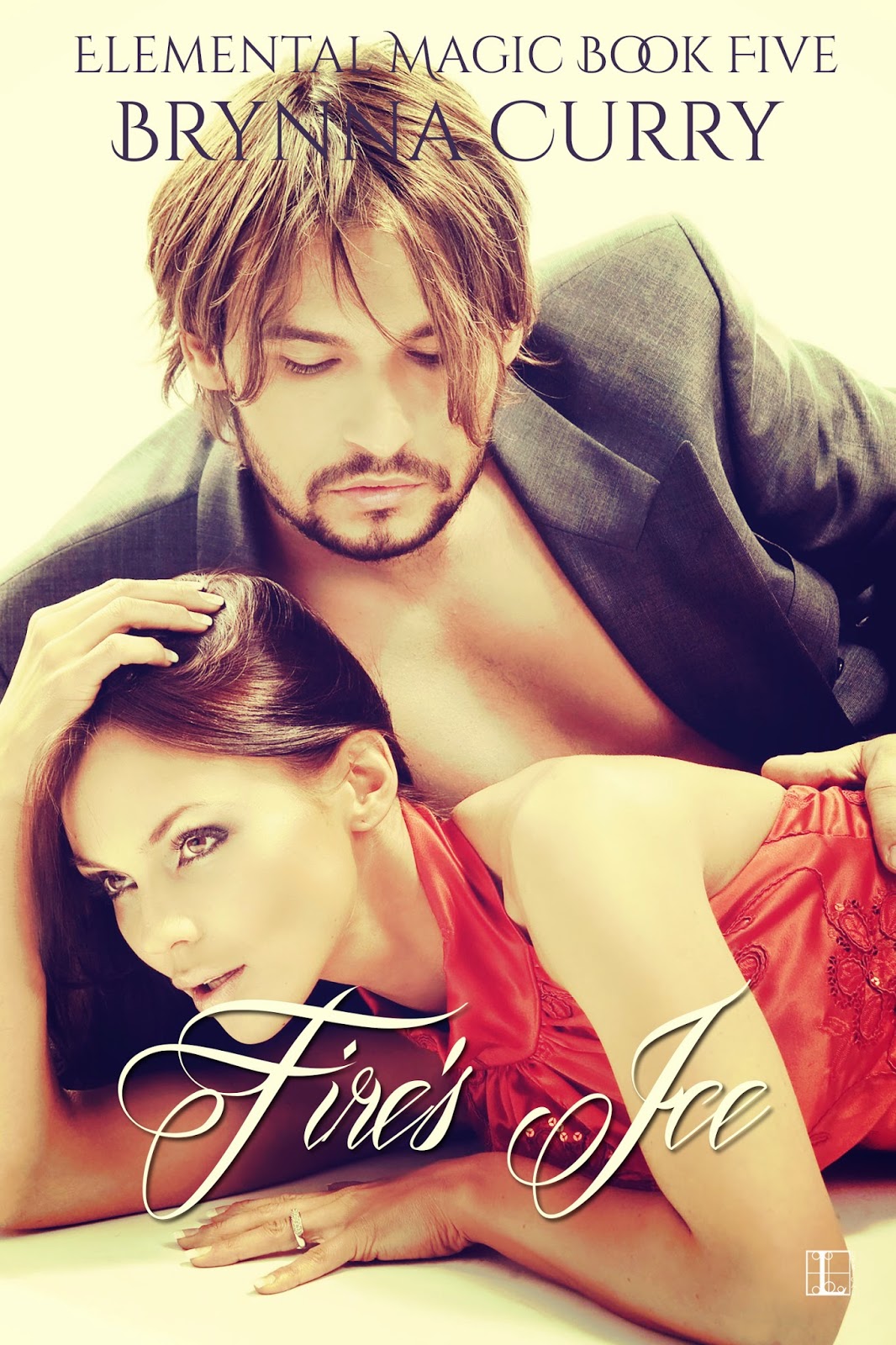 Born the son of a Scottish laird a thousand years ago, but now trapped by his cousin's spell, Devin McLoch has seen countless battles and death. The erstwhile thief has turned away from darker pursuits to lead a life of peace, protecting those he loves and considers part of his clan.

However, there is one woman he can never forget, who must be given a chance to change, to accept her heart and his.

Arianne Farrell is just as dangerous and intoxicating as her power. Imprisoned in an ancient stone dance more than a thousand years ago, her only chance at freedom from the spell is through love—a love she denied. When Devin asks for her aid to save another from imminent death, she realizes there is more at stake than just her freedom or her heart.

About the Author:  Brynna Curry was born south of the Mason-Dixon Line. After living all over the southern states, she finally landed in North Alabama where she lives with her husband and their three children. Growing up, books fueled her dreams and imagination, ultimately becoming her salvation during the hardest times in her life.Writing is her passion, but she enjoys the fun of sharing those stories with others by reviewing books and working in publicity.

When she isn’t writing or promoting, she’s often found haunting the library for new books to read or just spending an quiet evening at home with Jackie watching old westerns on TV. Although her wizards, shifters and vampires are as real to her as anyone, she insists love is the truest magic and with it every day is another wonderful adventure.

a Rafflecopter giveaway
By DawnsReadingNook at September 19, 2014