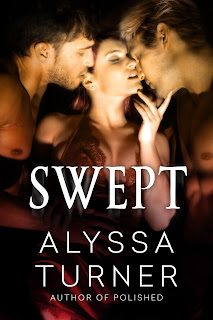 
Even a Master needs a savior...or two.

Successful engineering executive, Jack Rothman thought he was finally free to be the Dom he was meant to become. His submissives, Rory Campbell and Spencer Hartley are soon to be married, and his place as their Dominant is unshakeable. Then Jack loses the one thing a Dom requires…control over his life.

Rory can’t wait to get married, but she can’t marry both of her men—not in the eyes of the law or her overbearing, critical parents. She must find the courage to tell her parents the truth about her poly relationship, despite the sudden absence of her Dominant’s strength. If she wants the happily-ever-after wedding she’s always dreamed of, she’ll have to learn to fight for it on her own.

Spencer knows that lies are a poison that destroys from within.  Now that he’s come to terms with his bisexuality he’s ready to settle down with the woman he loves and the man he can’t live without. Only the future that seemed so bright is in danger of being swept out of his hands. He’s watching his fiancée fall apart, his Dom fade away and there’s nothing he can do about it…or is there?

“It’s so weird giving a dock slip as your address.” Spencer’s voice came from the bow of the boat. “Pizza will be here in about a half-hour. Ror? Jack?”

“Better leave some cash on the deck for it,” Jack said and grinned at her. Rory grinned back. Her wait was over. “We’re down here. Rory was taking a nap.”

“In the middle of the day? You feeling OK, babe?” Spencer rambled down the steps like a heavy drumroll and finally appeared, his performance shirt clinging to his chest with sweat.

Spencer put down the towel he had been using to wipe his forehead. She recognized the sudden shift in his posture, a different kind of attention in his crystal blue eyes. “Oh yeah? What are you in for?”

Spencer laughed. “You were warned. I heard him myself. No underwear allowed on the boat.”

Jack rolled up the sleeves on his crisp white shirt. His tie had been long discarded. Jack had no need for ties once business was concluded. She knew that the bid presentation he’d had with the corporate board of the largest mall in Boston had ended almost two hours ago. The question of what delayed him from getting back to the boat was only a mild curiosity. At the moment, she had other things on her mind.

Jack leaned down toward her, speaking his words only inches from her face. “You are on vacation, Rory. There is absolutely no reason for you to need to put anything between me and that sweetness between your legs.”

Rory scraped her bottom lip with her teeth and blinked at him. “Yes, Sir. I’m sorry, Sir.” What was it in her that made those words such a compulsion? Specifically, why was she so compelled to say those words to Jack? She was apologizing for something she’d done on purpose, with the hope his wrath would rain down on her. All the while, her shoulders slumped and her pussy wept at the sheer sound of the two words on her tongue.

This was a game she needed to play. Jack knew why. Thanks to him, so did she.

“Sit up straight and look me in the eye, Rory,’” Jack said to her, and another shiver ran down her spine as she eagerly complied.

Spencer tugged at the edges of his shirt and pulled it over his head. “Damn, I need a shower.” He licked his lips and looked at Jack. “Will you wait?”

“Take your time. Rory has a lesson to learn about patience.”

She sat on her knees, legs tucked behind, shoulders now rolled back and her hands folded in her lap. This was the stance she’d learned to take; the proper stance of a submissive.

“The sight of you like that will never get old,” Spencer said.

“Not even when I get old?” Rory replied, shifting her eyes in his direction.

Jack’s coarse growl swung her attention back to him. “You’re going to get five more lashes for that bit of self-doubt, sweetheart.”

“Yes, Sir.” She had expected as much the moment her question was in the air. Rory knew what it was to call someone Sir and mean it. The word weighed heavy, not the respectful cordiality passed from worker to boss, from student to teacher. Sir was akin to Master between Rory and Jack. He had mastered her insecurities and called her out on her insane pursuit of perfection. He was the slayer of that insidious beast inside of her, a relentless, gnawing beast that had nearly eaten her alive from the inside without even bothering to reveal itself. Spencer showed her how to love and be loved, but Jack showed her how to love herself. 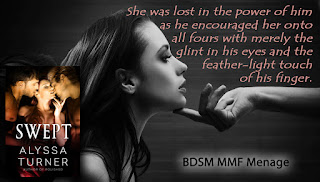 Author Bio:
If you asked her, she'd say it all started with her vast collection of paper dolls. That's how long Alyssa Turner has been crafting intricate story lines full of twists and turns and memorable characters. Thirty years later, her stories are now quite grown up.
She writes erotica and erotic romance in all lengths, having been featured in the notable anthologies of Best Women's Erotica, edited by Violet Blue and several from Rachel Kramer Bussel. With her proclivity for the ménage genre, Alyssa is often recognized for weaving complexity and emotional depth into her characters and plots. Read more about Alyssa and her works at http://AlyssaTurnerWrites.com

By DawnsReadingNook at February 20, 2016