Nothing is more heart-warming than kisses from the pet who adores you and the man who loves you, so snuggle up with VALENTINE PETS & KISSES -- an anthology of fourteen sweet romances from USA Today bestselling and award-winning authors -- and strike the perfect mood for moonlit walks and candlelight dinners with your pet and sweetheart. Don't forget to enter the giveaway at the end of the post for a chance to win an Amazon or BN gift card. The book blast is sponsored by Goddess Fish and you can find all the blast participants HERE 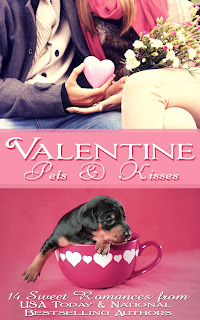 Join the authors at the release day party today and say you were sent by Goddess Fish Promotions!  https://www.facebook.com/events/1648008515464074/

Each story features a sweet romance, tender kisses and hugs, and precocious pets—all brought to you by USA Today bestselling, national/international bestselling, and award winning authors who have crafted heartwarming heroes and heroines that will make you laugh, cry, swoon, and sigh.

Candy and canines. Flowers and felines. Celebrate this Valentine's Day with your sweethearts of the human and fuzzy varieties!

Nothing is more heart-warming than kisses from the pet who adores you and the man who loves you, so snuggle up with VALENTINE PETS & KISSES and strike the perfect mood for moonlit walks and candlelight dinners with your pet and sweetheart.

Valentine Hound Dog  - Rachelle Ayala
Fashion icon Jenna Hart, along with her basset hound puppy, tries to convince a burned former fireman that beauty is never skin deep and love's arrow strikes not only the beautiful, but the bold.

The Crazy Girl’s Handbook - DelSheree Gladden
Spending the weekend babysitting her two nephews and a puppy was supposed to be fun. Sweating to death at a baseball game while getting gum in her hair, soda down her shirt, and an ice cream pedicure wasn't part of the deal. Neither was finding out the best guy she'd ever missed a blind date with had witnessed it all. Longest. Weekend. Ever.
The Vet's Valentine Gift - J.L. Campbell
Matthias Laing has snagged the woman of his dreams, but his job as a vet keeps getting him into trouble. The situation is past complicated because of the growing assortment of animals in Toni's house and to top it all, the conflict between Matthias and her ex-husband. Can Matthias and Toni's budding romance survive their challenges and if it doesn't, will Jade, her precocious five-year-old find a way to play Cupid and fix things by Valentine's Day?

Her Perfect Catch - K.L. Brady
Nerdy, struggling sports writer Melanie Vincent needs a miracle when her dream of running a nationally recognized blog hits a snag due to low readership. After Mel is gifted a pair of Super Bowl tickets for years of faithful dog sitting, she has a chance encounter with her favorite football player that leads to the inside scoop on the biggest story of her career...and maybe the love of a lifetime.

Inflamed - Jade Kerrion
Debra Martinez doesn’t believe in happy endings, until Sean Orr, Havre de Grace’s newest firefighter, shows her and her son, Aidan, a new and beautiful kind of “normal.” But the happiness can’t last—not for Sean who is on the run from his own past.

Remember When - Hope Welsh
Laura and Brent really tried to make their marriage work, but in the end, it just wasn't meant to be. Or was it? When they meet to discuss joint custody of their , they discover they have much more to talk about other than the dog.

Your Biggest Fan? - Sydney Aaliyah Michelle
Noah Patrick, NFL bad boy, has sworn off women, who only seem to want him for his fame and his money. Callie James is such a big Noah Patrick fan, she named her energetic after the man of her dreams. When they find themselves hiding out in the same Brooklyn Brownstone, a crazy blizzard, a never-ending supply of spaghetti, and a dog with identity issues bring them together even though they both have secrets that would tear them apart.

The Feline Fix - Caroline Bell Foster
Meeting Police Constable Callum Forde on the worse day of her life, makes cat lover and scientist Wendy Wilde question all that she values, her cat’s loyalty and the role science plays in love.

Trembling Hearts - Suzette Riddick
Recluse Jason Carr is living in rural after an accident leaves him physically scarred. While taking a stroll and minding his business, the spunky Lezlie Sharpe literally crashes into his life, stealing the heart of his beloved pooch, Trooper. Now, forced to share living quarters, will Lezlie capture Jason’s heart too?

Valentino, Be Mine - Tina D.C. Hayes
Kaylee Rose is thrilled when a neighbor moving out of the country asks if she'll consider taking in her teacup Yorkie, Valentino, but there are a few strings attached. When she finds out a man she can't stand is the other caretaker, she's forced to deal with the arrogant jerk until they decide who gets the pampered pooch permanently . . . or risk losing the dog to a heartbreaking fate.

Lost and Found - Jeanne Bannon
Lexie is so distraught after long-time boyfriend, Josh, dumps her, she takes a leave of absence from her teaching job. Josh leaves behind the puppy he bought for her just before things fell apart even though she’s not a dog person. Lexie contemplates giving it away but decides keep the little mischief-maker and get her some training.

While at puppy obedience school, Lexie meets Tommy, the happy-go-lucky type she could give her heart to if only she was ready. But Lexie gives Tommy the brush off and they lose touch. However, a series of events, some unfortunate, bring them together again.

Surviving - Susan Oloier
When 23-year-old Leah Newland accepts a job in and runs away from her small-town life, she expects things to change for the better. What she doesn’t expect is to lose her job, adopt a cat she hit with her car, and fall for a sexy and seemingly unavailable veterinarian. Suddenly, going back to the seems better than surviving .

- Aubrey Wynne
Eloise Kolby steps off the bus and greets with high expectations and a smile. Two months later, she’s broke, hungry and rethinking her dream. An offer to house sit provides her with too much time alone, an adopted family of kittens and a sexy postman waiting at her gate.

Victor Burnham can’t stop thinking of the beautiful, mysterious woman who just moved into his hometown. She meets him each day at the mailbox, waiting for a letter.
When the envelope finally arrives, they both must face decisions that could make their dreams come true or jeopardize their relationship forever.

Three Plus Three - Cindy Flores Martinez
A year after losing her husband, a grieving widow, Violet, and their beloved bichon frise visit their favorite place the day before Valentine's Day. While they are there, Violet meets a handsome widower who makes her feel alive again.

Her Perfect Catch by K.L. Brady

The lobby was no less elegant than the hotel's exterior, draped in luxurious natural-colored decor with reddish accents, Italian marble, and ornate European-styled furniture placed in cozy, conversational arrangements. The desk attendant, an older gray-haired lady with a southerntwang, shifted her eyes between them.

"We do, don’t we?" Dylan said, wrapping his arm around Mel's shoulder, grinning as if he won the lottery.

With one eyebrow up, Mel glanced at his hand and then brushed it off. "Uh, no, no. We're

"Oh, I get it. Friends with benefits." She winked.

"Well, if he's not with you"—she reached between her ample bosom and pulled out a

business card—“he can give me a call. I get off in an hour."

"Uh, ma'am, we'd just like to check in, please. Any additional rooms available?"

She pursed her lips and gave Mel every bit of her attitude. "Afraid not. We're all booked up until Monday. Super Bowl."

Mel handed the woman her credit card, waited for her to process it for incidentals and hand her the keycards. “Room 315. Up the elevator to the third floor; your room is on the left at the end of the hall.” As Mel dragged her suitcase and Mack toward the elevator, his carrier handle started to cut into her finger so she swapped bags with Dylan. Then they pressed ahead through the pristine, marble lobby to catch a ride to their room.

"Mel, why do you keep doing that?" Dylan asked as they waited for the elevator to alert its arrival.

"Telling everyone we're not together as if I’m a leper or something."

"If my memory serves me correctly, denying that we're a couple used to be your role. How many times have you told your potential prey that I'm your little sister?" Mel responded, giving him the side eye. "Guess you taught me well, Obi-Wan."

He grimaced as the elevator doors opened, motioned her inside, and pressed “3.”

"Listen, I've wanted to talk to you about Gizelle. She didn't cancel. I did...and there's a

reason, something I didn't realize until recently."

"How many times did I tell you Gizelle was all wrong for you?"

"About a thousand, but that's not what I'm—"

She let out a long exasperated sigh. "Dylan, while I just love hearing about your sexual

exploits and break-ups," she said facetiously, "how about you hold that thought until after I'm out of a hot shower and into some pajamas."

"But you don't understand. What I'm trying to say is—"

Just then the doors opened and Mel stepped off the elevator. It was too late when she heard someone yell, "Go deep!"

An object collided against her temple, causing a dull aching pain to stretch across her skull and into her neck. Dylan's voice screamed, "Watch out!" before all light and sound faded and the hall went black.

Rachelle Ayala From romantic suspense to sweet contemporaries, I write from my heart and love to include children and pets in my stories.

DelSheree Gladden is a USA Today bestselling young adult and romance author, whose writing includes everything from dystopian and Native American mythology to sweet and funny romances.

K.L. Brady is a multi-award-winning author of sweet and sexy romantic comedies, young adult romance, and a spy thriller series based on her career in intelligence.

Sydney Aaliyah MIchelle is a contemporary romance writer, a voracious reader and movie fanatic who hails from .

Suzette Riddick is a wife, mother and nurse practitioner who enjoys writing romance novels with a touch of reality.

Jeanne Bannon is an international best-selling author of paranormal and romance fiction with twenty-five years of experience in the publishing industry.

Susan Oloier is a mother and educator who writes memoir, as well as adult and young adult contemporary fiction.

Aubrey Wynne is an elementary teacher by trade, champion of children and animals by conscience, and author by night.

a Rafflecopter giveaway
By DawnsReadingNook at February 02, 2016

Thanks for hosting! Readers, the book is currently only $0.99!

Thanks for having us on your site! We're so happy it's release day and hope everyone who picks up a copy enjoys it!