Don't forget to enter the giveaway at the end of the post. Houston Havens will be awarding two winners a choice of one of the first three books in the Psychic Menage series to a randomly drawn winner via rafflecopter during the tour. The tour is sponsored by Goddess Fish Promotions and you can find all the tour stops HERE 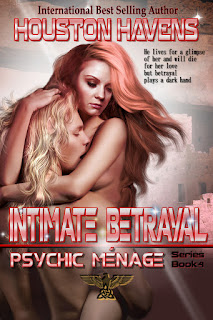 Kindise Wyatt escapes her Star Rider captor and returns to Earth. With the help of a sexy Old World Mole and his mysterious friend, she's determined to uncover the whereabouts of her lover. Instead, she finds nothing but betrayal and her captor in pursuit.

On the lam after betraying his evil ruler, ex-Dirt Dweller and drifter Jaden Valenti confirms his name is on a hit list. Finding what he believes will be safety amongst the Airbornes, he recreates himself and hides his past until trouble walks back into his life in
the name of Kindise Wyatt, the woman he was ordered to assassinate and didn't.

Due to the obsessions of a Fae woman Sori gave up his hardearned royal title and left his homeland of Elfame. Love is the furthest thing from his mind until he is sent in Jaden's place to pick-up some cargo...human cargo in the form Kindise Wyatt. He feels the Fae magnetism of his soulmate in her. Problem is; she's in love with someone else.

Will Jaden fulfill his orders to kill Kindise and get his name removed from the list, or will his secret be exposed and betray the friendship he has with Sori? Does Sori help Kindise find her lover, or will a love between them have a chance to flourish before a fatal attraction and a determined captor rip their love asunder? Will Kindise find true love or will betrayals at every turn crush the fight out of her? Can she find her inner strengths to keep fighting and lead The Freedom Fighters to defeat the Dirt Dweller elites, once and for all?

She snapped her head in his direction. "I beg your pardon."

Amusement raised Jaden's brow along with his coffee cup. His eyes sparkled over the rim, forcing her breath to catch in her chest.

What in the hell did he mean by that?

Sori covered the smile he was fighting by pretending to scratch his eye, but his amusement was still evident in his tone when he spoke. "What Jaden's asking is…what's your hurry?"

"I've already imposed quite a bit on your kindness."

Choosing to ignore Jaden's remark, she continued. "I don't want to take advantage of your hospitality. I'd like to find Lytell soon, it's been awhile and I missed him very much."

"Yeah?" The clank of Jaden's cup crashing down on its saucer once again caused her shoulders to jump. He leaned forward, pushing the bowl of sugar-covered strawberries toward her. "Care for some fruit, while you tell us what you miss most about him?"

She kept her focus on Sori. "Will Jaden be joining us as well?"

His brows pressed together as his glance slid in confusion over to Jaden then jumped back to her. "Ah--"

A sharp snapping of Jaden's fingers grabbed her attention. When she looked, he smirked. "No, I won't. But thanks for asking. Nice to know you'll miss me."

Kindise tried but failed to stop her mouth from falling open. Incensed by his insinuations in front of Sori.

"Ah, someone want to fill me in?" His glance ricocheted between them.

"There's nothing to tell." She got up, spun on her heels and marched from the kitchen muttering. "I'll be in my room. Let me know when you're ready to go."

Jaden held up the bowl of strawberries. "Sure you wouldn't like some sweetness before you go?"

a Rafflecopter giveaway
By DawnsReadingNook at January 27, 2016

What character in a book would you like to be best friends with?

Thank you Goddess Fish for such an awesome tour! And I thank my hostess as well for such a beautiful post and Mai!

Hi Sweetie...interesting question...Well I loved Ortello who showed up in book one and of course most of us know what happened to him soooo my next pick (gosh this is hard) would be Nikias (Phantom Desire BK2) or Sori (Intimate Betrayal BK4)...which would you pick?

Thanks for the awesome questions Mai.