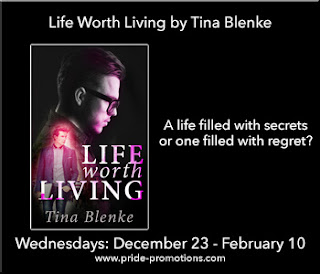 Don't forget to enter the giveaway for a chance to win one of three amazon gift cards from the author. The giveaway ends on February 17th. The tour is sponsored by Pride Promotions.

Talking with the author, Tina Blenke...

Today I’m very lucky to be interviewing Tina Blenke author of Life Worth Living.
Hi Tina, thank you for agreeing to this interview. Tell us a little about yourself, your background, and your current book.

Thanks so much for having me today. I’ve been in the M/M genre for a couple of years now and started out with a paranormal novel about a pansexual vampire with amnesia. I followed that with a series of wolf shifter short stories and now I’m following it up with my new contemporary novel. This story is a sweet college crush that grows into a summer love but there’s a lot of turmoil in their lives. So many secrets surround them, both their own and those of others, that threaten to upend their love and in the end they must choose to let go and be honest with themselves before they can have that happy ever after.

Give us a to-do list for one of your characters.

Quentin:
1.      Graduate with honors with my undergraduate in Biochemistry and Molecular Biology with a minor in Chemistry
2.      Send in my graduate school acceptance letter to New York University to their School of Medicine
3.      Confirm the off-campus housing to start in September – first time living alone!
4.      Learn how to make a soufflé from scratch
5.      Invest in an apron – not a high priority unless Phil will be staying through the summer
6.      Meet with the lawyer to find out the terms of my trust fund
7.      Need to get myself off of social media and get my own phone so the parents can’t track me
8.      Stay out of the public eye so the parents will stop having me watched
9.      Continue working out – need to find a studio that can be discreet
10. Find someone to confide in and make love to him until the sun comes up
11.  Burn this list! 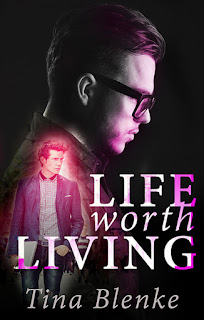 Blurb:
Jake has been hiding in plain sight, always a few rows behind his straight-crush Quentin during their four years of college. He’s been successful so far but just as they’re about to graduate, Quentin finds out Jake’s secret and Quentin shares one of his own. He’s in the closet.

Jake isn’t about to let this opportunity pass him by especially when Quentin is scheduled to leave for the East coast in a few short summer months. Willing to keep Quentin’s secret from his upper crust politically-fueled homophobic family, Jake shares his bed and eventually his heart.

Quentin’s life in the closet is non-negotiable. His family has strong political ties and any word about their son’s sexuality would cast him out of the family and out of his inheritance which he desperately needs to finish his education. He’s been successful keeping his sexuality a secret for years until he meets the irresistibly adorable Jake at an early graduation party.

Quentin is unable to ignore his desire for Jake and makes the life-altering leap that holds his future in the balance. Locked away from the public eye, the two men admit their love for one another. In three short months, they will be forced to part ways for graduate school but the challenges of potential scrutiny, family commitment and an un-promised future may prove to be more than they can overcome.

Excerpt:
“Cora? He’s really gone, isn’t he?”
“You did what you had to do to save both your life and his career. You didn’t do a goddamned thing wrong, you hear me? You are one of the bravest men I know,” she growled.
“Yeah, right. I’m the gayest man you know.”
“You shut the fuck up right now, Jake. I don’t let anyone bad-mouth you around me and that includes you. It takes a real man to stand up for who he truly is on the inside. The easy way out would be to hide who you are and live in the closet for fear of what the world will say or do to you.”
“Now that’s not fair,” I argued immediately, thinking of Quentin’s situation.
“And for what? Admitting that you want to love another man? It’s a beautiful romantic notion, Jake. You throw yourself bare to the world for love, the noblest feeling in the world, and all you expect in return is someone to return the feeling. And what does that rat bastard do? He shows you what it feels like to be loved, only there was a condition on it, wasn’t there? As long as he could hide you from the world and not be proud of the honest, kind and decent man that you are. He should have been yelling your name from the mountains or something. Instead? Instead, he runs and hides so he can save his face from his family.”

Tina is a retired Air Force brat and has lived in several states as well as a handful of countries. She has always had a soft spot for literature and is a voracious reader. When she isn't writing, she can be found cuddled up with a good book. Though Tina adores a thrilling novel with sappy lovesick heroes, she is terrified of things that go bump in the night. This makes for quite a complicated relationship with zombies, something that she just can't get enough of.

a Rafflecopter giveaway
By DawnsReadingNook at January 27, 2016