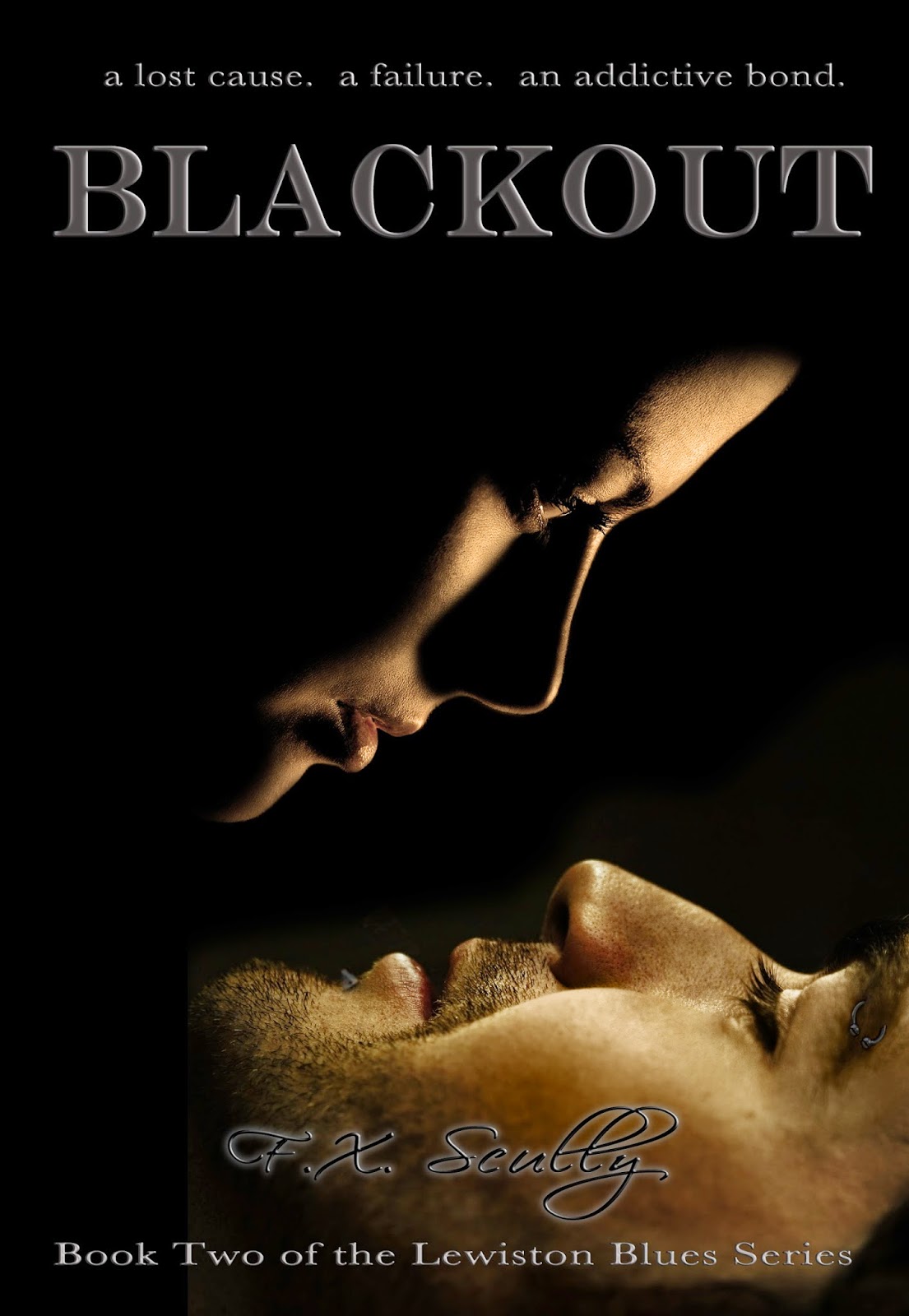 Book Title:  Blackout
Author: F.X. Scully
Genre: Contemporary Adult Romance
Release Date:April 30, 2014
Hosted by: Book Enthusiast Promotions
Ross Black is a failure.
He failed to protect his little brother from their past.
He failed to keep him out of trouble.
And now he’s having trouble holding onto the one girl who gets him. The one who makes him want to act like more like a man and less of an asshole. But he has a choice to make--take care of his brother or take care his heart. It's not an easy decision especially considering he's finally done something he never thought was possible: Fall in love.
Sheila Carlson is a lost cause.
She lost her sister.
She lost her dream.
And now she’s about to lose the one person she can count on. The one who makes her forget the worst parts of her life. When she learns a truth about her sister, she must decide what's more important, doing what’s right or what feels good.
Despite their issues, Sheila and Ross have something. It’s real. It’s raw. It’s probably wrong. But they’re determined to hold on for as long as they can. Especially if it means letting go of the things they’d rather forget.

Excerpt:
I tap on the window and it takes a full thirty seconds before she stops glaring at me and finally winds it down.
“I can’t believe you just did that.”
“I know,” I say. “I’m sorry. Cole and I have history and…it was a misunderstanding.”
She crosses her arms. “What kind of misunderstanding?”
“I thought he was—he—look, don’t worry about it okay? We cleared the air.” I open the car door, then squat down next to her. “Have you thought about what I said? About coming home?”
Sheila looks away and through the windshield. “Of course I’ve thought about it. I’m not sure how well that will go over with Maya though.”
“Hey.” I place my palm down on her lap and she tenses but, as I allow my fingers to move in slow circles, I can feel her relax against my touch. “Maya was a mistake. And I’ve felt like shit about it ever since. Even if we weren’t…I don’t love Maya. We’ve been over for a long time. It was a moment of weakness. I was feeling bad about myself. You had left, she was there. That’s it. It’s not going to happen again.”
“What about the other night?” she asks. “After your gig. I know what I saw.”
“What did you see?”
She opens her mouth and closes it again. Then she licks her lips and says, “nothing.”
“So will you come back?”
“I might not have a choice. Mr. Rose comes back in two days. Maybe I should just go home. Deal with real life. Everyone seems to think I’m doing a pretty shitty job with that anyway.”
“Can they blame you?”
She smiles. “You might be the only one who’s willing to give me a break.”
“Don’t go home,” I say. “Not yet. You can stay with me. You know I don’t mind.” Why the hell did I just say that? Everything Cole’s convinced me to do is for that reason and that reason only. To get her to deal with her issues, reconcile with her family. And then there’s Luke. “I mean, I definitely think you should go home,” I add. “At some point. But not until you’re ready. And maybe you’re not ready. But that’s okay. I can help.”
Her hand brushes against mine, before we entwine fingers. “You going to get me happy, Ross?” she asks with a chuckle.
I laugh. “Cole told you about that, huh?”
“I think it’s sweet what you did for him. It’s totally weird to imagine the two of you as friends, but he was lucky to have a friend like you.”
I can’t help myself. I place my palm against her face and stroke her cheek with my thumb. “I can be that for you, Blue. I can be anything you want if it’ll make you happy. Anything. I just want you to be okay.”
“What about Maya?” she asks.
“What about her? I told you, she—”
“How you feel about her and how she clearly feels about you are two different things. She’s going to be everywhere. You two are business partners now. You don’t think that’s going to be a problem?” She shakes her head. “I’ve had enough love triangles for a lifetime,” she adds with a weak smile.
I pull her toward me and, as twisted and confusing as I know it’s going to make things, I kiss her anyway. I kiss her hard and deep, holding her head between my hands, raking my fingers through her hair. I kiss her for every day I haven’t been able to taste or smell her since she walked out and for every day I know I’m going to be forced to give up when all is said and done. And then I pull back. “This isn’t a triangle,” I say firmly. “Not by a long shot.”
About the Author 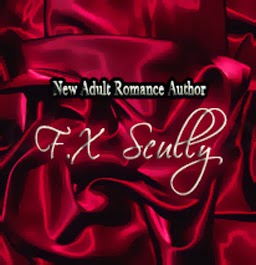 F.X. Scully loves romance, but she doesn't write your typical Happily Ever After. Because let's face it, in the real world, it can sometimes take a lot of angst and pain before you get there. And some of us never do. But since most of us pick up books to escape the real world, her stories don't lack hot boyfriends and sexy encounters. Neither will she leave you completely heart broken, sobbing into a tub of ice cream. Rest assured you'll be on a roller coaster, but you'll be glad you went along for the ride.

You can read her extended bio here! 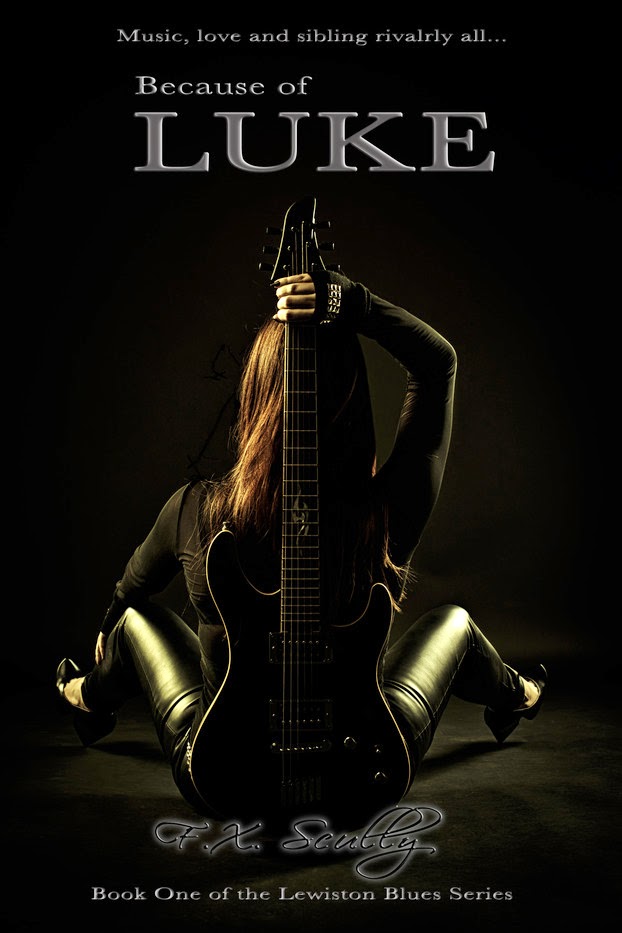 Thank you so much for sharing this.