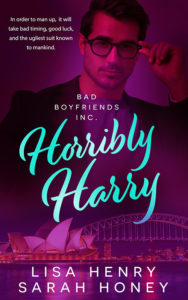 Bad Boyfriend, Inc—when you can’t find a good boyfriend, why not hire a bad one instead?

To supplement his income while he’s completing his Early Education degree, Harry Townsend hires himself out as a terrible date—for a set fee, he’ll horrify parents and family members in all sorts of interesting ways. But when it comes to actual relationships—and sex—Harry doesn’t get the appeal. He doesn’t get the same tingly feelings everyone else seems to when they meet someone attractive, and he’s fine with that. He’d rather spend his evenings watching TV anyway.

Jack Windsor abandoned his uni degree to do an apprenticeship as a mechanic, much to his parents’ dismay. He’s happy with his choices, but leaving uni meant losing his accommodation, and now he’s crashing on his sister Mia’s couch. It isn’t ideal, but it’s only until he finds something else—which is proving difficult in Sydney’s brutal rental market.

When Jack almost kills Harry with a strawberry smoothie, he discovers that not only was Harry’s disastrous date with Mia a set up, but that Harry is looking for a roommate. Moving in with Harry is great, if only he wasn’t so distractingly cute—and totally uninterested in Jack. Except as they grow closer as friends, for the first time in his life, Harry tells Jack he’s developing feelings for him—tingly ones.

But how can Harry and Jack be together when Jack’s family thinks that Harry is the worst human being in the universe? And how can Jack convince them that his Bad Boyfriend is the best boyfriend he’s ever had, without admitting that Mia hired him to be terrible to them? When an approaching family event brings everything to a head, Jack’s going to have to step up to prove to Harry that he wants him in his life. And it might just take some bad timing, some good luck and the ugliest suit known to mankind.

“Hello, Beryl,” Harry said through clenched teeth as he slid the garish Hawaiian shirt onto the counter.

Beryl narrowed her one good eye at him. “Mr Townsend. I believe you’re banned from this shop.”

Harry stared her down as he lifted his chin. “No. I spoke to Agnes, and she said that you’re not in charge so you can’t ban anyone. And she said, ‘looking at someone funny’ wasn’t grounds for a ban anyway.”

A flicker of fear passed through her good eye and, he thought, something almost like admiration, too. She clearly never would have thought he’d have the balls to go above her head to Agnes, but she’d underestimated him and his need for this incredibly ugly Hawaiian shirt. It was blue, with a typical background of islands and boats and palm trees and flowers, but what made it truly terrible was that, at one time, it had been someone’s custom gag gift. Harry had no idea whose grinning face it was that had been printed all over the fabric, but the second he’d seen it hanging in the slightly grimy front window of the Newtown Op Shop, he’d known he had to have it. The guy on the shirt had a combover. It was perfect!

Beryl’s mouth pressed into a thin, wrinkled line as she tugged the shirt over and inspected the tag. “Twenty dollars,” she announced.

Beryl reached up and adjusted her not-even-close-to-flesh-coloured eyepatch. She told people she’d recently had cataract surgery, but Harry suspected she was hiding an evil eye. The sort that would melt people’s faces off if she looked at them. “Agnes might be the manager, but I’m in charge of pricing, and this shirt is twenty dollars.”

She picked up a pen from the jar beside the cash register and changed the price.

“I need that shirt!”

Her sour mouth turned up in a grin. “And you can have it, for twenty dollars.” She tapped the handwritten sign taped to the side of the register—No arguing with staff.

Beryl’s grin widened. “I wrote it when I saw you at the door.”

Harry gasped. “But I really need that shirt, Beryl! Please!”

She unpeeled the sign from the register, wrote Or begging on it, then stuck it back up.

Harry drew a deep breath, then wished he hadn’t, because, like all op shops, this one smelled musty and weird. He pulled his wallet out of the pocket of his jeans. It was depressingly thin. He tugged out a twenty, watching Beryl’s eye light up with victory, then hummed and put it back. “Actually, I think I’ll save my money.”

Beryl glowered at him.

“Yeah,” Harry said, even though she hadn’t asked him anything. “I came past the bakery on the way here, and they were just icing the coffee scrolls. I might have to buy a couple. They’re so good. They always sell out really quickly, don’t they? Like, there probably won’t be any left at all in about twenty minutes, once word gets out on the street.”

Beryl’s sweet tooth was legendary, and it was the only sweet thing about her. She looked at her watch.

He stared at her and she stared back at him.

He sighed. “It’ll probably take me a while. A good, long while.”

Four minutes later and five dollars poorer, he was stepping outside the op shop with the ugly Hawaiian shirt in his backpack.

When he wore it, it was going to feel like victory.

Harry met Angie Lau outside the old geology building where she was sitting with a group of friends. She was short and button-nosed, and wearing a bright pink sweater with a cat on it. Harry was tempted to show her his amazingly ugly Hawaiian shirt, then thought he’d better not, just in case she wasn’t wearing the sweater ironically.

Angie’s friends looked him up and down speculatively. Angie sighed and shoved her lunch containers into a tote bag before climbing to her feet. “I’m Angie. Let’s go talk over here.”

Harry walked with her to the shade of a large tree. “When we talked on the phone, you said you were interested in a lunch date? With your parents, right?”

Angie chewed on her bottom lip and bobbed her head in a nod.

“Tell me about them,” he suggested. “What are you looking for out of this? Do you have a boyfriend they don’t approve of?”

Her eyes grew large. “No! I don’t have a boyfriend. I don’t want a boyfriend. I want to do my Master’s, but my dad is super old-fashioned and thinks that if I study any more my womb will shrivel up and fall out, and my mum agrees with him, and last week we were arguing and I said I was sick of them trying to set me up with every nice Chinese boy they meet, and Mum said that wasn’t true, and they’d be happy with literally any boy I dated, as long as I found one.” She stopped at last and drew a breath. “I’m babbling, aren’t I?”

“It’s fine,” Harry assured her. “So you want to test that theory?”

Angie rolled her eyes. “It’s so stupid! But they’re driving me nuts, and my friend Anna said she knew this girl who hired this fake boyfriend who was a theatre kid, and…” She shrugged. “And here I am.”

“That would be Ambrose,” he said. “I took over from him. Okay, so basically you want to turn up to lunch with a boyfriend who is so awful they’ll be happier you’re single, right?”

She flashed him an anxious smile. “Right.”

“Okay,” he said. “So, the deal is, you pay for my lunch and also my fee on top of that. I have like a sliding scale thing, depending on how big you want me to go, or if I have to get anyone else involved.”

Her brow crinkled. “Anyone else?”

“Yeah, for an extra fifty my housemate will turn up and say he’s my parole officer and remind me that I can’t be within two hundred metres of a school.”

“For an extra hundred, he’ll pretend to be a detective and arrest me on a warrant.”

“Oh, wow. I don’t think any of that is necessary.”

“Okay, then. What flavour of awful did you want? Ambrose specialised in ‘hot but an asshole’ but, well”—Harry gestured to his distinctly un-muscled physique—“I’m built in a way that lends itself more towards awkwardly terrible. Bad clothes, bad past, ‘society’s out to get me’ kind of thing. Would you prefer me to be unemployed, or working at something really questionable?”

Angie gave a grin that was ever so slightly evil. “Definitely unemployed. And if you could turn up late and drunk, that’d be ideal.”

Choose Your Store
First For Romance 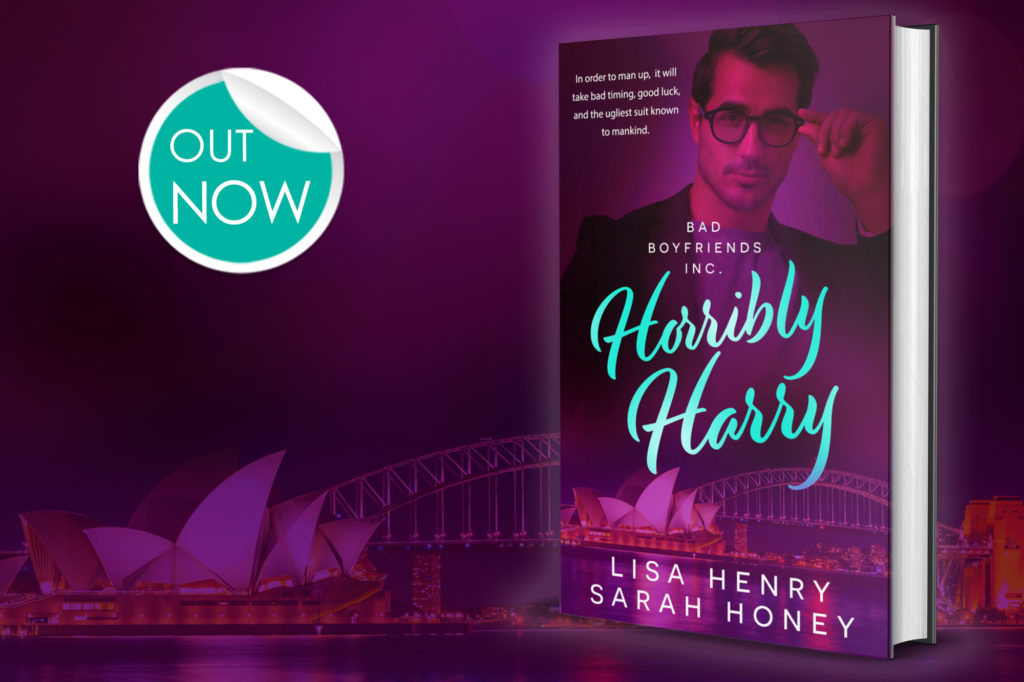 Lisa likes to tell stories, mostly with hot guys and happily ever afters.

Lisa lives in tropical North Queensland, Australia. She doesn’t know why, because she hates the heat, but she suspects she’s too lazy to move. She spends half her time slaving away as a government minion, and the other half plotting her escape.

She attended university at sixteen, not because she was a child prodigy or anything, but because of a mix-up between international school systems early in life. She studied History and English, neither of them very thoroughly.

Lisa has been published since 2012, and was a LAMBDA finalist for her quirky, awkward coming-of-age romance Adulting 101, and a Rainbow Awards finalist for 2019’s Anhaga. 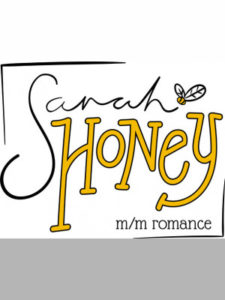 Sarah started life in New Zealand. She came to Australia for a working holiday, loved it, and never left. She lives in Western Australia with her partner, two cats, two dogs and a life-size replica TARDIS.

She spends half her time at a day job and the rest of her time reading and writing about clueless men falling in love.

Her proudest achievements include having adult kids who will still be seen with her in public, the ability to make a decent sourdough loaf, and knowing all the words to Bohemian Rhapsody.

Awfully Ambrose will be her fifth published novel in collaboration with Lisa Henry.

Enter for the chance to win a $50.00 First for Romance Gift Card! Competition hosted by Totally Entwined Group.