This post is part of a virtual book tour organized by Goddess Fish Promotions. January Bain will be awarding a $50 Amazon GC to a randomly drawn winner via rafflecopter during the tour. Click on the tour banner to see the other stops on the tour. 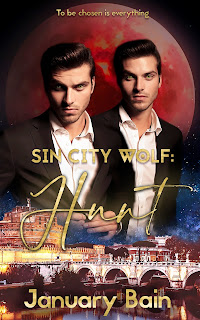 To be chosen is everything.
Billionaires. Scholars. Relic hunters.
Alessandro and Maximus Luceres are a united force and dangerous wolves to cross. Members of the powerful House of Luceres, they have spent their lifetimes searching the world over for the Lupus Sanguis Chalice, the fabled wolf blood chalice reputed to save the life of a human bitten by a werewolf during the first full moon.

But never in all their travels did the twins expect to find their possible Forever Mate, much less discover the beautiful Trinity Wells to be in league with their sworn enemies, the nefarious House of Ribelle, who are seeking the precious chalice by any means necessary and want Trinity to mate with one of their own.

Shockingly, Trinity is bitten by a Nomad wolf, starting the clock ticking down to her possibly fatal transformation and making the discovery of the chalice all that more vital.

Will Trinity survive the change…and unite the pair of brothers rivaling to be her Forever Mates?

Three weeks later Alessandro Luceres crept up the steep stone steps of Rocco Maggiore Castle, listening intently. The ancient fortress was built on a rocky promontory, the tower jutting out over the valley below. The image of a great battle filled his mind. It had been between a priest and a suspected werewolf, and the man of God had struck down the beast with a silver crucifix, killing him on the spot. It was a legend not even the townspeople knew of as the priest had also died soon after of his injuries, never to regain consciousness. Their spirits lingered still, linked by mortal combat. He crossed himself, offering a whispered prayer of release in Italian, “Possa la vostra anima trovare rifugio e guarigione in Cielo.”

“I doubt their souls will ever find refuge and healing in heaven, brother,” Maximus said. His twin spared him a backward glance as he climbed the steps two at a time. With their mind connection, he’d caught a glimpse of what Maximus had planned for after the job, which explained his hurried actions. He had his sights focused on a certain female.

“If we find it, there will be more than enough healing to go around,” Alessandro mused. No drawing existed of the Lupus Sanguis Chalice they were hunting. With it made from the bone and blood of the original wolf, its legendary status had kept a handful of treasure hunters fascinated for centuries, the quest handed down from father to son. Could it really do what it was purported to do? Ease the transformation of human to wolf? If so, the House of Luceres stood on the threshold of a brand-new era, unlike any that had come before. Finally, their numbers could grow, giving them increased strength in the modern world…if care was taken in the process.

“Where’s the faith, brother? It could very well be here. The chalice has to be somewhere, right?”

Maximus had always had an excess of confidence. Some might call it hubris. Perhaps his legendary skills at anything he pursued was reason enough. “We can’t be certain. Maybe it was never meant to be found. It will change things—maybe too much. If it ever fell into the wrong hands, think of what might happen?”

Alessandro shivered, imagining a vast horde of werewolves being created and taking over the world. As it stood now, few humans survived a werewolf bite. The majority of the Luceres numbers were from an ancient bloodline from the founding of Rome, and they were blessed with the DNA of the original wolf, guaranteeing a smooth change. They still found one of their original number on occasion, like his alpha and brother’s Forever Mate, Everly Affini. But it happened so rarely now that too many males were without their mate. And moon sickness lurked for those unable to forge a permanent bond.

“Shush, I hear something.”

A slight furtive scratching echoed in the vaulted staircase. Maximus pointed ahead. In the tower. Human. A faint hint of wolf gave him pause. What was this? 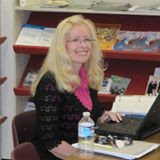 January Bain has wished on every falling star, every blown-out birthday candle, and every coin thrown in a fountain to be a storyteller. To share the tales of high adventure, mysteries, and fast-paced thrillers she has dreamed of all her life. The story you now have in your hands is the compilation of a lot of things manifesting itself for this special series. Hundreds of hours spent researching the unusual and the mundane have come together to create a series that features strong women who don’t take life too seriously, wild adventures full of twists and unforeseen turns, and hot complicated men who aren’t afraid to take risks.

If you are looking for January Bain, you can find her hard at work every morning without fail in her office with two furry babies trying to prove who does a better job of guarding the doorway. And, of course, she’s married to the most romantic man! Who once famously remarked to her inquiry about buying fresh flowers for their home every week, “Give me one good reason why not?” Leaving her speechless and knocking her head against the proverbial wall for being so darn foolish. She loves flowers.

If you wish to connect in the virtual world she is easily found on Facebook, twitter and writes a weekly blog about her journey on Blogger. Oh, and she loves to talk books…

By DawnsReadingNook at September 22, 2021

Thanks so much for hosting my book tour! It is greatly appreciated!

I love the cover, synopsis and excerpt, this is a must read for me. Thank you for sharing your book and author details and for offering a giveaway