Blurb Tour/GIVEAWAY: The Lady and the Texan

Check out the newest book from author Bobbi Smith, The Lady and the Texan. Get ready for the adventure, the romance and more. The author is giving away a $10 amazon or BN gift card during the tour so make sure to enter the giveaway. You can find all the tour stops HERE. This tour is sponsored by Goddess Fish Promotions. 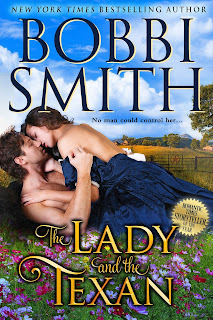 The Lady and the Texan

A firebrand since the day she was born, Amanda Taylor always stood up for what she believed in. Growing up in Texas, she could ride and shoot with the best of the boys before being sent back East for a more refined education. A firm believer in women’s rights, she was not going to let any man control her—especially a man like the rough-and-ready gunslinger Jack Logan, who had been sent by her father to escort her safely back to Texas.

After a deadly run-in with the infamous El Diablo, Jack Logan left the Texas Rangers, no longer able to trust his instincts—or any woman. He knew Dan Taylor’s daughter was trouble, and yet her defiant spirit only spurred his hunger for her. Jack discovered that keeping the dark-haired tigress at bay was a lot harder than outsmarting the outlaws who were after him—and surrendering to the sweet fury in her arms was a heck of a lot riskier.

Jack Logan was not in the best mood as he stared out the window of his hired carriage. He’d thought it would be simple, traveling to Philadelphia to escort Amanda Taylor back to Texas to her father. He’d made it to the Randall home, but had been informed that Amanda was spending the night at a friend’s home. He’d headed there, only to discover she wasn’t there either. The servant had given him an address where the young women had gone and now as the carriage drew to a stop in front of a bar, Jack shook his head in disbelief. He had no idea what Amanda Taylor would be doing here.

There was a crowd gathered, and he could hear shouts coming the bar. He hurried inside. The sight that greeted him left him stunned. Six axe-wielding women were smashing every table, glass and bottle of liquor in the saloon.

“Down with demon liquor!” one woman shouted.

“What the hell is going on?” the bartender bellowed.

“We are here to save souls!” the women of the temperance movement responded.

Jack pulled out the tintype Dan had given him of Amanda. If one of these battleaxes was Amanda Taylor, he had to get her out of there fast.

The bartender snatched up a bottle of whiskey from the counter when a raven-haired woman confronted him.

“Put that bottle down!” she ordered. “We’re here to destroy this blight upon our land!”

“You swing that axe and I’m sending for the law!”

She did and he did.

“You men! Get the constable!”

Several men bolted out the door to get help.

Jack recognized the woman as Amanda, and he knew he had to make his move now. The last thing he wanted to do was bail her out of jail. True, she was armed and might prove dangerous, but he’d dealt with worse than her before and survived.

“I’ll handle her.” Jack’s tone was so deadly and serious, the bartender stopped his advance.

Amanda lifted her axe again to shatter another bottle, and Jack made his move. He snared her around the waist and jerked her back against him, twisting the weapon out of her grip.

“Unhand me, you fiend!” Amanda cried out in alarm as she found herself pinned against a hard male body in an unyielding grip.

“Shut up!” he ground out, tossing her axe aside.

Amanda fought him with all her might, but his strength was overpowering.

Time was of the essence, so Jack gave up the effort to treat her like a lady. He picked her up and tossed her over his shoulder. She went still, and he smiled grimly as he disappeared out the door with her. He had to get her back to Texas to her father.

After working as a department manager for Famous-Barr, and briefly as a clerk at a bookstore,

Bobbi gave up on career security and began writing. She sold her first book to Zebra in 1982.

Since then, Bobbi has written over 40 books and 6 novellas. To date, there are more than five

million copies of her novels in print. She has been awarded the prestigious Romantic Times

Storyteller Award and two Career Achievement Awards. Her books have appeared on the New

The rights to Ms. Smith’s books have been sold to China, France, Germany, India, Israel,

By DawnsReadingNook at September 23, 2021

Love a hell bent woman! Jack is going to have some fun with Amanda!

Hi! I hope everybody enjoys The Lady and The Texan!