Discover the world of author Dianne Hartsock in her new book, Luka and don't forget to enter the give away at the end of the post for a chance to win a $20 Amazon/BN GC from the author. The tour is sponsored by Goddess Fish Promotions and you can find all the tour stops HERE.
Now let's chat with author Dianne Hartsock

I wrote my first story in first grade, a story of a giraffe we went to visit at the zoo. It was full of adventure and intrigue in just two painstakingly written pages. I’d always enjoyed being read to or have someone tell me stories, so being able to write one of my own was so satisfying, I’ve been writing ever since. The fact the teacher pinned my story to the board for others to read only added to my sense of accomplishment.
Do you have a favorite genre? Is it the same genre you prefer to write?
I read pretty much everything except non-fiction. I use books as my escape from reality. At the moment I'm obsessed with gay romance and mystery/crime drama stories, but tomorrow I might change to fantasy. That’s why I write in so many different genres. I enjoy them all. I write mostly m/m romances, with the subgenres of fantasy, paranormal, thriller, crime/drama, with paranormal being my favorite.
Do certain themes and ideas tend to capture your writer’s imagination and fascinate you?
I’ve always been intrigued with the power of the mind and psychic ability. Even though it’s not been proven, I enjoy writing stories about the paranormal, psychics, the power of healing with the mind. I’ve even written a ghost or two. Anything with a paranormal flavor with capture my attention.
How do you balance long-term thinking vs. being nimble in today's market?
I always plan to release several short stories between novels. They’re quick to write, easier to sell since they cost the reader less. If I can hook a reader on a short story of mine, they usually will buy the next novel, and maybe even ones off my backlist. Being flexible helps. I’m always trying new marketing techniques trying to reach as many readers as possible. Not everything works, so it’s a good idea to be diverse.
How do you find readers in today's market?
It’s been harder since the loss of Yahoo Groups and the fact Facebook has stricter rules all the time for authors. But I’m branching out to other social media venues, blog and newsletter, and once we’re able to gather socially again, I’ll go back to book signing events and Pride gatherings.
Do you come up with the hook first, or do you create characters first and then dig through until you find a hook?
I usually start with characters, daydreaming a story up around them for months or maybe years before I start to write their story. More often than not the hook comes to me out of the blue, the one thing that brings the story into focus. But this isn’t always the case. In my current WIP I’ve already started telling the story, but with confidence the hook will come to me when I need it. These are such delightful characters I’m thinking of them even when not writing. I just need the hook to be something extraordinary, as they are.
How do you create your characters?
Everything inspires me, from movies to song lyrics or a person I pass on the street. And it’s usually an emotion they spark in me. I begin to wonder who’d be feeling this? What would they look like? Who brings out this emotion in them? My characters begin to take shape, and before I know it, I start to dream up a story around them and we’re off! And I feel very blessed that once I start writing, supporting characters introduce themselves when I need them, usually with names and backgrounds they have no problem sharing with me.
What's on the top of your TBR pile right now?
The next book by C.S. Poe, Gregory Ashe, Jordan Castillo Price, K.J. Charles, Jordan L. Hawk. Between them they manage to keep me busy. I also read books recommended to me by friends who know my tastes.
Tell me a little about the characters in Luka.

Luka: He was born from the love of two magical beings when the ancient oaks in the grove were mere saplings. He appears a man in his prime, virile, skin dark as his beloved oaks, wise and powerful, wanting only to live in peace with his lover bartering his herbs.

Rhys: Rescued by Luka from imprisonment and torture at the hands of the sorcerer. Fair skin and hair, brave and beautiful, Luka’s lover. He aides Luka on his quest to bring hope back to the world.

Aethan: The dark sorcerer who wishes to take hope from the earth, keep it for himself, have the world and all it holds at his feet, doing his will for the treacherous promise, the faintest glimmer of hope in their lives.

Lorin: Rhys’s cousin and half-brother. The son and servant of Aethan, aiding him in his designs against Luka.

Ravan: Luka’s daughter and a powerful witch in her own right.
Where’s the story set? How much influence did the setting have on the atmosphere/characters/development of the story?
LUKA is set in the small villages and countryside of medieval times, when anyone with extraordinary abilities is labeled a witch or sorcerer and viewed with suspicion and fear. I was able to have Luka living in an isolated, cozy hut in the woods, bartering his herbs in the nearby village. There are close-nit towns where everyone knows each other and stand against outsiders. There are powerful lords who control the lives of the people in their vicinity. All this influences my characters’ behavior and the paths they choose to fulfill their goals.
If you had to write your memoir in five words, what would you write?
Family, friends, love are everything.
How often does your muse distract you from day to day minutiae?
Ha! I have a very rich internal life, my characters and their worlds never far from the surface of my thoughts. I’ve had coworkers come up to me and ask if everything’s okay, when I’ve only been trying to work out a problem a character is having with their significant other. The worse is when I have to do something and leave my characters in a perilous spot, unable to rescue them until my chores are done.
What do readers have to look forward to in the future from you?
My contemporary m/m erotic romance, Shelton in Love, should be out soon. I also have the second book in my The Karthagans series entitled, The Red Twins, will be out later this year. My current WIP, Jonathan Frost, is my own take on the Jack Frost legend, which I’m having a lot of fun writing. After that, I have several sequels I’d like to write, but everything in its time. 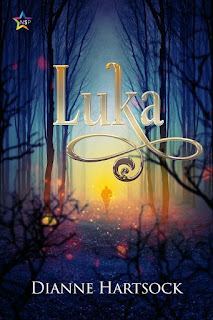 Luka makes a desperate wish and the earth shifts to his will. Regretting it immediately, he tries to undue the sorcery, but it is too late. He asked for hope, and to his horror, all the hope in the world is given into his keeping. He desires nothing more than to return this gift to the world.
Aethan wants to get his hands on the Well of Hope in Luka’s keeping. If he can ransom out hope to others at his whim, the world will be at his feet. Where it belongs.
With the aid of his lover, Rhys, Luka stays one step ahead of Aethan. But Rhys has his own enemy in Aethan, his estranged father.
Rescued by Luka, his sweet, gentle witch, Rhys now stands with him against Aethan. They have vowed to return the Well of Hope to the earth despite all odds, or die trying. For what is life worth, for anyone, without hope?

He missed his lover, though he’d been the one to send him away. Luka had wanted him to find a better life than he could offer, a solitary witch bartering his potions. And he had wanted Rhys safe from his enemies. But he may as well have cut out his own heart when Rhys had left.

Luka sipped his tea, enjoyed its comfort, then heat flushed his skin as he recalled his dream last night, the feel of Rhys in his bed. Rhys had been tender and passionate and welcoming. Luka had cried in his arms, overwhelmed with the joy of it. Had wept again on waking to find himself alone on the hearth, Rhys across the room, reading a book in the morning light spilling through a window, as far away as the years that had separated them.

A bird fluttered past, calling his attention, and Luka’s spirit flew with it, soaring into the sky. The rush of air exhilarated him, and he dropped with a smile back into his body. After hastily setting aside his tea, he pulled a crystal from a pocket and held it up to the faint winter sunlight. He marveled at the earth reflected in glass. Focusing his gaze, his essence slipped easily into the encapsulated world and flew along the pathways, flitting between trees and brush. He scampered with a family of squirrels along a branch, leaping with wild glee from limb to limb.

Dianne Hartsock will be awarding a $20 Amazon or Barnes and Noble GC to a randomly drawn winner via rafflecopter during the tour.

About the Author and Where to find them:

Dianne is the author of m/m romance, paranormal suspense, fantasy adventure, the occasional thriller, and anything else that comes to mind. She lives in the beautiful Willamette Valley of Oregon with her incredibly patient husband, who puts up with the endless hours she spends hunched over the keyboard letting her characters play. She says Oregon’s raindrops are the perfect setting in which to write. There’s something about being cooped up in the house with a fire crackling on the hearth and a cup of hot coffee warming her hands, which kindles her imagination.

Thank you for following my tour, Sue G!

Thank you so much for hosting me today, Dawn!