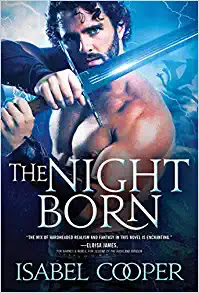 Sentinels spend their lives fighting the monsters that prey upon humanity.

As the Traitor God’s army grows and war looms ever-closer, Sentinel Branwyn arrives in the gleaming city-state of Heliodar to ask its High Council for aid. Its youngest member, Zelen Varengir, is sympathetic to her cause, but his hands are tied by his powerful family—and when they demand he spy upon the beautiful warrior, there is little he can do but obey.

But something stronger than blood draws Zelen and Branwyn together, and when Branwyn is framed for the murder of the High Lord himself, the unlikely duo must learn to trust each other if they want to discover the deep secrets hidden in the heart of the city, uncover the real enemies moving against them, and embrace the attraction neither can deny...all while facing down the return of the greatest threat the world has ever known.

Fans of The Witcher and Ilona Andrews will love this epic tale of adventure and romance.

“Lord Rognozi and his wife are dead.”

The words made no sense for a second. Then they took Zelen’s breath away as thoroughly as any of his mother’s lectures or the beatings his father had ordered. Gedo wasn’t putting in nearly as much effort as had gone into the other incidents: he was either very talented or very fortunate.

It would have been unsurprising for Lord Rognozi to have perished quite naturally and uneventfully, and dimly possible that his wife might not have survived the shock and sorrow of it, though it would’ve run counter to what Zelen knew of the lady. That wouldn’t have brought Gedomir to his bedroom.

“Murdered. Butchered, in fact, late last night. If you want the more sordid details, I’m afraid I didn’t ask for an anatomical report. I’m given to understand that the servant who found them is in a state of shock.” He smoothed an imaginary strand of impeccable hair back from his brow. “And your…envoy…has vanished. As has her very large, very likely magical sword.”

Zelen lunged forward, with no notion of what the motion might achieve. Denial simply demanded action.

As he’d so frequently done in their past, Gedomir smiled with lofty derision, not to mention a share of pity. “She has, I’m afraid. You’re welcome to try and convince me that a burglar broke into one of the best-warded noble houses in the city and did nothing but slaughter the inhabitants, or that a servant with years of service suddenly went unstoppably berserk in a manner that didn’t rouse the attention of the others in their quarters.”

Colors faded from the world. Zelen sat silently and Gedomir fell silent as well as Idriel stepped in, carrying a tray of tea and cakes. He put it down in front of Zelen and glanced between him and Gedomir: Shall I pretend you have another engagement?

Zelen shook his head. Even that motion took an almost unsupportable amount of strength. “Thank you, Idriel, that will be all,” he said by rote.

“It may not be entirely her fault, granted,” Gedomir said. “I can perceive no motive for the action, regardless of what others may think, given what you’ve told me of her nature. The Criwath court, or even subversive agents there that Olwin knows nothing of, may have placed a spell on her for this purpose. Or her experiences in the war may have caused damage that hid until now.”

“I’m certain that you’re certain. And Father and I are prepared to take that into account,” Gedomir said, spreading his hands. The ring with Verengir’s crest, his only ornament, gleamed in the pale light of the autumn morning. “Honestly, the information she can provide is more valuable than any vengeance would be—the Dark Lady can wait on her claim. Father thinks the rest of the council might even see a case for clemency, if the circumstances are right.”

“Would I speak falsely?” Gedomir’s lips tightened, but then he relaxed. “I understand that you’re…biased, but for once your proclivities may have been useful. There’s clearly more here than simple murder. Father and I are prepared to investigate it and to argue as much in the face of all opposition—once you retrieve the woman, of course.”

There was rock under her cheek and blood in her mouth. Her arms were sticky—probably more blood—and a net of pain wrapped her whole body, fiercest around her right knee and her left eye. Branwyn was fairly sure her nose was broken too.

All of that was comparatively minor. She’d been injured more severely in the past, though not often, and the healing of a Sentinel was already doing its work, pulling bones and muscles back into place. Even the knee, which would likely have crippled a normal person for life, would give her only a few days of trouble. Branwyn knew as much, and none of her wounds troubled her.

She had no room in her mind to worry about them anyhow. As consciousness returned, she searched her memory for the fight that must have taken place and found only blankness, then paralyzing fear.

After the ball, she’d felt uneasy about the Rognozis’ house. She’d gone to get Yathana. From that moment, she remembered nothing concrete: she had a dim recollection of the world spinning, of a sword in her grip and the smell of blood and death, but that was all.

Now she was—her eyes focused, one considerably slower than the other—in an alley, in the early morning, wearing the blood-soaked remains of her ball gown.

Her memory had an enormous hole.

There was blood on her arms, up to the elbows, and she couldn’t feel any cuts there.

What happened? was her third question.

The first was What did I do?

During the day, ISABEL COOPER maintains her guise as a mild-mannered project manager in legal publishing. In her spare time, she enjoys video games, ballroom dancing, various geeky hobbies, and figuring out what wine goes best with leftover egg rolls. Cooper lives with two thriving houseplants in Boston, Massachusetts.