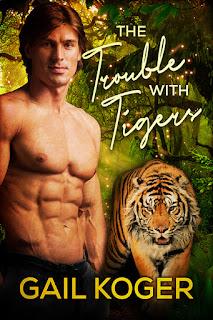 Lions and tigers and skunks, oh my! Kandi Cain’s a psychic pet detective. Her cases range from wrangling baby goats, to finding lost critters. Her current case is rescuing a lion from a Nigerian warlord. Kandi knew dressing up as a demonic clown and walking a lion down a city street would freak people out. But, wow! She didn’t expect Armageddon.

The hot as hell Detective Dutch Callaghan’s on her trail again and showing more than a professional interest.  Kandi’s talents have attracted the attention of a CIA black ops agent who wants her to steal twelve endangered white tigers from a Pakistani warlord. The mission’s crucial to prevent a terrorist attack.

Wait! What? Terrorists? What had she gotten herself into? Kandi wasn’t a superhero. She couldn’t bend steel with her bare hands, and she wasn’t faster than a speeding bullet.  She’s Doctor Doolittle. She talks to the animals and occasionally the dead.

Excerpt:
“I am so sorry. I’ll pay to get the typewriter repaired,” Stephanie said.

Dutch examined the hole in the Remington. “Relax, it’s not the first time a gun has gone off in Kandi’s office. Right, sweetums?”

Sweetums? Seriously? I frowned at him. I didn’t like the snarky way he pronounced sweetums or the feral glint in his eyes. “You need to leave honey bunny, I’m with a client.”

Dutch totally ignored me and reached for the pistol. “You got a concealed carry permit ma’am?”

I smacked his hand. “Don’t touch it! I haven’t done my reading yet.”

“As you command, sweet cheeks.” Dutch plopped down in the other chair.

I shot him a baleful glare. “Ever heard of client confidentiality, snookums.”

Stephanie gushed, “Has anyone told you, you’re the spitting image of that actor who plays Thor in the movies?”

“Thank you, darlin’ and may I call you Marilyn?” Dutch oozed charm.

Stephanie giggled. “You can call me anything you want but my name is Stephanie Boyd.”

“It’s a pleasure to meet you Stephanie.”

Times like this, I wished mind control was one of my gifts.

Tinkerbell, the little traitor, jumped on Dutch’s lap and smiled happily as he stroked her ears.

Dutch was deliberately trying to rattle me, and it wasn’t going to work. My dad had taught me how to handle police interrogations, but I didn’t have time for his games. I needed to focus on helping my client.

Taking a calming breath, I held my hand over the gun and summoned my psychic mojo. A flurry of images flowed across my mind. It was kinda like watching a choppy movie. I grimaced. A sometimes-pornographic movie. Using the Desert Eagle as a sex toy was a new one for me, along with the unusual sexual positions. I broke the connection with a shudder. Ugh. “Do you know a petite redhead with a ginormous snake tattoo?”

“Trixie! She’s the reason I divorced the ass.”

What a surprise. “Trixie and your ex-husband used this pistol to rob your box office.”

“Dammit!” Stephanie dropped her head into her hands. “I should have known.”

His gaze fixed on my face, Dutch queried, “Were the suspects wearing a demonic clown disguise?”

I smiled at Dutch. “Well, sugar lips, there were clowns involved. Right, Stephanie?”

“Yes.” Stephanie raised her head. “But the robbers were dressed as regular clowns not the horror movie kind. They appeared out of nowhere. We all thought it was a joke until the armored car guard got shot. Then the bastards took the money, dropped a smoke bomb and got away in the confusion. That poor guard almost died.”

Anger flashed in Dutch’s eyes. “Where did this robbery occur?”

“Dallas. The police were unable to find them or my money,” Stephanie stated grimly.

Dutch arched an inquiring eyebrow. “Kandi, my love, are you done with all your woo-woo stuff?”

Howdy. My name is Gail Koger and once upon a time I was a 9-1-1 dispatcher. Too many years of wild requests, screwy questions, bizarre behavior and outrageous demands have left me with a permanent twitch and an uncontrollable craving for chocolate. I took up writing science fiction romance to keep from killing people. So far, it has worked.

By DawnsReadingNook at November 06, 2019

“Let me get this straight. You want me to dress up like a clown and help you steal a lion from Kuti, a Nigerian warlord?”