Every Rimalian child learns the same story…
Once there was a planet named Rimalia, orbiting a star the Ancient Predecessors called Sennrozenmi, The Guardian of the World.  The Ancients were very old, incredibly technologically advanced, and for far too long of their existence, incredibly stupid.  And they grew wise too late.
Most of their history was consumed by war in every form, from huge armies clashing, progressing to quieter, but no less bloody forms, like technological and corporate competition taken to extremes, without regard for the effect of their people, or the planet.  Greed on all levels was the driving force of their society, untempered by compassion, or generosity.   The Ancients were not evil, but they did not yet know how to prevent evil from leading their actions.
But the lush, fertile Land of Rimalia could not continue to support the Ancients, when they did not but consume and poison, and eventually the Land was forced to make a choice: let the Ancients die, or let Itself die.  The Land chose to save Itself and allow the Ancients to die; to let their children die, and ensure there would be no grandchildren. The Land would give rise to another species, that hopefully would have more care for the Land, and understand that while the Land could live without them, they could not live without the Land.
The Ancients however, were learning to be more generous, learning that they had to take care of each other, and had come to see with grief and shame the destruction they had wrought on themselves and the Land, but the Land would not respond to their efforts to repair the damage for many years.  Then the Ancients found the new species the Land had chosen to nurture, and made a decision:  They would help the Land, and this new species by ensuring they would never commit the sins of the Ancients, that they would never abandon the Land, forcing the Land to abandon them.  Gradually, the Land accepted their overtures, seeing their efforts to atone, to nurture the new species, offering small comforts to the Ancients as they continued to decline.
Over the next centuries, the Ancients implemented their Atonement: they continued to repair as much damage as they could, and they carefully helped to nurture this Second Sentience.  They guarded them, and as they matured as a species, they began to teach them the Lessons the Ancients had taken too long to learn:
Do not abandon the Land, or the Land will let you die, will let your children die, and there will be no grandchildren.
Never make war upon your neighbor, but do not allow your neighbor to make war upon you.
Greed is an evil that destroys all you work for.  Do not allow greed to take hold in anything you do.
Everyone has the right to food, clothing, shelter, and to be cared for when sick or hurt. Ensure these things without recompense, and your people will remain more peaceful, and have no temptation toward greed.
The Land is generous with those who are generous with each other: help each other when the Land undergoes the changes of time.  A long feast will follow every famine and these are natural to the Land’s regeneration.  Help each other and the Land will remember.
There must always be balance in life, as there is balance in the Land.  Do not require work all hours of the day, enjoy time to create, to admire, to rest.  As the Land must sometimes lie fallow, so must you.  Life with nothing but work is short, unhealthy, unhappy, prone to seek strife, and sterile.  Ensure balance between the needs of life and the wants of life.


These are the first, most important lessons of each Rimalian’s life.

Regent Killian Larrestes survived a harrowing attack and the betrayal of his family by his mother, and has since worked to help them all recover, learning the complexities of protecting and commanding a large, sprawling Clan.

Shiloh Zahirris is seeking Sanctuary from a marriage he doesn't want when he ends up under the protection of Killian Larrestes. Killian takes him in, and they find themselves falling in love. But will social objections, personal insecurities, and someone seeking revenge destroy their chance at happiness?

His mother, Janet Larrestes, stood up behind her desk, with a surprised look on her face, when he and his father came in. “Killian, what happened? Were you attacked?”

He nodded grimly. “Yes, Senki, I have been, but I fought back well enough to escape Anan.”
“Anan?” Janet’s expression was puzzled. She shook her head. “I don’t understand. Are you saying Anan attacked you?”

Killian nodded as his father put a comforting hand on his shoulder. “Yes, Senki, Anan attacked me. She attempted to rape me, Senki.”

“Surely there must be some mistake, Killian. Anan is your fiancée. This marriage has been arranged for a year now. I thought the two of you liked each other.” Janet sat down again, not even bothering to ask how bad his injuries were.

Killian nodded again. “I thought so, too, Senki. I mean, I liked her. She has always acted properly, even if I haven’t always liked the way she treats me. But this is different. This isn’t a misunderstanding of two people needing to learn how to deal with each other. She tried to rape me. I had to walk home from the park in the square because I wasn’t getting back into that car. Who knows what she would have done then? I had to slash her face with my dagger to get her off of me long enough to get away.” His knee really hurt, but his mother had not given him leave to sit. His father had taken the first aid kit out and had busily began to clean Killian’s face, and carefully removed Killian’s shirt to look at his shoulder.

“Janet, this wound on his shoulder needs stitching,” David Larrestes told his wife softly, as he gently checked the wound. Killian hissed and barely managed not to say every cuss word he knew.

“That can wait until we settle this.” She picked up the phone. “I’m calling Anan here. We’re going to sort this out.”

“Can I at least take the boy to get him cleaned up and dressed properly?” David asked, silently warning his son to be silent. Killian obeyed, giving his mother a respectful look. She was a good woman, but a bit of a martinet.

Janet held her hand up for silence. She spoke briefly on the phone, ordering Anan and her mother to come to the house to sort out this obvious misunderstanding. A cold chill went through Killian as he listened to those words. Surely, his mother believed him, didn’t she?

Janet hung the phone up and looked at her husband and son. “Anan is getting her face stitched up. Apparently, you’ve done some damage to your fiancée.” She spoke sourly.

“Good, maybe she’ll learn that no means no,” Killian said. “There’s no misunderstanding, Senki. On my honor, I promise you. She attempted to rape me. I ran as soon as I was able to get away, and the only way I could make her let me go was to use my dagger.” 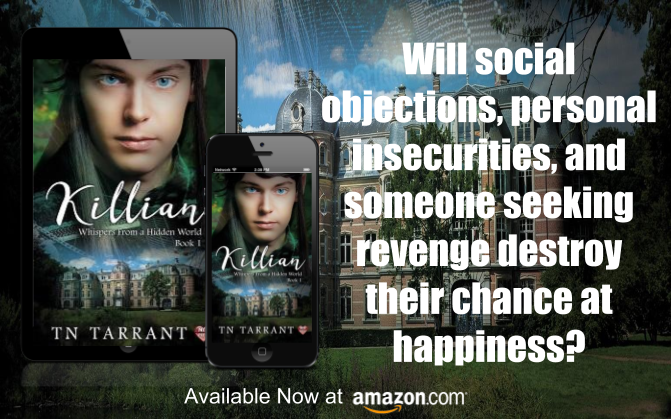 TN Tarrant is a hard-working single mom living in the wilds of Wyoming, who enjoys embarrassing her child with bright red lipstick prints to the forehead. When she isn't embarrassing her child, or hunting, killing and dragging groceries home through the snow, she loves to write romantic stories with hot lovers. She suffers from a love of extremely bad jokes and has a tendency to inflict them on innocent bystanders. She has recently been accused of developing an unhealthy yarn addiction, merely because she has bought enough of the stuff to start her own store. She notes that this does not keep her child and others from enjoying the products of that yarn addiction in the form of scarves and blankets. Other issues facing this poor soul are the continuing threats of books and nail polish overtaking the entire household and burying her amongst themselves. We won’t get into her child’s rocks…

By DawnsReadingNook at December 01, 2018