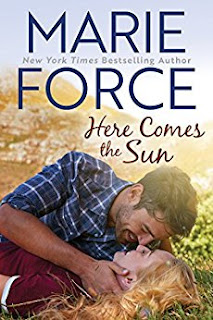 Welcome back to Butler, Vermont and the Abbott family.

My Rating for Here Comes the Sun: 3 Stars

Wade Abbott knows who he wants to spend his life with and that is Mia Simpson. But fate plays a cruel joke as she isn’t free to be anything more than friends. Wade knows his feelings for her are strong but not logical since he thinks she is in an abusive marriage. All it took was one look, one touch from her and he was lost two years before, falling in love with a woman he couldn’t have.

Until she turns up half frozen on his doorstep two years later and all he can do is breathe a sigh of relief she feels as he does but Mia has secrets and those secrets can hurt Wade in many ways. Can these two make a go as a couple even as danger looms behind Mia, a sudden marriage proposal and wedding and the big question is- will Wade’s family ever accept Mia as Wade’s heart-mate even with the suddenness of her arrival into their son’s life?

I normally devour this author’s books, especially this series since this is the first one I found of this author’s that had me laughing up a storm while reading and falling in love with a family that is as normal as you and me. But HERE COMES THE SUN fell flat to me and this was why. I could not at all fall in love with Mia as a main character as I did for the other women in the series. She annoyed me to no end and I just could not see how someone who was supposed to be abused act like that in any way.

What I didn’t really like was I think how Mia reacted, when she dropped into Wade’s bed even after being beaten by her ex, skittish at one point then falling all over Wade like he was going to leave her. As a person who has dealt with a physical abusive relationship, this had me not as keen as others were on Wade’s heroine, Mia. I found her to be not as authentic as I would have preferred a character would be dealing with the aftereffects of two years of abuse and more. To me, Mia was just not that enjoyable and I may get flack for saying that, but she just grated on my nerves. I love Wade Abbott and the whole Abbott family. I was eager to see where the author would go for Wade’s story and I just couldn’t get into this one as much as I did the other books in this series as well as in the Green Mountain Series. For me, Mia was fake and just going through the motions of being an abused woman and checking off boxes of what they are like. Check-bruises and emotional beat down. Check-Fearful and self loathing. Check-Jump at every noise. It all felt off to me within the story. As much as I love the scenes with the Abbott's and all my favorite characters, I was not as enthused about this one as I normally would have been.

HERE COMES THE SUN is a nice story but I didn’t love it as much as I did in the past. Maybe it was because I am sensitive on how a good domestic abuse story line should be used in a story or the fact I was once a statistic for being in an abusive relationship. Whatever the case, HERE COMES THE SUN is well written, great cast of familiar characters and a tease of a future books has me wondering if the twins will find their own happy ever after plus we got to see Fred, the Moose who I simply adore.

Ms. Force delivers a nice story that you may or may not enjoy depending on your trigger issues but its overall a good book, just not that great in my opinion as past works in the series have been.

By DawnsReadingNook at February 14, 2018