Book Spotlight and Giveaway~ One Night in Havana

Welcome author Kathleen Rowland today as we discover their latest book, One Night in Havana. Don't forget to enter the giveaway at the end of the post for a chance to win a $30 Amazon/BN Gift Card from the author. The book tour is sponsored by Goddess Fish Promotions and you can find all the stops HERE, 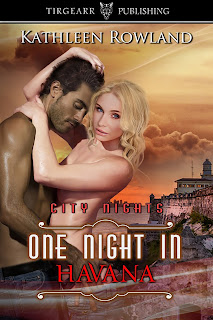 A desperate competition and sizzling attraction leads to dangerous desire.

New York Marine biologist Veronica “Roni” Keane is attending the Havana Bay Conference in Cuba. Tomorrow only one grant will be awarded which will provide the winner with professional recognition, resources for a project, and living expenses for two years. She hopes to continue her deceased father’s work, but smooth operator, Carlos Montoya, has won many grants in the past.

Carlos, a freelancer for the Havana Port Authority, works to help protect Havana’s reputation as a bastion of safety. As international travelers flock to the island, attracted by its 1950’s time-warp and colonial architecture, the drug business is running rampant, particularly on Roni’s cruise ship. Something’s not right, and when her scuba tanks are tampered with, Carlos brings in the military police to investigate. For her safety, he keeps her close, but he craves her body.

Their attraction leads to a fun night with a bit of kink. But Roni finds herself in more trouble than she bargained for when the criminals blame her for alerting the military police and come looking for her. Can Roni trust Carlos to protect her? Will she stay in Havana if Carlos wins the coveted grant, or kiss her lover goodbye?

Veronica was a looker without the jaded appearance of the many women he'd seen wandering from her cruise ship. Most of the time she dressed in business attire, but her curves smoldered underneath. Her high heels fit with Cuban fashion. The moonlight highlighted her shoulder-length blonde hair. While scuba diving, he'd forced himself to look away from her long, bare legs for fear he'd run his hands up them and tuck his fingers beneath her thighs. At the restaurant, he’d enjoyed a little banter, but tonight he'd gotten another glimpse of her toned body as she crept across the deck. The short dress plastered against her and she hitched it up to move around. The light sway of her hips brought him to his knees. He shuffled around the cabin, his dick pressing against his zipper. Cruise vessels were being monitored by Border Protection, and he'd make sure no harm came to her. He glanced across the water and reminded himself to be useful.

It'd been the same since he and his buddy, Alberto, from the military police put two and two together. They'd sat on a rooftop deck of a bar overlooking the harbor, watching local criminals getting on and off her ship, the Ecstasy.

"That operation needs extra eyes," Alberto had said with a swig of beer.

Alberto had glared at him. "Crims are dealing from the cruise ships. Your boat has—"

"A perfect location?" The next day, with military cameras and other equipment installed, Carlos started his surveillance job. Same drugs, different participants and ways of operation. Stuck on his cabin cruiser with no company was tough on the libido. Before leaving in the early hours of the morning, he connected his recording device to a landline provided by the port authority. At his house, he filed reports, uploaded photographs to support his narrative, showered, and then changed into his usual garb.

Most days he taught students studying abroad in English at the University of Havana. Cuban students interacted with American, South American, and European exchange students. Socializing made them seek a better life. New hopes and dreams threatened to divide their insular Cuban community. Now, during winter break, he attended the Oceanography Conference.

Every session had been a snore until he'd learned Veronica was pitted against him for the same grant. Stiff competition brightened the experience. The daughter of the late Cephalopodiatrist, Ronald Keane, didn't churn out an article a month for ten plus years without honing in on the power of eight. Octopuses changed shape and color at will, squirted ink, vanished through tiny cracks, and even tasted with their suckers. The predators reminded him of himself, but everything about Veronica put her in the guileless category.

Did she not know he'd invited her to scuba dive with a handful of judges to even out the playing field? He'd won a handful of grants. Networking was about making connections and building mutually beneficial relationships. Instead of joining the crew afterward for drinks, she'd assisted his eighty-year-old abuela off the boat and down The Malecón seawall. That day a cold front blew in, and massive waves crashed  against her chances to expand her sphere of influence. Too bad Bela had lit on her like a sticky butterfly. His heart skipped with Veronica in the midst of a beat.

He was aware of the routine when anyone researched and wrote scholarly articles. She had to plan. Make predictions. Envision. Check data, and then double-check. On paper everything was perfect. But in reality, when competing for a grant, something went wrong. She didn’t sell herself. Perhaps he'd frostily point that out, later, somehow, and help her future efforts.

Movement on the deck outside his cabin brought him back to the present. Veronica stood and turned toward the dock, and he followed her silently to the front of the boat.

A guard in a light blue uniform stormed down the dock. Will she jump toward him? 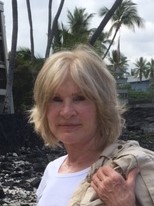 About the Author and Where to find them:

Kathleen used to write computer programs but now writes novels. She grew up in Iowa where she caught lightning bugs, ran barefoot, and raced her sailboat on Lake Okoboji.  Now she wears flip-flops and sails with her husband, Gerry, on Newport Harbor but wishes there were lightning bugs in California.

Kathleen exists happily with her witty CPA husband, Gerry, in their 70’s poolside retreat in Southern California where she adores time spent with visiting grandchildren, dogs, one bunny, and noisy neighbors.  While proud of their five children who’ve flown the coop, she appreciates the luxury of time to write.  If you’d enjoy news,  sign up for Kathleen’s newsletter at http://www.kathleenrowland.com/


a Rafflecopter giveaway
By DawnsReadingNook at January 30, 2018

Congrats on the tour and thank you for the excerpt and giveaway.

Dawn, thank you so much for hosting One Night in Havana. I appreciated your comment, James Robert.

I enjoyed getting to know your book; Congrats on the tour and thanks for the chance to win :)

Are there any books that you like to reread regularly? Thanks for the giveaway. I hope that I win. Bernie Wallace BWallace1980(at)hotmail(d0t)com

Thanks so much for the opportunity to win.