Readers and Writers for Chechnya #chechenrainbow 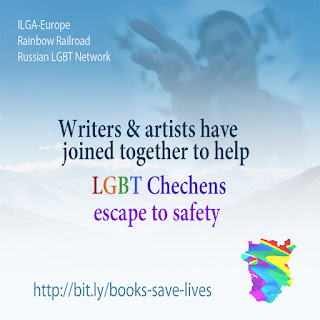 Readers & Writers for LGBT Chechens is raising money for organizations working directly with gay men and other persecuted LGB T people from Chechnya and the northern Caucasus. We do this through direct donations, donating royalties to these charitable organizations, and an online auction that runs through Saturday, May 13, at 12 noon Central Daylight Time (US).
Historical fantasy author EM Prazeman, who has donated an original story based on the prompt of the highest bidder’s choice to the auction, talks about why she decided to get involved. 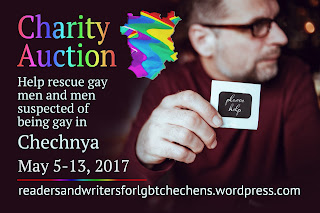 Chechnya seems far away, and unimportant. Isn’t that always the way it seems? The world is such a big place, and there are so many people in it. There’s so much suffering. What can one person do about all that? It turns out that one person can do a lot for good, or ill.

“As long as Putin backs me up, I can do everything, Allahu Akbar!”
- Ramzan Kadyrov, Chechen dictator*

I grew up in an era when a lot of the charities that people heard about or saw on television commercials were pretty lousy at delivering the help they promised. Feed the Children, one of the most famous charitable organizations in the US, went through scandal after scandal, and is in the midst of yet another lawsuit. At first we didn’t hear about it, but as the information emerged at a slow and uneven pace, it called the idea of giving at all into question. We learned to give directly, to give locally, and to volunteer.

But everything has changed now. Now I can give globally, directly. I didn’t have to guess about an organization’s track record. I could find out. When I saw what the Russian LGBT Network was doing, I had to help.

It’s probably hard to understand how helpless and frustrated I’d felt, and how free I feel now. I can create a graphic design and ship it to dozens of people scattered all over the globe, who can then share those designs, alter them, improve them, make them work so that people become aware of causes that they care about. I can send five dollars to Somalia in an instant. I can exchange emails with the head of a charity in Germany. The fact that I’d learned about what’s happening in Chechnya at all is amazing even as it chills me.

Now I can read about men at risk in Chechnya and do something tangible about it today instead of just being angry and sad about it.

After 11 days, he was released to a male relative, who was told that Maksim was gay. The security officers told the captives’ male relatives that, if they had any honor, they would kill the young men...**

I can’t give to every cause, or spend all day, every day volunteering. But I don’t have to. I can reach out to other people, and we can all help a little. A friend of mine likes to say, many hands make light work.

Thirty years ago I might have read about the graves, the tragedy, the shadowed after-effects of what had happened months or years after the fact, if at all. But it’s the year 2017 and a network is up and running to get people who are still alive and in danger right now out of Chechnya. They’re in the news, and they’re getting people at risk out of Chechnya right now. In a year or two, I fear it might be over one way or another but this is happening fast enough, fiercely enough that I think that we can save a lot of people. Real people. We can do this. Visit Readers & Writers for LGBT Chechens or https://readersandwritersforlgbtchechens.wordpress.com/ for more information.

Ways to Get Involved

·         To learn more about the situation in Chechnya — including news updates and how to make a direct donation to a designated charity — visit Readers & Writers for LGBT Chechens
·         Buy books with royalties going to help vulnerable Chechens
·         Bid in the Readers & Writers for LGBT Chechens online charity auction
·         Sign up to attend our Facebook event and invite friends. It’s a great way to keep up-to-date.

If you're an author or artist who would like help out, please sign up at Authors & Publishers for LGBT Chechens. There, you can also find answers to frequently asked questions about royalty donations, the charitable organizations that are helping LGBT Chechens, and more.
_____

EM Prazeman (Twitter: @emprazeman) lives in the Pacific Northwest on small acreage, where she tends to goats, chickens, and both ornamental and produce gardens. This sounds more picturesque than the reality, though the view on the property is splendid. She is a Top Writer at Quora.com, and has published to-date five novels and two short stories with four more coming out in 2017. Prazeman’s writing is influenced by Alexandre Dumas, JRR Tolkien,  Sun Tzu, Niccoló Machiavelli, Hossam Ramzy, Akira Kurosawa, Frank Herbert, Leonardo DaVinci, Ursula LeGuin, Baldassare Castiglione, Hayao Miyazaki,  and many other writers, visual artists and musicians.

“For me, writing, visual art and music are all mixed up. They’re the same activity. They’re just expressed in different mediums.” – EMP