Discover the world of Marie Johnson in their new book, Bishop. Don't forget to enter the giveaway at the end of the post for a chance to win from the author an amazon or barnes and Noble gift card. The book blitz tour is sponsored by Goddess Fish Promotions. 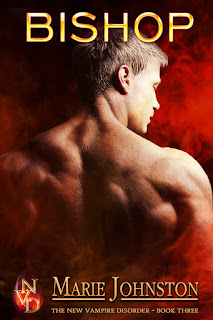 Fyra  is on the run. Permanently. Pursued by fellow underworld demons—and one very angry vampire, she’s running out of options. After failing her last mission of forcing vampire, Bishop, to give the demon world the information they want, Fyra knows she’s as good as dead. Too bad she’s no good at hiding. Everywhere she goes, fires break out. Her combustible personality is more than annoying—it’s going to get her killed. Tracked by the random fires reported on the news, her enemies can easily find her—unless Bishop can find her first.

Bishop Laurent has to free himself of the bond Fyra tricked him into…and do it without exposing his own icy secrets to anyone, especially his team. But after he captures her, he sees past her fiery demeanor. Her knowledge of the underworld would be a huge asset, a perfect reason to keep their bond intact. Only Fyra overhears them and refusing to be a pawn, goes on the run again. Bishop has to find her first, and this time, he must admit his real feelings for her…at least to himself. Can he find her in time to save her life and make their bond last forever? Or will they be killed fighting Hell with fire and ice?

Sirens wailed, disrupting the silence of the night. Ahead of Bishop, an orange glow carried through the moonless night. Must be a fire, a mile, maybe two, away.

Bishop almost dismissed it until he remembered the seared plastic tape at the house.

His demon was hot.

Pressing on the accelerator, he aimed for the blaze. Firetrucks zoomed in front of him, racing to the scene.

Bishop stopped a block away, blending in with other late night rubberneckers. Smoke rolled from a building. A gas station. And not a building, but a car parked at the pumps was engulfed in flames. Did she really have to pick the most dangerous place for open flame? If it was her. But his old friend, intuition, curled through his gut like a tendril of smoke.

Yes. It was her. He’d catch her and finish her. Cover his mistake before she threatened his team. The dependable, calm Bishop had royally messed up. He’d make it right. His friends had been through a lot and Bishop would mop up his own mess and keep them protected, while protecting himself. He’d do it to honor his mam.

Firemen hopped out, but Bishop remained in his vehicle. Hoses were unraveled and they battled the fire as people fled the premises but stayed within watching proximity.

Bishop scanned the crowd. His demon should be in her own form. Could she possess another human without the help of the humans who would summon someone like her? It was possible, but his pull to her was stronger, likely not from being muted in a host. He had no clue what she looked like, but he studied the crowd closely.

His bond didn’t ping, didn’t tighten his gut sensing her proximity. She wasn’t among the spectators.

You can’t hide from me, demon. 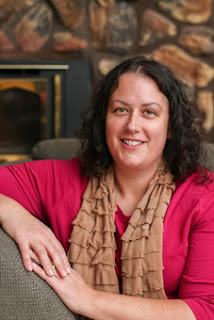 Marie Johnston lives in the upper-Midwest with her husband, four kids, an old cat, and a young dog. After trading in her lab coat for a laptop, she’s writing down all the tales she’s been making up in her head for years. An avid reader of paranormal romance, these are the stories hanging out and waiting to be told, between the demands of work, home, and the endless chauffeuring that comes with children.


a Rafflecopter giveaway
By DawnsReadingNook at May 09, 2017

Thanks for sharing and for the great giveaway :)

What is the best book that you read in 2016? Thanks for the giveaway. I hope that I win. Bernie W BWallace1980(at)hotmail(d0t)com

The best book I read last year was The Player by Kresley Cole. She's one of my favorite authors.

Congrats on the tour.thanks for the chance.