Thanks for stopping by to talk a little about your writing! Let's jump right in. When did you begin writing and why? I began writing about three years ago when a friend dared me to write.
I was resistant at first, I’d been reviewing for years and had a reputation of keeping a tight leash on authors. J I was afraid I’d be caught in my own writing cave.
But my friend was persistent and so I agreed to enter a contest. I thought if I was told that I sucked that I would give it up. But the response was very complimentary, I didn’t get a spot in the anthology of the winners, but the editors said to not stop and to enter again next time.
So, I’ve been writing ever since.

Do you have a favorite genre? Is it the same genre you prefer to write? Erotica, the hotter the better, especially ménages  Yep, I write it too.

Do certain themes and ideas tend to capture your writer’s imagination and fascinate you? Yeah, I get ideas from movies, television shows, talking to people. News events.

How do you balance long-term thinking vs. being nimble in today's market? I’m still learning, I don’t think you ever stop learning. Things change all the time.

How do you find readers in today's market? Social media, but I’m trying to go beyond because not everybody (shocking) is on facebook, or twitter, or any other platform.

Do you come up with the hook first, or do you create characters first and then dig through until you find a hook? The plots usually come to me in the middle of the night, around 3am. I’ll get a scene pop in my head and it will bug me all day until I finally find out what the book is going to be.

How do you create your characters? They talk to me and I listen. J

What's on the top of your TBR pile right now? Dark Thoughts by Cynthia Sax

Tell me a little about the characters in The Resurrection of Artemis.  The Resurrection of Artemis is a sexy version of Batman. ;) In it, Amy Wilson was once known as Artemis a cyber Robin Hood, she was given probation in exchange for helping the Feds to put safeguards in place to detract people like Amy.
Her probation is almost over, but three people want her out of retirement.
Quail City’s sexy crime fighting duo Dark Master aka billionaire Noah Adams and Calypso, Noah’s assistant Vanessa London.  They know she isn’t behind what is happening in Quail City but look at it as a chance to finally get Amy where they want her, both in bed and fighting crime with them.
Hinderer is trying to hold technology hostage but he needs Amy to help him complete his evil plans.
This is a FFM ménage.

Where’s the story set? How much influence did the setting have on the atmosphere/characters/development of the story? It takes place in the fictional city of Quail City. I live in Oklahoma City and everything here seems to be named after quails.
I’ve always loved the Batman series, because he used his brain to fight crime. He didn’t have any super powers.

If you had to write your memoir in five words, what would you write?
Should Have Listened to Mom.

How often does your muse distract you from day to day minutiae? My muse is rude. Likes to strike when I’m sleeping, or if I’m working and can’t write something down because I’m talking to customers all day.

What do readers have to look forward to in the future from you? I’m currently working on the next book in my Scandalous Fairy Tales series based on Beauty and the Beast.
I’m also playing with a plot idea for a new installment of Artemis, it really hinges on what readers think of the first one.  If they’d like to see more, email me at izzyszyn@gmail.com or find me on facebook. 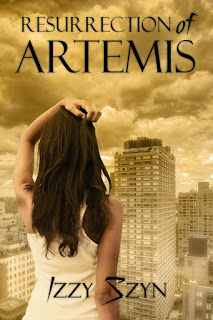 Resurrection of Artemis
by Izzy Szyn
Izzy will be awarding a $10 Amazon to one randomly drawn winner via rafflecopter during the tour. Please use the RaffleCopter below to enter. Remember you may increase your chances of winning by visiting the other tour stops. You may find those locations here.

~*~*~*~*~*~
BLURB:
Once known as the infamous hacker Artemis, Amy Wilson now works in a coffee shop. With only months until the end of her probation from working in the technological industry that she loves, Amy is determined to keep Artemis dead and buried.
When incidents similar to the ones Amy did start occurring all fingers start pointing in Artemis’ direction, and three people that want Artemis to come out of retirement.
Quail City’s super heroes Dark Master and Calypso aka as multi-billionaire Noah Adams and his assistant Vanessa London know Amy’s secret, and also know that she is being set up. Having spent months in a flirtmance with Amy, they are tired of waiting and want both her and Artemis in their bed.
Hinderer wants to hold technology hostage, but in order to do that he needs Artemis’ assistance, and he will use any methods necessary to gain her cooperation.

Excerpt:
“People have been mentioning Artemis,” Calypso said. “You wouldn’t have heard anything?”
They knew, Amy thought. Somehow they knew. “No, Artemis isn’t here anymore. At least from what I heard.”
“Damn shame, too,” complained one of the customers in the shop. “Not the Artemis that is playing with the lights and stuff. But the Artemis who liked to help people with their problems.”
“Yeah, I think if someone is behind it, it’s someone pretending to be Artemis, or trying to shift the blame on her,” said another customer. “She may have done some things, but she’d never deliberately set out to get people hurt.”
Amy smiled at the person that made the comment. “I’ve been here all day. But it’s more than the traffic lights. Didn’t I hear that the other day the Financial District was shut down because the money showed at zero?”
“That is something that Artemis had fun with,” Dark Master commented. “Or had in the past.”
“I’m sure that whatever has been happening in Quail City has nothing to do with Artemis,” Amy replied.
“Hope for Artemis’ sake it’s true,” Calypso said. “Williams is ranting and raving in Commissioner James’ office asking for her to be arrested.”
Just bet he is, thought Amy. “Is there anything else I can get you?” Amy asked them. She saw that it was almost six and the last bus going towards her apartment would be there any minute.
“You in our bed,” Calypso said in her ear. “Your blue hair will look glorious on our pillows.” Then out loud stated, “That’s all for now.” 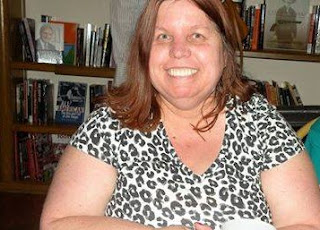 New York Times Bestselling Author Izzy Szyn was born in May of 2014 when a friend dared her to write. Born and raised in Detroit, Mi. Izzy now lives in Oklahoma City with her furchild Misty, the friendliest Chihuahua/Terrier you will ever meet. Currently works in a call center, where she writes in between phone calls. Izzy loves to keep in touch with her readers. Email her at izzyszyn@gmail.com.

a Rafflecopter giveaway
By DawnsReadingNook at April 13, 2017

I really enjoyed this interview. Thank you so much for sharing