Check out the new release from Jack's House Publishing, Silicon Valley Billionaires: Lauren by Leigh James and enter the giveaway for a $100 gift card and a signed copy of the book. 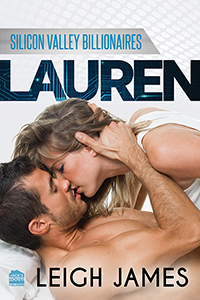 Two Headstrong, Driven CEOs. One Undeniable, Scorching Attraction.
Being a scientist gives Lauren Taylor a purpose in life. At twenty-five, she’s the CEO of a billion-dollar biomedical company, Paragon Laboratories. On the brink of a major discovery, Lauren lets nothing interfere with her work. Until she meets Gabriel Betts, the gorgeous and brilliant CEO of another Silicon Valley startup, and is forced to face her inconvenient and overwhelming attraction to him.
Billionaire Gabriel Betts is a successful scientist in his own right. He’s made his way in the world by being an early adapter and never losing focus. Captivated by Lauren’s brilliance and unselfconscious beauty, he’s determined to win the reclusive female CEO over at any cost.
But what neither Gabe nor Lauren are prepared for is the white-collar danger that’s lurking in Silicon Valley… The danger that threatens not only their companies, but their very existence.
* This is an update to the previously released High Interest and contains significant edits.
GIVEAWAY
Readers have 12 days to enter the contest!

a Rafflecopter giveaway
By DawnsReadingNook at February 16, 2017