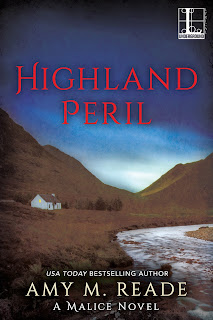 
Trading the urban pace of Edinburgh for a tiny village overlooking a breathtaking blue loch was a great move for budding photographer Sylvie Carmichael and her artist husband, Seamus—until a dangerous crime obscures the view . . .

Sylvie’s bucolic life along the heather-covered moors of the Highlands is a world away from the hectic energy of the city. But then a London buyer is killed after purchasing a long-lost Scottish masterpiece from Seamus’s gallery—and the painting vanishes. As suspicion clouds their new life, and their relationship, Sylvie’s search for answers plunges her into an unsolved mystery dating back to Cromwellian Scotland through World War I and beyond. And as she moves closer to the truth, Sylvie is targeted by a murderer who’s after a treasure within a treasure that could rewrite history . . . and her own future.

USA Today bestselling author Amy M. Reade is also the author of Secrets of Hallstead House and The Ghosts of Peppernell Manor. She grew up in northern New York, just south of the Canadian border, and spent her weekends and summers on the St. Lawrence River. She graduated from Cornell University and then went on to law school at Indiana University in Bloomington. She practiced law in New York City before moving to southern New Jersey, where, in addition to writing, she is a wife, a full-time mom and a volunteer in school, church and community groups. She lives just a stone’s throw from the Atlantic Ocean with her husband and three children as well as a dog and two cats. She loves cooking and all things Hawaii and is currently at work on her next novel.