Discover the world of author Aidee Ladnier and their latest release, The Moonlight Market. Don't forget to enter the giveaway at the end of the post. Aidee Ladnier will be awarding $50 Amazon or Barnes and Noble GC to a randomly drawn winner via rafflecopter during the tour.The tour is sponsored by Goddess Fish Promotions.

Talking with the Author....

Thanks for stopping by to talk a little about your writing! Let's jump right in. When did you begin writing and why?
Thank you so much for inviting me on your blog. I’m so pleased to be here! I started writing around twelve years old. I wrote fiction, poetry, non-fiction, plays, anything I could dream up. I loved being able to escape into other worlds. I had so many ideas and no one had written them yet. So I had to write them myself!

Do certain themes and ideas tend to capture your writer’s imagination and fascinate you?
Yes! I’ve noticed that my books tend to have characters that are required to step out of their comfort zone and take a chance. I felt exactly like that when I submitted my first short story to an anthology. I also usually have strong themes of family versus independence. And in my latest book, THE MOONLIGHT MARKET, I explore the idea of second chances—why they are so important to grab when they are offered and why they aren’t always easy to accept.

Do you have a favorite author who introduced you to the genre?
My earliest books of fantasy were J.R.R. Tolkein and C.S. Lewis. Their worldbuilding inspires me to this day. I also grew up reading children’s books by Alexander Key, especially THE CASE OF THE VANISHING and THE FORGOTTEN DOOR. Those protagonists seemed at first to be ordinary people, but as the books continued, it became more and more clear that there was something a little different about them.

What advantages or challenges does a writer in your genre face in today’s fiction market?
Since my books often contain more than one genre as well as LGBTQA characters, they are a little harder to find a market for. One reader might like fantasy but be put off by the horror elements. Another reader might enjoy the magical realism but hate the contemporary love story. It’s a difficult conundrum for me to overcome because I want to write the best book I can, but I also write the book of my heart. And that book doesn’t always settle into a cookie-cutter genre category.

Tell me a little about the characters in THE MOONLIGHT MARKET.
Cory Long is my first hero in THE MOONLIGHT MARKET. He’s an Asian-American who along with his sister Poe, were orphaned when their parents died in a car collision during his freshman year. Now a college senior, he’s struggling to keep a roof over their heads, graduate, and keep his sister from disappearing forever. Sanderson Beets is a junior at the same university. He comes from a family of performers and left the circuit in order to pursue a degree. He’s pretty unhappy when they call him back for a family performance because it threatens to undermine the independence he’s fought so hard for. And when he returns, his family learns that he was able to leave for college only because he made a dangerous bargain with a witch known as the Weaver of Dreams.

Where’s the story set? How much influence did the setting have on the atmosphere/characters/development of the story?
The setting had a lot of influence over my characters. The Moonlight Market (which the book is named for) is almost another character in the story. It’s a magical place that only appears once a year in a tiny town up the coast. The market is open from sundown to sunrise. It has performers, food sellers, and vendors selling wares from across the globe. You can always find something extraordinary at the Moonlight Market. It’s in this setting that Cory and Sanderson learn more about each other than they ever did on campus. They stay up all night searching for a lead to the whereabouts of Cory’s missing sister, getting punchy with lack of sleep, growing dependent on each other, and weather betrayal. The magic of the market envelopes them and makes them its own.

If you had to write your memoir in five words, what would you write?
Off Adventuring. Be Back Soon.

How often does your muse distract you from day to day minutiae?
Always! However, I have a really good system in place for taking notes wherever I am. I have an Evernote account. I often email myself notes. I’ve even been known to tuck a sticky note in my wallet only to find it the next time I got to pay for a purchase.

What do readers have to look forward to in the future from you?
Readers of my Forbes and Oliver story, THE BREAK-IN will be happy to hear that the first short story in the Busted Labs series, THE APPLICANT, has been expanded into a novella and will be published next year by Dreamspinner Press. In it, roboticist Forbes Pohle is interviewing applicants for a lab assistant position only to find a time traveler on his doorstep. And meanwhile there’s a rather destructive teddy bear robot wrecking his lab. I hope everyone will check it out!

Thanks so much again for hosting me! 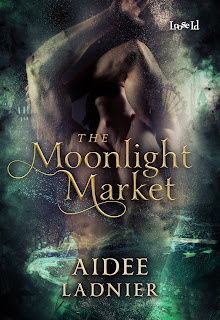 College senior Cory Long tracked his missing sister to the magical Moonlight Market to bring her home. Instead, he found a disorienting world of performers and hawkers, bizarre sights and sounds, and one very familiar showman, Sanderson Beets. Like a drowning man, he latched onto Sanderson, trusting him to navigate the twists and turns of the Market as unerringly as he had steered Cory to passion in their furtive trysts on campus.

But Sanderson was tired of being the quickie in the alley.

Sanderson Beets had escaped the Moonlight Market to attend college, hoping to settle into a normal life, maybe meet someone and fall in love. To obtain that new life he made a dangerous bargain. And when the sinister woman known as the Weaver of Dreams is involved, second chances always come with strings attached…and sacrifices. Sanderson’s debt has come due, and the only payment he has to offer is Cory, and their chance at a relationship.

Excerpt Three:
He almost ignored it.

His skin tightened with goose bumps.

Niari glided into the pool of light cast by the lantern hanging on the back of the tent. Her long, inky dress brushed the bells on her ankles and pulled the shadows forward with her.

“Your debt is coming due.” Her trilling, accented voice floated over the noise from the fairway beyond. In front of the tent children giggled and laughed, the calliope blared out its joyous concert, and the lanterns burned away the darkness. But Sanderson stood in the shadows behind…with her.

Sweat coated his palm, and it slipped from the curtain. He swiped at the bead of perspiration on his upper lip, the pit of his stomach icing into a lump.

“I found someone.” He blurted out the words. “A lost soul. Someone who’s lost something.”

Panic bloomed in Sanderson’s chest. Was he actually going to offer Cory to the Weaver? Cory who just wanted to find his missing sister. Cory of the soft hair, bitable nipples, and beautiful, slim cock. Who made Sanderson feel normal. Like a regular guy.

“Good.” Her smile widened, filled with too many tiny teeth that gleamed bright in the lantern light. “Are they tasty and ripe?”

“Madame?” Sanderson’s gut twisted at the hard glitter in her eyes. A chill crept down his spine. She looked…hungry.

He blinked. Niari stood before him, still and silent, waiting, just a woman again. The malevolent flash must have been a trick of the dim light. He shrugged off the unease and shook the numbness from his fingers. 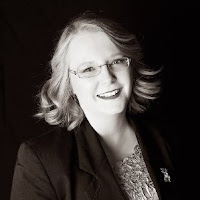 Aidee Ladnier, an award-winning author of speculative fiction, began writing at twelve years old but took a hiatus to be a magician’s assistant, ride in hot air balloons, produce independent movies, collect interesting shoes, and amass a secret file with the . A lover of genre fiction, it has been a lifelong dream of Aidee's to write both romance and erotica with a little science-fiction, fantasy, mystery, or the paranormal thrown in to add a zing.

You can find her on her blog at http://www.aideeladnier.com or on her favorite social media sites:


a Rafflecopter giveaway
By DawnsReadingNook at December 26, 2016

Just nabbed THE BREAK-IN yesterday, and I didn't really realize it was a sequel. Okay to read it before THE APPLICANT, or should I hang on to it?

This book is "my cup of tea", looking forward to reading it!

Really great post, I enjoyed reading it. Thanks for sharing!

I think I have found my next book and author. Looks juicy!

Thanks Lisa! So good to see you today!

Hi Trix! Yes, you can definitely read them out of order. In fact, as THE APPLICANT has been expanded, it might make even more sense to read THE BREAK-IN first. I hope you love it. Jeepers is one of my favorite characters of all time. :)

Yay! As I mentioned in the interview, my books bleed over into several genres so I'm always excited to find people who like multi-genre books like me. ☺

You're very welcome, Victoria! What's your favorite genre to read?

There is certainly some hot stuff inside, Lori ;)

Thank you so much for hosting me today! I hope everyone is having a great holiday. :)

Congrats on the release. It looks like a fun read. Thanks for sharing. Bernie W BWallace1980(at)hotmail(dot)com

I liked the interview.

Shared on G+ to help spread the word, have a great day! :)

@Rita I'm so glad! I'm always a little self-conscious about these things.

@Nikolina, you are amazing! Thank you!

Ive fallen quite behind on the tour =( Thank you for the interview. It's interesting learning where you drew influence.