Discover the world of N.B. Dixon's Heir of Locksley and make sure to enter the giveaway at the end of the potst. The author will be awarding a $10 Amazon or B/N GC to a randomly drawn winner via rafflecopter during the tour. The tour is sponsored by Goddess Fish Promotions. 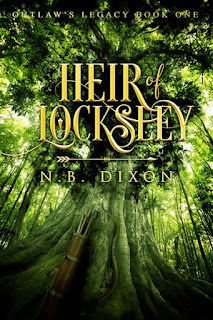 Robin of Locksley is a rebel, more comfortable roaming with his longbow and courting the village girls than learning how to run a manor.

An innocent flirtation with a peasant girl soon lands Robin in trouble, and worse, he finds himself inexplicably attracted to Will Scathelock, his best friend since childhood. Robin must decide whether to follow the rules of society or his own conscience.

Meanwhile, his neighbour, Guy of Gisborne, is anxious to get his hands on the Locksley estate and he will do anything to make it happen—even murder.

“It’s not that bad—” Will began, but Robin held up a silencing finger. Without a word, Will subsided onto a stool. Robin went to fetch a clean rag and dipped it in a bucket of water pulled fresh from the well. Crouching at Will’s side, he reached up and touched the cold compress to Will’s face.

The cut was a nasty one. As gently as he could, Robin stroked the rag down Will’s cheek, wiping away the trickling blood. His skin was warm and slightly rough with stubble. Robin’s heart gave an unsteady lurch. He cleared his throat, which had gone suddenly dry, and searched for something to say. “I met Sir Richard on the way home. It seems my father was worried and asked him to find me.”

Will swore, though that might have been due to Robin’s ministrations.

“It’s all right. He said he would keep silent. I trust him. The next time my father asks where I am, don’t lie on my account.”

“I could tell him you’re off drinking at the Blue Boar,” Will suggested. “He’d like that a good deal better than the truth, I reckon.”

“Let me deal with him. You don’t need any more injuries.”

Will’s face softened. He leaned a little into Robin’s hand. Their eyes met and held. They stayed like that for a few seconds, neither moving, neither looking away. Robin had never noticed before how long Will’s eyelashes were. They were a shade darker than his hair, as were his eyebrows. His lips curved in a slight smile, and Robin’s heart did that odd, painful lurch again.

“You know I’ll help if I can,” Will said. “What’s a couple of rotten vegetables between friends?”

Robin tore his gaze away with an effort. The strength of his reaction surprised and unsettled him. Abruptly, he got to his feet, tossing the bloody rag aside.

“You should let Martha look at that. It may scar, but she is sure to have a salve that will help.”

N.b. is an author of historical fiction. Her love for the Robin Hood legend began in a neglected corner of the school library and has continued ever since. She is a self-confessed bookworm and also a musician.

She began work on the Outlaws Legacy Series in 2013, and was accepted by Beaten Track Publishing in 2016. Outlaws Legacy is a historical series based around the Robin Hood legend. The author describes it as Exciting Historical Adventure with GLBT romance. Book 1, Heir of Locksley, will be released in paperback and ebook on .


a Rafflecopter giveaway
By DawnsReadingNook at December 09, 2016

Hi everyone. I'm delighted for this chance to connect with you all on this, the final day of my blog tour. A big thank you to Dawn's Reading Nook for hosting this post.

thank you for sharing

I have enjoyed the tour.

Thank you for the giveaway!

I love Robin Hood and this re-telling of his story sounds like a great one!

I've enjoyed following the tour for Heir of Locksley and I'm looking forward to reading it. Thanks for sharing all of the excerpts along the way :)

What is the best book that you have read recently? Thanks for the giveaway. I hope that I win. Bernie W BWallace1980(at)hotmail(d0t)com