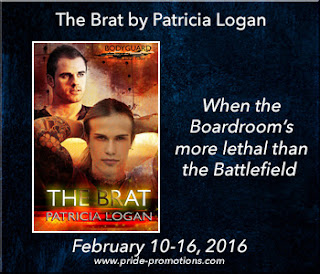 Discover Patricia Logan's The Brat and don't forget to enter the giveaway fora chance to win one of 3 copies of ‘The Brat’ by Patricia Logan. The contest closes on February 23rd. Tour is sponsored by Pride Promotions.

Now let's chat with author Patricia Logan for a minute on her new book, The Brat....

What started your interest in writing?
I lost my job in 2007 and while sending out resumes, I began reading through my library of romance novels and decided I wanted to try my hand at writing a MF novel so I did. That was followed by another and then I wrote a MM and decided to get it published.

If zombies attacked what kind of supplies would you want?
Food, snacks, water, clean clothes, weapons, and books.

If you could sit down with any author dead or alive who would it be?
Kathleen E. Woodiwiss. I’d ask her how she managed to write such amazing historically accurate and sensual romances without modern day Internet for research. Her romances are in a word, amazing.

Do you keep a notebook near your for when new ideas pop into your head?
No, but I do keep a document called catch phrases on my laptop. I update it as I watch TV and find phrases I love or plot bunnies and jot them down. I do have a notebook which I use when I am doing a second draft to make sure I tie up loose ends for the final draft before it goes to the editor.

If you write a series do you reread your previous books before you begin the new one?
No. I generally write them back to back because I try to only write one series at a time so I am familiar with the characters. Sometimes I go back for a reference to hair or eye color of a character, but not often.

Is there anything you wish to say to your readers?
Yes, thank you. I have the most amazing readers in the world. They are my life blood and I adore them. They are an amazing loyal group of men and women and they write to me regularly and interact with me on social media.

For readers who haven't tried your books yet, how do you think your editor or loyal readers would describe your books?
Action-packed, heartwarming, sexy, and fun-filled.

I’m always looking for book recommendations. What books have you been reading? Would you recommend them?
I just finished listening to a bunch of audio books. Some of which, I read before. I just finished the Cut & Run series, the THIRDS series, and I just discovered Rhys Ford’s Murder and Mayhem. Loved them all.

How often does your muse distract you from day to day minutiae?
I often have to stop watching a show to write down a story line or plot bunny. My mind never stops thinking about stories and finding characters I want to write.

What do readers have to look forward to in the future from you?
I am writing another book in the Marine Bodyguards series and am fleshing that synopsis out now. After that, who knows. I still have a YA series on the back burner that I am excited to start. 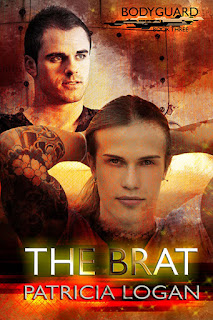 Charles Fordham III has been expelled from Oxford and sent home with his tail between his legs. The self-professed “brat” has always gotten away with things because of his father’s influence and money. Poor Chas is in for the surprise of his life in the form of a tall, well-muscled, former Marine bodyguard… but even more daunting days may lie ahead. Have his years abroad prepared him for the expectations of his father when he’s forced to live up to his legacy?
Tate Heston returns home from Iraq when his beloved career is cut short by an IED. He’s used to turning boys into men and then leading them into battle where sometimes the good guys lose. This makes him even more hesitant about taking on a job guarding a spoiled brat, but he believes he can probably do what he does best...  make young Chas a man.
Not everyone wants to see the brat succeed in his father’s place. Things have been running just fine for years and the return of Charles Fordham III and the shake up his arrival causes, has his family’s enemies in a panic. But as the boy assumes his rightful place, Tate understands sometimes a man must take his fight to the enemy… regardless of battlefield… or boardroom.

Excerpt:
Chas whirled on Tate, stalking up to him, probably having decided that he was the whole problem. Hell, Tate was totally fine with that. Better he hate him than his father. Hate was easy to handle but he was really surprised when he stopped right in front of him and shouted at him.
“You have no right to tell me how I should talk to my father, you… you cretin!” he screamed.
Tate was only slightly surprised as spittle flew out of Chas’s mouth when he spoke and he raised his hand. Is he gonna…?
Tate reached up and stopped Chas’s slap inches from his cheek as he viciously swung his hand toward him. Tate managed to grasp Chas’s wrist, stopping the blow and the action brought the young man flush up against his body. For a few seconds their faces were inches from each other and with all of Chas’s rage, the way his chest heaved with anger, Tate inexplicably felt his cock harden in his jeans. His fury is magnificent. Tate didn’t know whether he should stop the kid or just bend him over his father’s desk and fuck him right then and there and get it over with. He let the thought slide through his mind for a few seconds as he stared into Chas’s magnificent angry amber-colored eyes. It’s probably not the right time… more’s the pity.
Tate hesitated only a second and then tore his gaze away from the man’s, bringing Chas’s arm down and then around the man’s side so that he was forced to turn his back on Tate. Chas cried out as Tate deftly brought his hand up between his shoulder blades, causing him to bend forward to take the pressure off or have his arm snapped in the process. A second later, Chas’s knees gave out and he dropped to his knees on the thick carpet to relieve the pressure on his arm. Tate bent over him, still holding Chas’s fingers up behind his back with one hand. He laid his hand on the back of the young man’s neck, pushing his forehead firmly to the floor with the other hand.
“Ah! You’re hurting me!” Chas gasped out, drooling down toward the carpet beneath him. His body was shuddering but all the fight had gone out of him and he suddenly went boneless as his body relaxed.
Tate leaned down to speak softly at his ear. “No hitting. No slapping. No getting physical of any sort. That clear?” Go ahead. Fight me, you little fucker. I’ll have your jeans around your ankles and my dick up your ass so fast, you won’t know what hit you.
A second later Chas gave an almost imperceptible nod. His chest was heaving and Tate thought he heard a sob come out of the man as he grunted in pain again.
“Okay,” Chas finally ground out through gritted teeth, “Let me up.”

Meet the author:
International bestselling author Patricia Logan, resides in Los Angeles, California. The author of several #1 bestselling erotic romances in English, Italian, French, and Spanish lives in a small house with a large family. When she’s not writing her next thriller romance, she’s watching her grandchildren grow up way too soon, and raising kids who make her proud every day. One of her favorite tasks is coaxing nose kisses from cats who insist on flopping on her keyboard while she types. Married to a wonderful man for 30 years, she counts herself lucky to be surrounded by people who love her and give her stories to tell every day.
Become a fan of Patricia at http://authorpatricialogan.com/ and receive a free book of your choice. Email her at patricialogan.author@yahoo.com. She loves to hear from readers more than anything and will respond to all emails.

a Rafflecopter giveaway
By DawnsReadingNook at February 16, 2016

Thank you for hosting me, Dawn ❤️