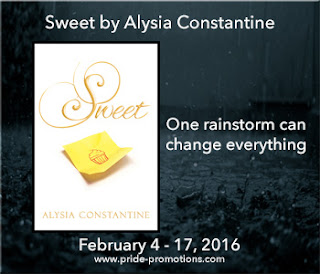 Check out the giveaway at the end of the post and make sure to enter as you could win a $25 Interlude Press gift card to one winner, e-copies of ‘Sweet’ to five additional winners. The contest closes on February 24th. Blog tour is sponsored by Pride Promotions.

Today I’m very lucky to be interviewing (Alysia Constantine) author of (SWEET).  Hi (Alysia), thank you for agreeing to this interview. Tell us a little about yourself, your background, and your current book.

Tell us something no one else knows about your characters.
‘Trice likes kids.  She doesn’t want any herself, but she likes to be an aunt, likes to hang around them.  Also, ‘Trice is a very hopeful, optimistic person.  She comes across as a pessimist, especially since she’s sarcastic, covered in tattoos, and looks a bit scary to some people.  But inside, she’s all lollipops and gumdrops.

Have you ever had writer’s block? How did you overcome it?
Let’s not pathologize it by calling it that.  I think what people call “writer’s block”—that painful stall in writing—is a very natural part of composing.  I think things need time to marinate.  The writing mind is sometimes actively putting things out, and sometimes quietly taking things in.  It looks like hibernation, but I don’t think it is; I think it’s very active.  Also, I think the “block” or the stalling is helpful in building desire—I want to say something, do something, but I can’t.  That only makes me want to do it more, try harder when I can.  What we call “writer’s block” is just the natural going inward, introspection, I think.  At least that’s what I tell myself when it happens to me… every time.

What book you’ve written would you like to see made into a movie?
I don’t think I’d like to see anything I’ve written turned into a movie.  I’ve got a synesthesic response to words—they actually have texture and color and form to me.  The words in the book create, at least for me, a world.  Making them into visual images dilutes or perverts what they are; they wouldn’t be what they are in my head, and they would almost certainly be less vivid and weird.  The images shift and change as they need to.  If it were a film, it would be something like Un Chien Andalou, but in color.  Besides, Sweet is so much about food… how do you successfully make that work on film?  (Gauntlet thrown, kids…)  I guess the fact that I can’t see it means I really shouldn’t be a filmmaker.

Do you work on an outline or plot or just let the story takes you where it wants to go?
I don’t have much success from outlines; usually, I have a very general idea of the direction things will go, or the major plot points I’d like to hit, and I just start to write and see what happens.  I need some tethers, some sense of direction.  As I near the end of a very long narrative project, I start to see more clearly what needs to happen, so I might make some general notes toward the end about where I’m going.  Robert Frost once wrote that writing poetry without formal limitations (metric and rhyme schemes) is like playing tennis without a net.  Maybe it’s like that.  Though I don’t play tennis, and I’ve never met Annette (rimshot!).

Rapid fire questions:
1 – Favorite meal: a super huge salad with all kinds of vegetables and fruit and nuts and stuff in it (olives, but no meat or cheese) and balsamic vinaigrette, with a good chunk of fresh rye bread
2 – Favorite color: green, all kinds
3 – Favorite ice cream flavor: ginger 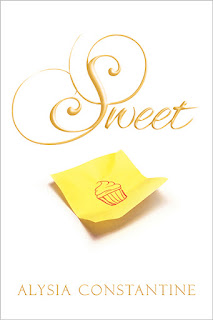 Not every love story is a romance novel.
For Jules Burns, a lonely baker, it is the memory of his deceased husband, Andy. For Teddy Flores, a numbed-to-the-world accountant who accidentally stumbles into his bakery, it is a voyage of discovery into his deep connections to pleasure, to the world, and to his own heart.
Alysia Constantine’s Sweet is also the story of how we tell stories—of what we expect and need from a love story. The narrator is on to you, Reader, and wants to give you a love story that doesn’t always fit the bill. There are ghosts to exorcise, and jobs and money to worry about. Sweet is a love story, but it also reminds us that love is never quite what we expect, nor quite as blissfully easy as we hope.

Excerpt:
"Speakerphone."
"What?"
"Speakerphone. Put me on speaker so you can use your hands. You're going to need both hands, and I won't be held responsible for you mucking up your phone. Speaker."
Teddy set his phone on the counter and switched to the speaker, then stood waiting.
"Hello?" Jules said. "Is this thing on?"
"Sorry," Teddy said. "I'm still here."
"It sounded like you'd suddenly disappeared. I was starting to believe in the rapture," Jules said, and Teddy heard, again, the nervous chuckle.
Their conversation was awkward and full of strange pauses in which there was nothing right to say, and they focused mostly on how awkward and strange it was until Jules told Teddy to dump the almond paste on the counter and start to knead in the sugar.
"I'm doing it, too, along with you," Jules said.
"I'm not sure whether that makes it more or less weird," Teddy admitted, dusting everything in front of him with sugar.
"It's just like giving a back rub," Jules told him. "Roll gently into the dough with the heel of your hand, lean in with your upper body. Think loving things. Add a little sugar each time—watch for when it's ready for more. Not too much at once."
Several moments passed when all that held their connection was a string of huffed and effortful breaths and the soft thump of dough. Teddy felt Jules pressing and leaning forward into his work, felt the small sweat and ache that had begun to announce itself in Jules's shoulders, felt it when he held his breath as he pushed and then exhaled in a rush as he flipped the dough, felt it all as surely as if Jules's body were there next to him, as if he might reach to the side and, without glancing over, brush the sugar from Teddy’s forearm, a gesture which might have been, if real, if the result of many long hours spent in the kitchen together, sweet and familiar and unthinking.
"My grandmother and I used to make this," Jules breathed after a long silence, "when I was little. Mine would always become flowers. She would always make hers into people."
Teddy understood that he needn't reply, that Jules was speaking to him, yes, but speaking more into the empty space in which he stood as a witness, talking a story into the evening around him, and he, Teddy, was lucky to be near, to listen in as the story spun itself out of Jules and into the open, open quiet.
When the dough was finished and Jules had interrupted himself to say, "There, mine's pretty done. I bet yours is done by now, too," Teddy nodded in agreement—and even though he knew Jules couldn't see him, he was sure Jules would sense him nodding through some miniscule change in his breathing or the invisible tension between them slackening just the slightest bit. And he did seem to know, because Jules paused and made a satisfied noise that sounded as if all the spring-coiled readiness had slid from his body. "This taste," Jules sighed, "is like Proust's madeleine."
They spent an hour playing with the dough and molding it into shapes they wouldn't reveal to each other. Teddy felt childish and happy and inept and far too adult all at once as he listened to the rhythmic way Jules breathed and spoke, the way his voice moved in and out of silence, like the advance and retreat of shallow waves that left in their wake little broken treasures on the shore.
Only his fingers moved, fumbling and busy and blind as he listened, his whole self waiting for Jules to tell him the next thing, whatever it might be.

Sweet is her first novel.


a Rafflecopter giveaway
By DawnsReadingNook at February 16, 2016

Hi, everyone. Thanks for hosting me/reading today. I'll stop back later this evening to respond to any questions/comments you leave here. -Alysia Constantine