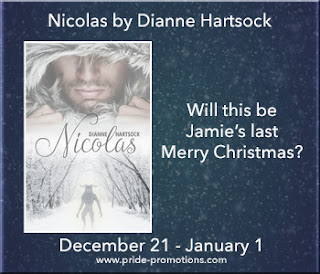 I had the pleasure of chatting with author Dianne Hartsock about her new book, Nicolas. Don't forget to enter the giveaway at the end of the post. You could win a $25 gift card. Contest closes on January 8th. The tour is sponsored by Pride Promotions.

Thank you Dawn for hosting me today! As we head into the New Year, I’d like to take a second to look back at this past Christmas. I’ve always thought of Santa Claus as the spirit of Christmas, spreading the word of peace and goodwill throughout the world. When I started researching St. Nicolas and the Krampus for my story, I quickly learned that St. Nicolas was indeed a kind and caring man. I wanted to bring this good man into the modern world, show his struggle against the evil that is Krampus, who delights in causing chaos and nightmare in an already violent world.

Nico uses his family’s wealth to travel the world, quietly helping the needy, spreading the word of tolerance and love to whoever will listen. But the Krampus follows him, undoing the good he tries to do, his revenge for a crime Nico committed against him many centuries in the past. Only through forgiveness and compassion can Nico win out over his nemesis, proving that love truly is the answer. 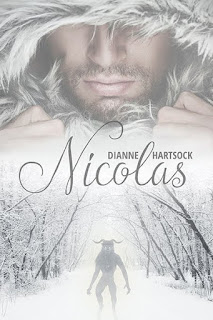 Blurb:
Betrayed by a lover, Jamie rents an isolated cabin on Lake Huron, wanting only to be left alone. Instead, he is pulled from his solitary existence as an artist and tumbles headlong into the legend of Saint Nicolas.

As a young man, Nicolas accidentally killed a man intent on murdering three children, only to have the man's malicious spirit rise up against him. Fleeing through the centuries from the Krampus, the evil troll-like creature that dogs his steps, Nico finds refuge with the young artist who takes him into his home and bed. But Jamie has questions. Who is Nicolas, and why does the Krampus want to destroy him?

When the Krampus begins to torment and torture anyone Nico comes in contact with to punish him, Jamie’s life is put in danger. And Jamie isn’t sure whether he can help Nico defeat his nemesis or if he’s merely a pawn in the Krampus’s game.

23-Dec: Happily Ever Chapter, Elisa - My Reviews and Ramblings, Mikky's World of Books

23-Dec: Happily Ever Chapter, Elisa - My Reviews and Ramblings, Mikky's World of Books

Dianne grew up in one of the older homes in the middle of Los Angeles, a place of hardwood floors and secret closets and back staircases. A house where ghosts lurk in the basement and the faces in the paintings watch you walk up the front stairs. Rooms where you keep the closet doors closed tight at night. It’s where her love of the mysterious and wonderful came from.
Dianne now lives in the beautiful Willamette Valley of Oregon with her incredibly patient husband, who puts up with the endless hours she spends hunched over the keyboard letting her characters play. She says Oregon’s raindrops are the perfect setting in which to write. There’s something about being cooped up in the house with a fire crackling on the hearth and a cup of hot coffee warming her hands, which kindles her imagination.
Currently, Dianne works as a floral designer in a locally-owned gift shop. Which is the perfect job for her. When not writing, she can express herself through the rich colors and textures of flowers and foliage.

a Rafflecopter giveaway
By DawnsReadingNook at January 01, 2016

Happy New Years Dawn! Thanks again for hosting me. :)

Happy New Years! Thank you for the chance at the giveaway! :)

Author Sarah Morgan is back with her latest release focusing on families, adventure and more in The Summer Seekers. THE SUMMER SEEKERS A...