Tour Stop & Giveaway for The Covenant 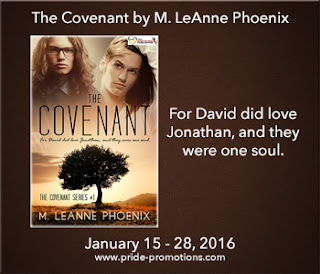 I had the pleasure of talking with author M. Leanne Phoenix below and don't forget to enter the giveaway at the end of the post. You could win a signed copy of The Covenant. Contest closes on February 4th, 2016. The tour is sponsored by Pride Promotions.

Now let's get this party started with a chat with author M. Leanne Phoenix....

Thanks for stopping by to talk a little about your writing! Let's jump right in. When did you begin writing and why?
My momma says that she remembers walking past my door at night when I was five and hear me telling myself stories to get to sleep. The first story I really remember writing was one about a dinosaur when I was in second grade, but I remember making up a story about Princess Ariana Organa, Princess Leia’s older sister, before we knew that she and Luke were twins. Serious writing began when I was 15, which was when I decided I wanted to be like Tolkien. The dark began to call to me when I was 19 and discovered The Crow. At that point, I knew that I was never going to be anything but a writer.

Do you have a favorite genre? Is it the same genre you prefer to write?
I am a romantic, so I love romance, but I also love Tolkien and O’Barr. When it comes to romance, I want to read the genre I prefer to write. Cody Kennedy has my undying love for the Hope series. Kennedian for life!!!

Do certain themes and ideas tend to capture your writer’s imagination and fascinate you?
Yes. Love, survival, acceptance… and immortality.

What advantages or challenges does a writer in your genre face in today’s fiction market?
Advantages… hmmm. I think a gay romance writer has a good handle on the market because I think we haven’t saturated the market, yet. There are still plenty of places to go with our writing. Challenges… we aren’t yet mainstream, so our work is still niche-y. It’s still not on quite equal ground with het romance.

Tell me a little about the characters in The Covenant.
The main characters are David Blackthorn and Jonathan Shea. David tells the story and Jonathan is his best friend and boyfriend. David is sixteen at the outset, and Jonathan is seventeen. They’ve been friends their whole lives, and as of September 1992, their relationship transitions into a love relationship. Their other best friend, Elisha James, grows jealous at the change in their friendship. David is a writer and poet, loves things that sparkle, wears glasses, and has a fantastic relationship with his momma and little brother. Jonathan is a musician and on the baseball team, wants to go to Juilliard, and doesn’t want to be anywhere that David isn’t.

Where’s the story set? How much influence did the setting have on the atmosphere/characters/development of the story?
The Dallas-Fort Worth Metroplex in Texas circa 1992-1993. It had everything to do with the story.

If you had to write your memoir in five words, what would you write?
Annie’s in love with love.

How often does your muse distract you from day to day minutiae?
All the time.

What do readers have to look forward to in the future from you?
Four more books in the Covenant series, and several others in other series. I want to be a stay at home writer one day, because truly, the only job I have ever wanted was Published Author.

When love is forbidden, who can you trust?

Seventeen year old David has been best friends with Jonathan for as long as he can remember, but the day he sees the pastor's daughter press a soft kiss to Jonathan's cheek everything changes. Overcome by jealousy, his explosive reaction reveals a deeper connection that sends their relationship spiraling down into dangerous territory.

When their clandestine love is discovered, they have nowhere to turn for help. The brutal circumstances of their parting test David and Jonathan's  covenant to each other in unimaginable ways. Forced to face their fears, it is in their darkest moments that the two young men discover that the courage, hope, and strength they need to to fight for their love, has been the foundation of their covenant all along.

Excerpt:
David opened his locker to get out his Biology, History, and Music History books and shoved them into his backpack, swallowing hard against the lump in his throat. Jonathan’s comforting hand lit on David’s side as he came to lean on the locker to the right of David’s own, holding up in one paint-besmeared hand, a small piece of black cardboard. On it, David saw symbols, ones he thought might be Greek. Remembering the foreign exchange student from Thessaloniki shared Jonathan’s sixth period art class, he smiled and turned to his boyfriend as he took the proffered gift.
“What does it say?” David couldn’t help but smile at the joy lighting Jonathan’s eyes. “This has to be something that Kallias helped you make—”
“You aren’t wrong,” Jonathan interjected. “That is Greek writing and Kallias even taught me how to say it.”
“Enlighten me, please!” David rasped, focusing wholly on Jonathan’s gift. “Say it and then tell me what it means.”
“If I say it right, it’s agape menomou—”
David furrowed his brow, repeating, “A guppy man oh moo?”
Jonathan slid down the locker in a giggle. “Noooo! I must have said it wrong because your face… oh my gosh, your face!”
Blushing and biting his lower lip, David sank down to his haunches in front of Jonathan. “Then say it again, slower, and tell me what it means!”
Jonathan looked around, and seeing no-one in their locker bank, leaned up to whisper the Greek in his ear, the sounds slower… thicker. “Agape menomou means O love of my heart.”


Meet the author:
M. LeAnne Phoenix would tell you that the worst time of her life was the two years that she attempted to take off from writing. If you asked her to explain exactly why she did such a thing, you would most likely get the mad attempt to arch an eyebrow like her dad and then a shake of the head as she told you it was unlucky to speak of such things. Suffice it to say, it will never happen again!

Born and raised in Fort Worth, Texas in the mid-1970's, Ms. Phoenix was young and wild (and even free!) during the crazy wondrous decade known as the 1980's and the even crazier but now grungy decade of the 1990's. Music is second only to the muses that live and breathe to fill her mind with beautiful men, and music always helps them to tell their stories. She is never without her iPod or her computer no matter where she goes, although, she does like to hike and take pictures of the sky and the moon, and even the occasional shot of the sun through the branches of a tree.

An avid cat lover, Ms. Phoenix has been owned by many throughout her life, though her current owner is one Lily-Rose, who really would like for her to step away from the keyboard and pay her some attention! After all, hasn't she earned it?

a Rafflecopter giveaway
By DawnsReadingNook at January 26, 2016