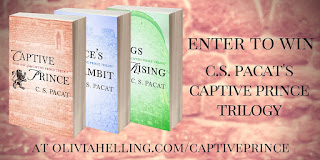 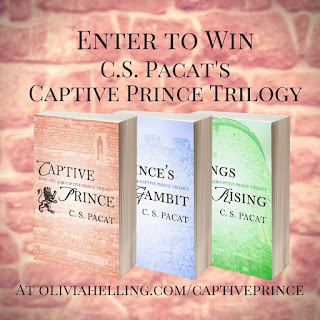 Synopsis for Captive Prince:
Damen is a warrior hero to his people, and the rightful heir to the throne of Akielos. But when his half brother seizes power, Damen is captured, stripped of his identity, and sent to serve the prince of an enemy nation as a pleasure slave.

Beautiful, manipulative, and deadly, his new master, Prince Laurent, epitomizes the worst of the court at Vere. But in the lethal political web of the Veretian court, nothing is as it seems, and when Damen finds himself caught up in a play for the throne, he must work together with Laurent to survive and save his country.

For Damen, there is just one rule: never, ever reveal his true identity. Because the one man Damen needs is the one man who has more reason to hate him than anyone else…

(This giveaway is not associated with C.S. Pacat) 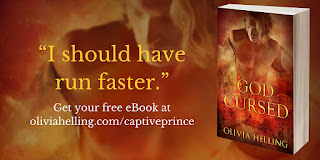 As a bonus, all entrants will also get a free ebook copy of Olivia Helling's gay fantasy God Cursed.

“I should have run faster.”

Warning: God Cursed is not for the faint of heart. This is not a Romance but a love story, the ending will leave you crying, and deals with rape and religious intolerance.

After a life devoted to his god, Seraphin plunged into hell when Alexis turned him into a vampire against his will. Denied a righteous death at his god’s disciples’ hands, his suffering at Alexis’ hands is his only comfort.

But then Adrian’s Blessed Child pops out of the canal and into his lap. Kayto, a naive but lascivious divine catboy, refuses to leave Seraphin alone to save his soul. He mistakenly believes Seraphin can be good, even though all vampires must be evil.

As much as Seraphin finds himself drawn to him, he’ll do anything to protect Kayto from his taint — even kill for him. But how can he protect Kayto, when he couldn’t even protect himself?