Book Spotlight~ The Captain & the Cheerleader by Elaine Cantrell 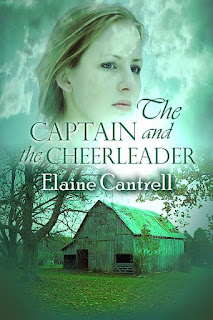 
Blurb:
Susan English can’t stand Robin Lanford! She’s so full of herself she irritates everyone on the faculty of Fairfield High. When Robin bets Susan fifty dollars that she can’t get a date with Kurt Deveraux, the head football coach, Susan jumps at the chance to put the little heifer in her place. She had no idea that teaching Robin a lesson would irrevocably change her life, strain treasured friendships, and throw two families into chaos.

Robin Landford swept into the room and plopped down into an orange plastic chair beside Susan English. “I think Kurt Deveraux is gay.”

It was Friday afternoon, but Robin’s statement halted the teacher exodus from the faculty lounge.

“Why do you say that, Robin?” Susan asked. Yeah, her voice sounded chilly and a bit snooty, but she couldn’t help herself. Robin was fresh out of college and seemed to think she was God’s gift to men; she flirted with anything in pants. This annoying little creature had probably made a play for Kurt’s attention and been rejected. Of course, in Robin’s defense, she’d have to say that not many women could ignore Kurt Deveraux. There might be a man somewhere who had more sex appeal than the blond, blue-eyed coach, but Susan doubted it.

She watched as Robin tossed her hair and pouted. “If I can’t get his attention he isn’t interested in women.”

“Oh, I don’t think that’s the problem at all.” Susan smiled her most serene smile at her irritating colleague. “You just don’t know how to attract a man like Kurt.”

“And you do?” Robin’s eyebrows shot straight up. “If that’s true why haven’t you already gone out with him? Don’t tell me you wouldn’t be interested. He’s hot.”

“Until recently I was involved with someone else. I had no desire to see Kurt or any other man socially.”

Around the faculty lounge a murmur of delighted, horrified voices broke out.

Susan finished her soft drink and tossed the can into a nearby recycling bin. “I could make Kurt ask me out if I wanted to.”

“Yeah? Prove it. Get him to ask you out. I’ll bet you fifty dollars you can’t do it,” Robin taunted. “All he’s interested in is football.”

Melissa Taylor, Susan’s best friend, cleared her throat. “How long would she have to get the date?”

“Two weeks ought to be enough for an old pro like Susan.” Robin snickered as her gaze swept around the lounge. “Would the rest of you like to get a piece of the action?”

All at once a carnival atmosphere permeated the room. They chose Don Brooks who taught art to keep track of the bets, and everyone hurried to put money on his or her favorite.

From the corner of her eye, Susan watched as Robin smirked at everyone in the room. Why did Mr. Dennis hire such an undisciplined, annoying child? It would be a pleasure to give Robin her comeuppance.

Don recorded the last bet on a sheet of copier paper. “It’s about fifty-fifty. Sorry, Robin, but my money’s on Susan. When she enters a room, men sit up and take notice.”

Melissa, who stood near the door, wildly waved her hand to get their attention. “Here comes Kurt now.”