Discover DC Juris's 137 Owens Street and WIN an E-Copy of the book! 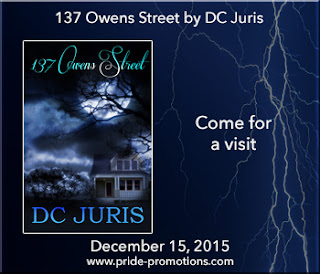 Don't forget to enter the giveaway at the end of the post for a chance to win an e-copy of the book. Contest closes on December 22nd. Book blast is sponsored by Pride Promotions. 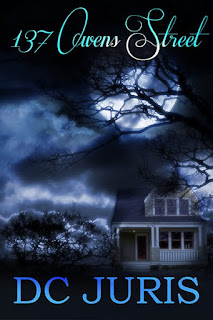 Matthew is going insane. How else can he explain remembering things he doesn’t own or trips his wife never took? Not to mention the visions, and the phantom in the café. But when the man in the visions reaches out to him with an explanation, and the phantom from the café tracks him down, things start to make a little more sense.

Morgan is a devout Christian. He believes in God, Heaven, Hell, and the Bible. But his world spins out of control when his husband Matthew disappears and a mysterious man tells a tale outside the realm of reality. How can Morgan put his faith in something so far-fetched? And what will happen to Matthew if he doesn't?

Excerpt:
A burst of white light surrounded him, and he held his hand up against the glare reflecting from his car. His red car. Not the black one he'd gotten into this morning. He'd known something was off when he'd cranked it up, but hadn't been able to place what. Now he knew—the color wasn't right. He took a step toward the car, and a pair of arms encircled his waist from behind.
"Come back to me!" a soft, deep voice pleaded against his ear.
Matthew turned as quickly as he could, but the light and the man had vanished. He closed his eyes and leaned back against his once-again-black car, his heart hammering, his throat thick with emotions he didn't understand. He'd recognized that voice the moment he'd heard it, yet now he couldn't place it. Now his mind relegated it to the hazy depths of forgotten things, like half-remembered tunes that went like da-da-da-da-da-something...la-la...and nebulous gray snatches of faces from childhood. But in that moment, he'd known, and he'd thrilled in it. The voice had evoked a response from him so intense and swift, like suddenly finding something he'd been missing for years in some random place he'd looked a million times.
He wondered what the speaker had meant. Come back to me. He looked around quickly, cleared his throat, and straightened his clothes. Thankfully, no one else had seen...whatever had just happened. He took a deep breath and headed back into the office. So he was having visions of a different color car and hearing a mysterious voice. That didn't make him crazy. At least, not if he kept it all to himself.
He went back into the building, to his office, and stopped in the doorway. Where was his Chinese dragon? He distinctly remembered buying a print of a colorful Chinese dragon and hanging it right there on the opposite wall. Right where anyone could see it from the hallway. Or...had he? Matthew walked over to the wall. No picture hanger. No hole. Had he dreamed the piece of art too?

Romance author, sci-fi fan club Captain, cosplayer, reigning Queen of Monkeyland, and random menace. Yep, we're talking about DC Juris. She’s a cupcake making, football watching, rubber duck collecting, drag show loving, full of fabulous with a Capital F kinda gal. She's also an Ordained Minister and an amateur photographer. She lives in Upstate NY with her husband, three dogs, and three cats. When she's not writing, you can find her in her favorite chair
watching "Star Trek" and "Supernatural" repeats on Netflix, or surfing the web for porn. Er...research. Surfing the web for research. She may speak softly but she lives and loves loudly. Just ask the neighbors. ::wink::


a Rafflecopter giveaway
By DawnsReadingNook at December 15, 2015