Don't forget to enter the giveaway at the end of the post. You could win a $50 Amazon or BN gift card. The tour is sponsored by Goddess Fish Promotions and you can find all the tour stops HERE 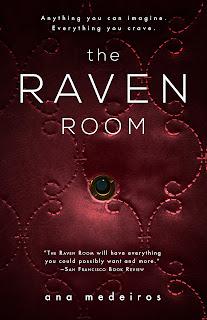 Anything you can imagine. Everything you crave. For the members of The Raven Room, it’s every fantasy fulfilled. But for some, that desire is a matter of life and death.

Drawn by needs he cannot control, Julian ventures to The Raven Room, a secret and exclusive sex club in the underbelly of . It goes beyond sex. It goes beyond kink. The Raven Room is the only place where Julian finds release from the dangerous urges that threaten to destroy the successful life he’s worked so hard to build.

When the police link the Raven Room to the death of a young woman, it threatens to expose a number of powerful people—people who would kill to stay anonymous...

Meredith’s body can’t get enough of Julian. He has opened her sexual horizons to tempting new possibilities. But out of bed she’s an aspiring journalist, and The Raven Room is the story she’s been looking for. By writing an exposé on the club and its elite clientele, she plans to launch her career.

He still thought of them.
Julian woke up that morning covered in a thin layer of sweat,feeling like he couldn’t breathe. He forced himself to inhale and sat on the bed with his head hanging forward between his tense
shoulders. He kept his eyes closed, afraid to open them. Maybe he was still in the house. The fast pounding of his heart against his chest was making his whole body throb. It hurt. He ran his fingers through his hair and rested his damp forehead on his arm.
Julian opened his eyes. Unwrapping the covers from around his lower body, he got up and made his way to the window at the opposite end of the dark room. He drew the heavy, grey curtains and the dull, early winter morning light surrounded him. He squinted and the feeling of the hardwood floor against his bare feet brought him unexpected comfort. He had always liked the cold.
It was another snowy day in . Through the floor–to ceiling bedroom windows on his eighty-fifth floor condo on North , he had full view of the eastern side of the city.
Though it was early, the streets below were already hectic with traffic and pedestrians, all trying to move as fast as they could. To Julian they looked like scattered, lost toys. Sometimes he would concentrate, trying to hear the faint buzz of city noise, but that far up it was impossible. There was only silence. He felt detached from all the life unfolding at his feet, but he never got tired of watching it. The view was magnificent. It didn’t matter how often or for how long he stared at it. The city skyline was a sight that never failed to move him. 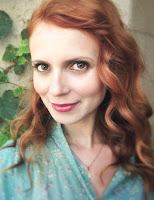 Born in the islands, , Ana Medeiros has a background in Photography, Sociology and Psychology. For the last seven years she has worked in the magazine industry. She currently lives in , with her boyfriend and two cats. The Raven Room, book one of a trilogy, is Ana’s first novel and is published by Diversion Books.

a Rafflecopter giveaway
By DawnsReadingNook at November 19, 2015

What is your favorite Wikipedia article? (Shuddup. Everyone has one.)

Awesome excerpt, I can't wait to read this one. I love a good thriller :).. thanks for sharing!

Enjoyed the excerpt, sounds like a steamy read, thanks for sharing!

Hope you enjoy it, Victoria! :)

Thank you for hosting, Dawn! And thank you everyone for all the support. Hope you enjoy The Raven Room!

I enjoyed the excerpt, thank you!