Book Blast and Giveaway for A Haunting Desire

Don't forget to enter the giveaway for a chance to win a $20 Amazon or BN Gift Card. Book tour is sponsored by Goddess Fish Promotions and you can find all the tour stops HERE

Now let's take a peek into A Haunting Desire.... 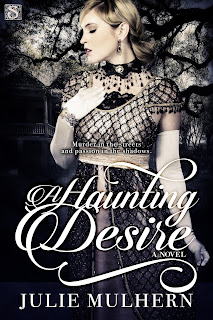 Murder in the streets. And passion in the shadows...

A killer walks the streets of , eviscerating men and leaving them in the streets, and for madam Trula Boudreaux, it's bad for business. Trula needs help but she's not prepared for Zeke Barnes, the charming would-be savior who darkens her doorway-or the yearning he awakens. For while Trula knows well the delights of lust, she avoids love at all costs...

Investigating the killer was one thing, but Zeke can't help but be enchanted by the gorgeous mystery woman who runs an exclusive brothel. Caught between his duty to protect the city and his clear-as-day desire for Trula, Zeke sets about capturing Trula's heart-or at least a place in her bed. But with every moment Trula resists, Zeke falls into greater danger.

For his investigation into the haunted city and madam doesn't just risk his heart but both their lives.

Zeke walked through the door, soaked to the skin, and she handed him a dry towel. “You’ll catch your death.”

His brows rose as his gaze moved from her destroyed hat to her wet dress. With a flick of his sooty lashes his gaze shifted and took in Granny’s one-room cabin. The wobbly table, the bed covered with a colorful quilt, the rocking chair next to the fireplace, and the vivid altar. Then his gaze returned to her. She was all too aware of her sopping dress and lank hair.
His stare trapped her, a lamb cornered by a hungry wolf.

Her heart stuttered then beat far too hard and fast. She wrapped her arms across her chest. A useless protection. “Granny’s not here,” she said. Not that an old woman would offer any additional protection against the man who stared at her with such heat.

His lips quirked as if he could read her mind, as if he knew she was trying to escape her fate. “I hope she won’t blame us for squatting. We can’t drive back to the city in this storm.” A clap of thunder shook the small cabin, emphasizing his point.

She had to spend the night in Granny’s cabin with Zeke?

The quilt-clad bed drew her gaze. She stole a glance at Zeke.

He wore a grin. Damn him.

Julie Mulhern is a native who grew up on a steady diet of Agatha Christie. She spends her spare time whipping up gourmet meals for her family, working out at the gym and finding new ways to keep her house spotlessly clean--and she's got an active imagination. Truth is--she's an expert at calling for take-out, she grumbles about walking the dog and the dust bunnies under the bed have grown into dust lions.

Her first romance was a finalist in the 2014 Golden Heart® contest. That book, A Haunting Desire released .

Julie also writes mysteries. The Deep End (available now) is her first mystery and is the winner of The Sheila Award. Look for book two, Guaranteed to Bleed, in October, 2015.

GIVEAWAY
Julie Mulhern will be awarding a $20 Amazon/BN GC to a randomly drawn winner via rafflecopter during the tour.


a Rafflecopter giveaway
By DawnsReadingNook at October 09, 2015

I have enjoyed this tour and am looking forward to reading the book. Thankk you.

Thanks so much for hosting me today!

I adore this book and cover. Thanks for sharing

Great post - I enjoyed following the blog tour and learning about this book. Thanks for sharing :)

It's been fun following your book tour! Thanks for all the excerpts and information!