Don't forget to enter the giveaway at the end of the post. Christine Amsden is awarding a randomly drawn commenter via Rafflecopter a $10 Amazon/BN gift card. The tour is sponsored by Goddess Fish Promotions and you can find the tour schedule HERE 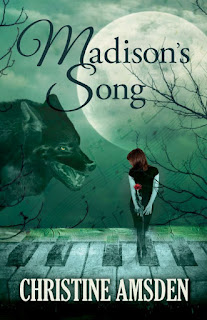 Her voice is enchanting; his soul is black…

Madison Carter has been terrified of Scott Lee since the night he saved her from an evil sorcerer – then melted into a man-eating monster before her eyes. The werewolf is a slave to the moon, but ’s nightmares are not.

Despite her fears, when ’s brother, , is bitten by a werewolf, she knows there is only one man who can help. A man who frightens her all the more because even in her nightmares, he also thrills her.

Together for the first time since that terrible night, Scott and Madison drive to ’s home only to discover that he’s vanished. Frantic now, must overcome her fears and uncover hidden strengths if she hopes to save him. And she’s not the only one fighting inner demons. Scott’s are literal, and they have him convinced that he will never deserve the woman he loves.

Her head rested perfectly atop his shoulder. She wasn't a short woman and he wasn't a tall man. He only had three inches on her, but it put her at the perfect height for his embrace. She fit him. Her beautiful body, soft and full, fit him perfectly too. This wasn't a woman who would break at his touch.

He wanted to kiss her. He wanted more than that, but just now he wanted to feel her lips against his. He had refrained the night before, glorying in her touch alone, forcing himself to let that be all he needed. But today he wasn't sure it would be enough. Today he felt desperate and unsure.

He placed a finger under her chin and lifted it slightly. Her eyes met his in question, but he didn't answer in words. He answered by settling his lips over hers in a soft, gentle brushing of skin against skin. Then he backed away slightly.

Her eyes were closed and her lips slightly parted. She looked a bit dazed and very unsure, but she wasn't pushing him away. He could smell her growing interest and it made his heart swell with newfound hope and need.

He brushed his lips against hers again before deepening the caress. She returned the kiss, a little inexpertly but with all the passion he'd known she possessed. She opened her mouth to him.

Christine Amsden has been writing fantasy and science fiction for as long as she can remember. She loves to write and it is her dream that others will be inspired by this love and by her stories. Speculative fiction is fun, magical, and imaginative but great speculative fiction is about real people defining themselves through extraordinary situations. Christine writes primarily about people and relationships, and it is in this way that she strives to make science fiction and fantasy meaningful for everyone.

At the age of 16, Christine was diagnosed with Stargardt’s Disease, a condition that affects the retina and causes a loss of central vision. She is now legally blind, but has not let this slow her down or get in the way of her dreams.

In addition to writing, Christine teaches workshops on writing at Savvy Authors. She also does some freelance editing work.

Christine currently lives in the area with her husband, Austin, who has been her biggest fan and the key to her success. They have two beautiful children.


a Rafflecopter giveaway
By DawnsReadingNook at July 15, 2015

Thanks for being part of my release day blitz!