Don't forget to enter the giveaway at the end of the post. Melissa Blue will be awarding a $15 Amazon or Barnes and Noble GC to a randomly drawn winner via rafflecopter during the tour. Book Spotlight tour is sponsored by Goddess Fish Promotions and you can find the tour stop schedule HERE

Now onto Kilted for Pleasure..... 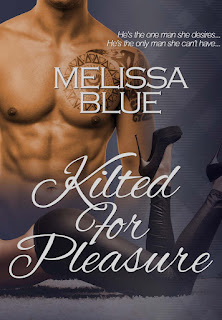 Callan Baird used to laugh more than he frowned, but that was before his wife died. Now his life is duty, debts and a general apathy for anything else. And then Victoria Burke burst into his life. She's everything he wants to corrupt.

Victoria has two choices: agree to a grouchy, sexy Scotsman's extortion or call her boss to explain why she can't do her job. Since she's spent the last three years rebuilding her career as antique appraiser, and this one commission could make or break it, the decision is a no-brainer. Except everything about Callan is complicated.

He sees no problem turning their work relationship into a sexual one. She refuses to break her boss' no-fraternization rule. He's the one thing she wants and the one thing she can't have. He's had his one great love, and doesn't want a replacement. His heart doesn't agree, because she's everything he desires.

Callan will have to let go of his past if he wants Victoria to be in his future.

He made a noise that she could only assume was agreement with her plan. So, yesterday wasn't a fluke—his default was rude. It should have killed her attraction to him, but of course it didn't.

Resigned, she led the way down the corridor and she had to stop again. Swords, axes, dirks and other weapons  decorated the main room. They'd proudly hoisted their family crest above the display.

He shook his head likely taking her moment of reverence as confusion. “You should have done your research. The castle was built—”

“In 1206,” she finished for him and then pointed to a horn that sat below the swords and crest. “Would you mind taking that down? It's not on the list, but that doesn't mean I can't talk my way into getting it included.”

He took it down but didn't hand it to her. “White metal mounts—”

“German silver was used for the mounts. I'm going to assume, until I can do further research, that it's from the 19th century. The thistle etching along the neck is a bit worn, but the domed cap is intact.” She squinted. “It seems to have the original chain. Based on what I know, this style wasn't actually used to hold gunpowder. They were mainly worn as decoration as part of the Highland dress.”

“Show off,” he muttered but she caught a twitch of his lips.

That set the tone for the next two hours as they roamed room to room. She'd find something of interest, either he or she would give the full break down, and then the loser would mutter an insult.

Melissa Blue’s writing career started on a typewriter one month after her son was born. This would have been an idyllic situation for a writer if it had been 1985, not 2004. Eventually she upgraded to a computer. She’s still typing away on the same computer, making imaginary people fall in love.


a Rafflecopter giveaway
By DawnsReadingNook at July 10, 2015

What writing advice do you have for other aspiring authors?

I've been following the tour for this book and it sounds fantastic. I can't wait to read it. Thanks for sharing!

I have enjoyed learning about the book. Thanks for sharing it.

The entire post was exceptional but I especially enjoyed learning more about the author. Thank you for sharing!

I enjoyed the teaser very much! I enjoy following the tours to learn more about each book. Thank you!

I really enjoyed the teaser! Thank you for the post and contest!