Check out Demon of Envy and WIN an Amazon Gift Card

This post is part of a virtual book tour organized by Goddess Fish Promotions. Jennifer will be awarding a $25 Amazon Gift Card, plus a signed print copy of GODS OF LOVE (1-3) and a set of the GODS OF LOVE cover postcards to a randomly drawn winner via the rafflecopter at the end of this post, during the tour (International Giveaway).

Phthonos, god of envy and jealousy, has been given a second chance at life and love in the mortal realm. He is desperate to make up for the mistakes of his past. But is Thon more demon than god? And if the demon Envy wins out, how will this lonely god ever find room in his heart for love?

Olivia is an ordinary woman living an ordered life, but at thirty-two true romance appears to have eluded her. Everywhere she looks people are in relationships or falling in love, but her career as an administrator and her charity work are enough to keep the demon of envy at bay.

Or so she thinks…until the moment he turns up on her doorstep with a demand that rips her life and her heart wide open and leaves her at risk of eternal torment.

DEMON OF ENVY is the fifth novella in the GODS OF LOVE series, but each story is designed as a stand-alone with the Greek gods of desire as a common theme. The series can be read in any order.

The need to engulf her with everything raging inside flooded over him with such force he went super-still. Get it under control. The darkness was too all-consuming, and she couldn't withstand him if he lost it. She was so delicate and easy to break, despite that elusive core of inner strength, and he had to remember at all times to hold himself back.

She was human. She was fragile. And she was about to become his if he could only control his demon long enough to keep her safe.

He shucked off his T-shirt and threw it to one side, before moving forward to take over from her fumbling fingers. "With pleasure." Remember. Do it slowly. He managed to release two more of the tiny buttons before a waft of her perfume teased his nostrils. It was a musky scent that reminded him of hot nights and seductive need, so long-forgotten that its sudden effect on his senses blasted his self-control to pieces. With a groan that rattled his throat on the way out he grabbed the two sides of her blouse and yanked them apart, the remaining three buttons flying off in all directions with a ripping pop, pop, pop.

"Oh!" Her gorgeous mouth formed into a round of surprise. He clutched at her wrists before she could cover her breasts, then released them slowly when he felt her peak of embarrassment begin to subside.

"No! Don't ever cover yourself when you are with me. I must look at you." She was solidly proportioned, with more flesh than was the current fashion, judging by what he'd seen in his brief time back here. But he liked it better when there was something substantial to hold onto.

His fingers trembled as he traced around first one large globe then the other. Her skin was so white he could see the blue network of veins peeking through from beneath. Her life force, so close to the surface. So tantalizing. 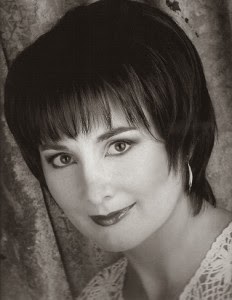 Find her on the web at:


a Rafflecopter giveaway
By DawnsReadingNook at May 29, 2014

Thanks so much for hosting me today :)