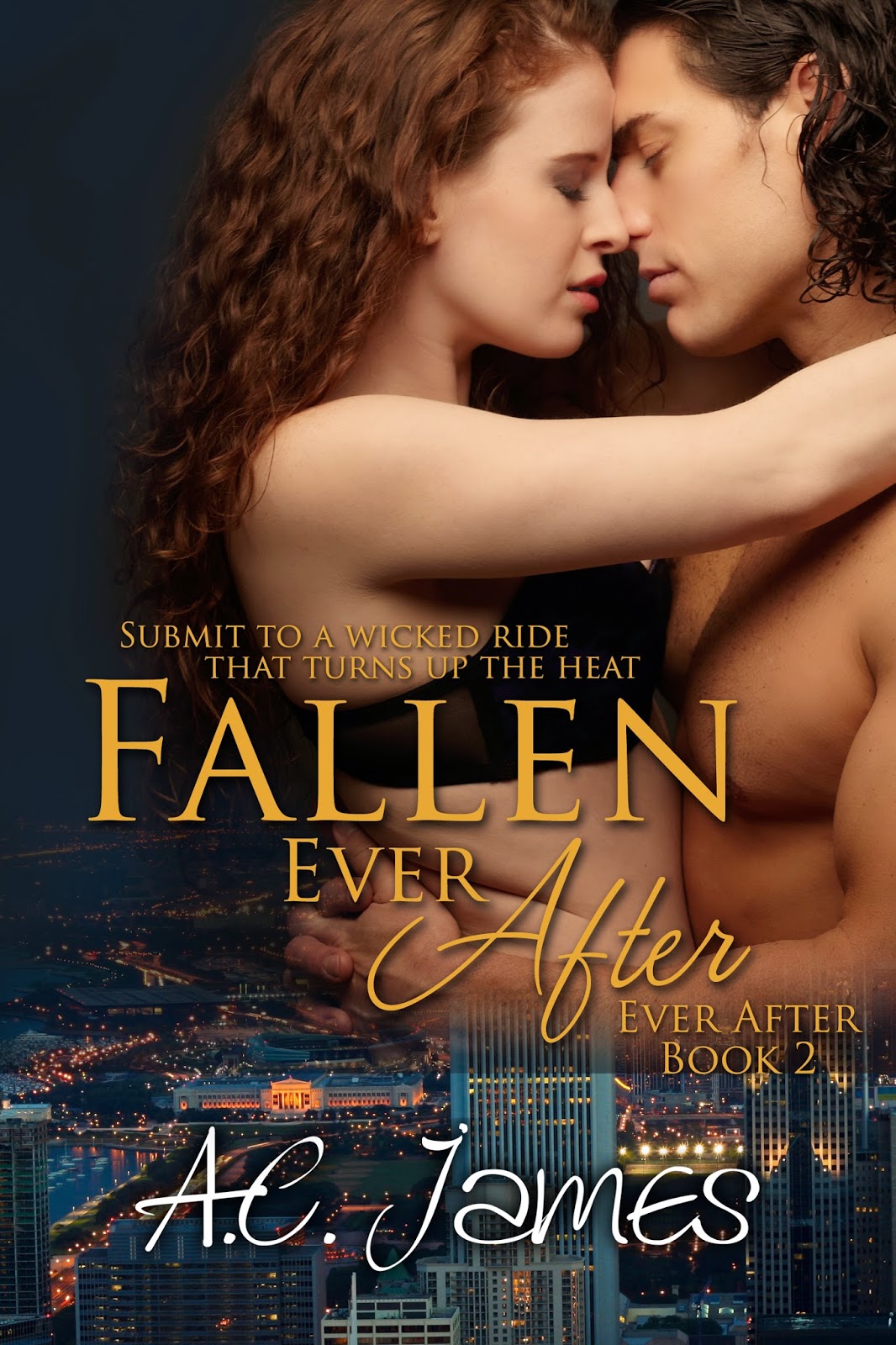 Arie Cush wanted Holly from the very first moment he met her. A night at the Hellfire Club (HFC) is filled with old friends and new danger. The long-standing feud between the faeries that run the Chicago Crew and a lethal toxin puts Holly and other fledgling vampires in danger. Can they stop a vampire-fae war that’s been brewing for nearly a century?

Holly Ellis is still adjusting to their relationship and her new supernatural gifts. She never figured on another battle and she certainly didn’t count on a war. Despite the synthetic threat that could hurt their kind, Holly has been waiting for answers her entire life. She finally gets them when her godmother helps her discover even more about the family she never knew. But is there more to Arie’s past? And who exactly is the mysterious T anyway?

“Brimming with emotion and sensuality, it’ll keep you up far too late reading and craving her next book.”

NOTE: The sneak peek below is a very early look at a scene from Fallen Ever After prior to copy/line edits.

Worry reflected in her eyes. She wore a purple shirt with a silver swirling pattern, her blonde curls darting out in various directions and again her ethereal face was unmarred despite that she’d just turned forty, she reminded me of a well-preserved Madonna. Her silver bracelets jingled as she grabbed her purse from under a counter.
“Of course but are you ready?”
I gulped. “I think so.”
She nodded but I was sure she could tell I was lying. I didn’t know what to think or expect. I only knew that I shouldn’t get my hopes up and I should keep my expectations low. My grandmother might not want to get to know me, might not want anything to do with me after all this time. If she’d wanted to know me, if she’d wanted me at all then she would have taken me in but I figured her grief over losing a daughter made her incapable of loving the child that had stolen hers.
“Let’s go,” I said. “We can take my car.”
Rue turned to the cashier and placed a key on top of the glass case. “If I’m not back, can you close up for me?”
“Sure. No problem.”


She turned and followed me toward the front of the shop. The bell chimed again as we exited and made our way over to my BMW. Rue slid into the passenger seat while I rounded the front of the car and took the wheel. We drove a few blocks and I tapped the side of the steering wheel at a stop light. I sighed. It would be a long three hour drive. Rue told me that my grandmother lived out by Lake Springfield. The light turned green and I accidentally burned rubber when I hit the gas and pulled onto a highway heading out of the city toward Springfield. Rue looked over, her concern for me clear in her expression.


“Whatever happens is meant to be,” Rue said.
I glanced at her. The concern was quickly replaced by a serene look that almost seemed too calm considering the occasion but then again that was Rue. She returned her attention to the highway.
“Try to relax. Watch the road. There’s no sense in worrying about what might happen,” she said, trying to reassure me.
“I know. It’s just…”
“You’re nervous.”
“Yeah.”
“That’s to be expected.”
“I know that but what if she slams the door in my face?”
My voice almost broke.
“She won’t.”
“How do you know? What did she say when you called her?”
Rue paused and looked out the window again before turning back to me.
“Nothing.”
“What do you mean nothing? You told her that her granddaughter who she’s never met wants to meet her and she said nothing.”
I could hear my voice rising as panic surged and I considered pulling the car over.
“I couldn’t reach her.”
“So she’s not expecting us. Wouldn’t it be better to wait until she calls you back rather than us just showing up on her doorstep? You left a message, didn’t you? I don’t want to do this. This is a bad idea. Not if she doesn’t know we’re coming.”
I was shaking my head, my hands clenching the steering wheel.
“It doesn’t matter when we go. She won’t know we’re coming. Her number was disconnected and she’s not listed in the phone book.”
What?
“This is a waste of time.”
I didn’t mean to sound bitter. I needed answers and her number being disconnected made me feel deflated. Numbers don’t get disconnected without a reason. What if she moved? But really I was afraid that it was too late.What if she’s dead? I’d never get the chance to meet her and I’d never know why she never tried to be a part of my life.
“Then how do we even know that she’s still alive?”
“She’s alive.”
Rue said it with such certainty that I felt my throat tighten but I didn’t want to get my hopes up. I couldn’t get my hopes up.
“How can you be so sure?”
“Your grandmother gave me a book a long time ago. It used to be hers. I used it to do a locator spell and the pendulum circled around the location of her house on a map. The same house your mother and I played in as children. She’s still there.”
It’s not that I didn’t believe in magic but you could never count on it to be entirely accurate. No, I’d found that magic could be just an unpredictable as everything else. I wouldn’t let her conviction give me false hope and be crushed when it turned out it wasn’t true. But I didn’t want to sound like a cynical, bitter unbeliever.
I loosened my grip on the steering wheel. “Well, I guess there’s only one way to find out.”
Rue put her hand on my shoulder. “You’ve come this far. I’ll be here every step of the way. It’s going to be okay. I promise.”
She released my shoulder and we drove in relative silence until we reached Lake Springfield. Occasionally, Rue would break the silence to take my mind off it but it didn’t really work. As we circled around the lake and I saw the houses my jaw clenched and my teeth ground together. I had no idea how much the houses cost but I could tell from the looks of it that it was a lot. The further we drove and the closer we got, the angrier I became.
If she lived in a community like this that meant she had to have money. She definitely had the financial means to take care of me. I hadn’t even met her yet but the big houses with their swimming pools and manicured lawns pissed me off. We turned onto North Cotton Hill Road and passed a long driveway that led to a house on the edge of the lake. The area was wooded and we passed the back of a cookie-cutter development.
“Slow down and turn,” Rue said, as she pointed.
I’d almost driven past a dirt road that seemed incongruent with everything else. I slammed on the breaks and almost had to back up but I cut the wheel to the left and headed down the unpaved trail. The space went from being wide open to being edged by trees that became thicker the further we went until we passed under power lines and reached an old two story house.
“We’re here,” Rue said.

Blog Tour Stops can be found at
http://www.acjames.com/events-4/

a Rafflecopter giveaway
By DawnsReadingNook at May 03, 2014

Thanks for having me :)