Jane Margaret Blake’s problem isn’t her drinking. Sure, she’s missing work, and forgetting she’s already fed her cat, who’s getting a little fat. But Jane’s real problem is the reason she drinks: she writes stories that come true and wreak havoc in her life. In her “fables” animals, people, angels, and the Universe itself conspire to destroy Jane’s last chance to be with her old love, or, just maybe, to bring her into the arms of a new love. Years ago, a fable pushed Jane’s best friend Charlie into marrying another woman. Now another fable shoves Charlie’s little boy in front of an angry dog  - or worse, a wicked spirit bent on getting Jane and Charlie to face the truths they’ve spent a lifetime avoiding. As her drinking and writing spiral out of control, Jane must finally discover how to write her own happy ending.
Excerpt:
Later, Jane would remember the way Sam kissed her, warm and friendly and hungry all at once, somehow. She would think about his touch, the strength of his arms and the gentleness of his fingers. She would recall how he carefully undressed her first, then himself, then helped ease her onto the big bed, pulling the wool blanket over them both against the chill growing in the stormy nightfall. Sometimes she’d forget the next bit, because he eased her so well and so completely out of her head and into her body. He didn’t say much, only a word now and then, and her own voice became low and soft in response. She panicked once, she remembered, because something suddenly brought her back into her head.
“Why, Sam?” she asked. “Why do you want to make love to me?”
“I told you, Jane. I want you to feel this, for now, at least.”
“You’re not trying to make me fall in love with you? I mean, I love you Sam, like you said, but my soul mate is – ”
“I know, and I’m not trying to make you do anything you don’t want to do. I want to make sure you know you’re not alone, that you’re connected to someone. And I want to feel connected to you, Jane.” She relaxed again, and felt the bed against her back, supporting her, the pillow under her head, soft and smelling like peppermint, for some reason, and the slightly rough wool of the blanket tucked under her left shoulder. She didn’t have to say or ask anything more, as she gave herself to the sensations. Sam’s cheek against hers, his breath on her neck. His hands as they circled and cupped first one breast, then the other. His tongue that followed. Her hands as they moved down his strong back and up around his shoulders and back down. The warmth of his skin wherever it touched hers. One hand – his – between her legs, opening them up, opening her up. Fingers seeking a place deep inside. One hand - hers - guiding him into her, helping him find the right spot, depth, and rhythm. The sudden gasp of air all the way to the depths of her lungs as he flipped them both over so she was on top of him, melting around him, helping him reach even farther inside her. The warmth, above all, the warmth, as they moved together, slower, faster, slower, then the final shudders, first hers, then his, and more warmth, everywhere, everywhere, everywhere.
About the author
Elizabeth Fountain left a demanding job as a university administrator in Seattle to move to the small town of Ellensburg, Washington, and pursue her dream of writing novels.  She started writing in grade school; fortunately, most of her tortured high school poetry and song lyrics are lost to posterity. Her first book, An Alien’s Guide to World Domination, is a tale of people, aliens, and dogs who face the impossible, and do it anyway.  Now Liz has three more novels in progress, including You, Jane, which will be published by Champagne Book Group in June, 2014. She takes breaks from writing to teach university courses, spend time with family and friends, and take long walks while leaning into the diabolical Kittitas Valley wind. Liz strives to live according to a line from British singer-songwriter Chris Rea: “Every day, good luck comes in the strangest of ways.” Read more of her work at http://lizfountain.wordpress.com 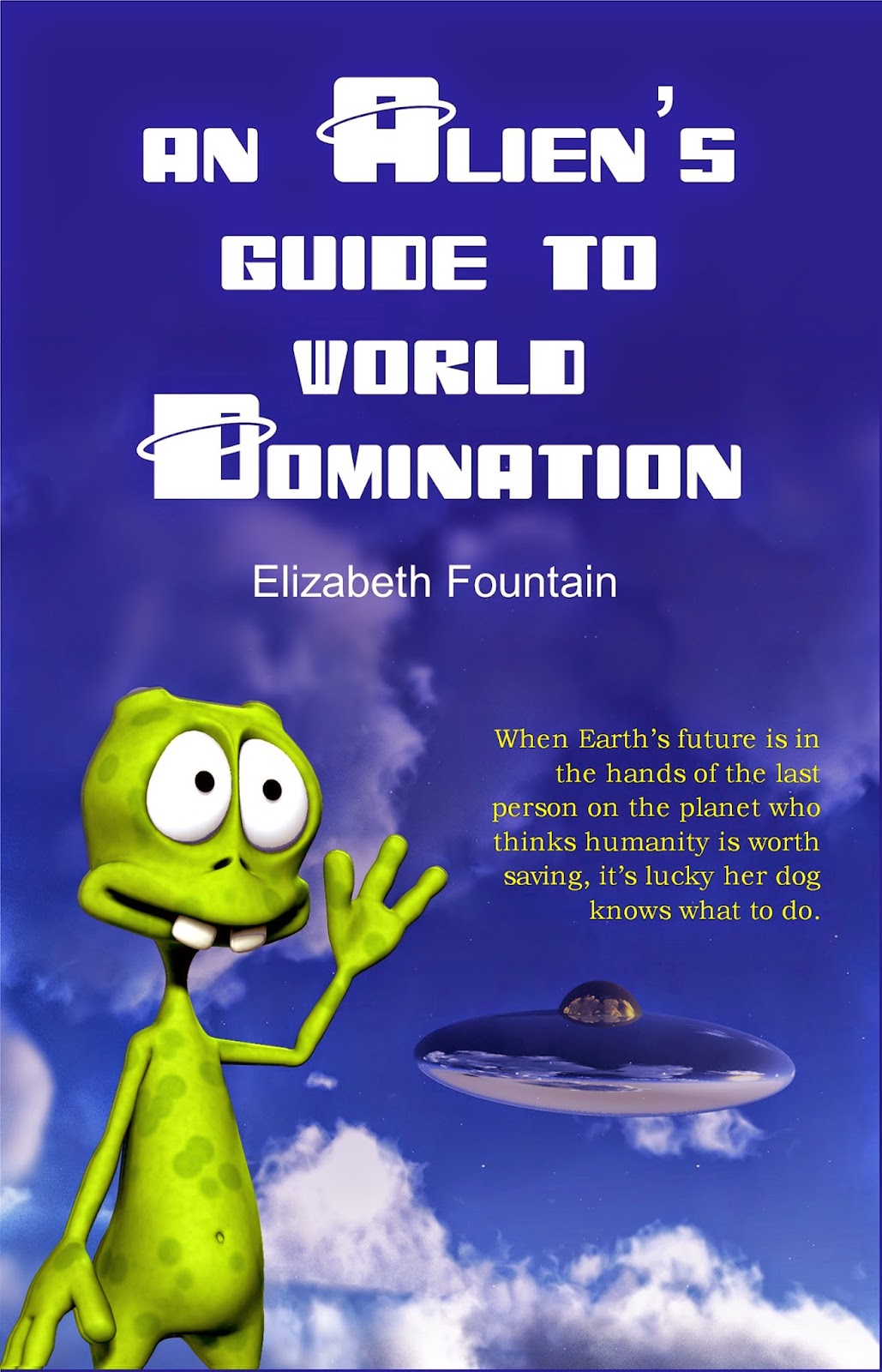 Discover Liz's other book, An Alien's Guide to World Domination

Louise Armstrong Holliday is the last person on Earth you’d expect to save the human race. But when she uncovers proof that her boss is an alien the color of lime jelly gone horribly wrong, and is at the center of a plot to destroy humanity, Louie decides to do exactly that. She begins a journey from her company’s suburban Seattle office park to the old cities and castles of Eastern Europe. Along the way, Louie is attacked by flying books, overly-sensitive bat-crow monsters, and her own self-doubts. She must learn the truth about her closest friend, stand up to her boss, confront her oldest enemy, and make peace with her Aunt Emma, who annoys her in the way only true family can. She also has to rely on Buddy, the little blind mini-Schnauzer who saves her life twice – and really is from Mars.

Thank you for putting this book in the spotlight, Dawn! I'm excited for You, Jane's release in June. I hope your readers will enjoy reading it as much as I enjoyed writing it!