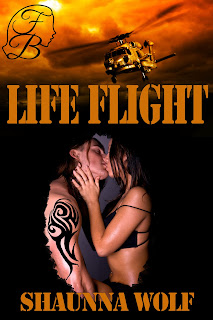 Malachi Blackfeather has spent twenty years in the Army. Two of those years as a Vietnam POW. Now that he's out, all he wants is some peace and quiet to figure out what to do with the rest of his life. Between the flashbacks, and an over interest in sex that is now being called sex addiction, finding his path isn't easy.
Kat is trying to escape an abusive marriage. Her soon to be ex is a master at manipulating the system, and her family thinks she should stay with him, "because no other man will want her". She's looking for escape in any form she can get it.
When they meet, sparks fly. Trapped by a blizzard, can two damaged people, who think there is no chance of love in the world for them, find each other, and survive an unforeseen circumstance that puts both of them in danger?
Mystery, romance, and danger, fill this novel, with a story that will draw you in and not let go.

The inside of the room wasn’t much warmer than outside, an absence of wind the only difference.  Kat sat at the table with a blanket around her shoulders and one around her legs.  She’d found a deck of cards and had a game of solitaire laid out.

“Restaurant’s got generators,” I said.

She moved a card, then another, in the light of the lantern Johnny’d left behind for us.  Acted as if I wasn’t there.

“Hot food, maybe catch some sleep without freezing to death?”

“Not fucking going over there,” she said and moved another card.

“You want to freeze to death?”

“And that’s where we should be, until the power comes back up.”

In a sudden move, she shoved the cards off the table and fled to the corner of the room.  Sank down to the floor.  She pulled the blankets up over her head.  “Not going.  Get away from me, you don’t understand.”

I stared at her, thought she was crying under those blankets.  “Kat, Jake’s not coming back.”

Her laughter came.  “I know that, asshole.  Get away from me.”

Completely baffled, I sat on the floor in front of her.  Sat in silence, while my hands grew colder.  “Explain to me why you want to sit in this frozen room, versus a nice warm dining room with some hot coffee and some food?”

“What?”  We were Indian?  I needed to see her face to know what was going on.

“You going over there to hunt?”

Hunt?  Hunt?  What was she talking about?

“Going to bring her back here?  Hope she has a room, find a storeroom, the bathrooms, share her with me?”

Understanding dawned.  What I called my soul’s demon, she saw as hunting.  I clearly knew I wouldn’t be having her again, not to get to finish what I started, not to find out if this strange woman could make me feel more than once.  Her hunter didn’t want me anymore.  Why that disappointed me, I didn’t know, my demon should have been done with her--only mine wasn’t, it hadn’t gotten its release, her hunter had.

“If I start the car, will you sit out there?”

“I’m going to leave the keys,” I said.  I didn’t tell her how to start the standard, her RT was a standard as well.  “It gets too cold in here, go sit in the car.”

“Not hunting me tonight, saving me, helping me.  I’m not worth it, you know.”

“Everybody has worth, Kat.  Everyone.  Even people like us.”

“Only we aren’t quite human are we?”

I set the keys on the table and left the room

Where to find the author online:

Blog: Critters at the Keyboard http://srhowen1.blogspot.com/ 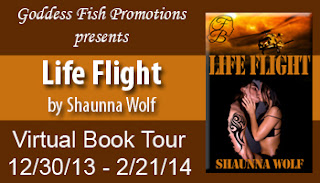 Giveaway Information: Fill out the raffelcopter below to be entered to win the following prizes. Also remember to follow the tour at
http://goddessfishpromotions.blogspot.com/2013/10/virtual-book-tour-life-flight-by.html

a Rafflecopter giveaway
By DawnsReadingNook at January 28, 2014

Thanks for hosting me today! Readers you can read a free chapter on my web site, and discover more books by me. Also, be sure to visit the story board for Life Flight on Pinterest.

Follow the tour for another free chapter coming this week! And of course new pins and more interviews and guest posts.

Don't forget ot ebter the raffle and to leave a comment for an additional chance to win.

Best of luck with the release!

This was a great read. Very realistic characters, a wonderful mystery. Howen grabs hold of you as a reader and doesn't let go!

Thanks Rob, glad you enjoyed the book.