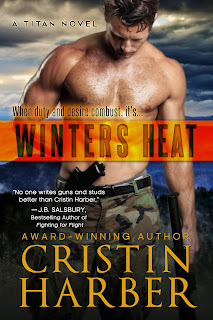 After putting her life on the line to protect classified intelligence, military psychologist Mia Kensington is on a cross-country road trip from hell with an intrusive save-the-day hero. Uninterested in his white knight act, she’d rather take her chances without the ruggedly handsome, cold-blooded operative who boasts an alpha complex and too many guns.

Colby Winters, an elite member of The Titan Group, has a single objective on his black ops mission: recover a document important to national security. It was supposed to be an easy in-and-out operation. But now, by any means necessary becomes a survival mantra when he faces off with a stunning woman he can’t leave behind.

When Titan’s safe houses are compromised, Colby stashes Mia at his home, exposing his secret—he’s the adoptive father of an orphaned baby girl. Too soon, danger arrives and Mia lands in the hands of a sadistic cartel king with a taste for torture. As hours bleed into fear-drenched days, Colby races across the globe and through a firestorm of bullets to save the woman he can’t live without.

Excerpt: Setup- Colby Winters and Mia Kensington are waiting for her attackers to make another move. They’re trying to appear distracted outside a motel room, as if they let their guard down.

What was it like? Oh, man. He had a thing for her in a bad way. Winters bent his head toward her. Their foreheads kissed, and there was no question. While she was with him, she was his. His to protect. His to savor. A woman like Mia was rare. At least he had brains enough to notice.

He never should’ve put her in this position. He could’ve packed her off in a plane, back toward the East Coast. Someone from Titan could’ve kept her safe while he finished his original job. But selfishness and curiosity made it so he wouldn’t push her away. He couldn’t, because an irrepressible desire consumed him, powering lust through his veins.

“Colby.” Her hushed whisper tickled his skin. “What are we going to do?”

His pulse thumped in his neck, and he tightened the forearm wrapped around her waist, melding her onto him.

I’m on the job. Serious danger ahead.

Images flooded his brain, searing his senses. He remembered the taste of her tongue. Red-hot cinnamon. A sweet, delicious burn of aphrodisia.

What were they going to do? Where to begin... A million ideas popped to mind, starting with making good use of the wall behind him.

No woman had pressed against him like this, so pliable, supple, and luscious. They had always draped him like sex kittens on steroids. Those other women were as over-sexed and one-dimensional as they were obvious, all self-fulfilling prophecies, and they were the definitive opposite of Mia Kensington.

Before Mia’s hands explored him, before her beautiful body had even disrobed, she toyed with his mind like it was the first of many playgrounds. And he wanted to play so bad.

“I have you thirty feet from a bed. What kind of list do you—” A drunken couple stumbled out of the bar. Actually, more likely a john and a pro. He should have seen them before he heard them. “More on the list later, doll.”

Men were coming to hurt her, and his hard-on could pick another time for games.

“Okay, Mia, here’s what we’re going to do. When they pull up, act like we let loose. We had too many drinks.” He motioned to the karaoke bar with a tip of his head, then dipped his lips to her neck, lingering under her ear. “I’m convincing you to come to my room. You’re not putting up too much of a fight. Just enough to keep it fun.”

He nipped her earlobe, and she took a tiny gasp. It made his gut jump. Her taste drugged him, intoxicated him. Temptation was a cruel mistress. Giving him a little and making him wait.

“Not my whole plan, no. But that’s the part you have to play.” He traced the slide of her neck. “Think you can act mildly interested?”

“You’re crazy.” Her voice was husky. “Men are trying to kill us. How can you think about sex?”

“You’re what? I’m getting into character. You should give it a try.”

“You’re rubbing your hard-on against me, is what you’re doing.”

“All part of my cover. Believable, huh?” Her innocent act was toast. She was far more like Jessica Rabbit than Snow White. “If I tried to drag you off to bed right this second, you wouldn’t join me?”

There was only one answer. He knew it. Felt it as sure as he felt her body mold against him. She couldn’t fight their hunger either.

Her breaths escalated. The quick rise and fall of her breasts fueled him. Winters cupped her chin in his hands, palms caressing her cheeks. Sweet Mia. If he could freeze this moment, it’d be one he’d put on repeat.

“Forget everything else. It’s just you and me.” He thumbed her lips, dragging the bottom one down.

Slowly, his hands drifted into her hair. Lust hung heavy in the cool night air. Her dark lashes fluttered, and her hard nipples pressed against his chest.

How beautiful would she be naked? How would she feel? Impossibly smooth. He would whisk across her sensitive spots, watching those succulent breasts rise and fall in anticipation. He would make sure she ached for him. As much as he ached now.

His fingers tangled into her hair, and Mia leaned her head back, heavy lidded and heady breaths.

“Shouldn’t you watch for the bad guys instead of torturing me?” Her eyes were sealed shut, defenseless.

His lips grazed her neck, and she purred, the sinful sound acting as a deft stroke to his already engorged shaft.

“You don’t think I can multi-task?” He kissed behind her ear, dancing his mouth down her neck. It was a tease. A simple promise of what was to come. When he had a moment to concentrate on her, he’d do whatever it took—lick, kiss, caress, and suck—to make her cry out for him.

His fingers slid to her nape, trailing to the front of her shirt. The fabric felt fragile under his palms. He was losing a battle to a ripped shirt on a pretty girl, but revenge would be amazing.

“How can you do this,” she nudged her head down to where he nuzzled his erection, “and pay attention to anything else?”

“Can you imagine what it’s going to be like between us when I don’t have to worry about anyone but you?” 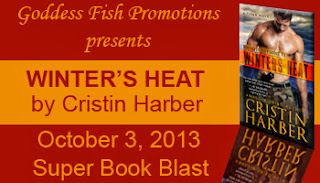 Giveaway Information: Cristin will be awarding a $25 GC to Victoria’s Secret, and gifted e-copies of the five titles in the series (starting w/ Winters Heat. Three novels and two novellas) to one randomly drawn commenter during this tour AND the Virtual Blitz Tour.

Remember to leave comments at all the stops and get extra entries into the contest. 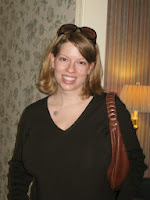 MOM. WIFE. AUTHOR.
Lover of all things sexy and happily ever after.

I live outside with my family: my husband (who doesn’t mind my collection of book boyfriends), an independent toddler, and an English bulldog named Britta who loves to be a conversation piece. Oh, we have a baby on the way—arriving about the same time as WINTERS HEAT debuts!

I love southern food, listen to country music, am always too hot or too cold, and spend hours reading and writing. I cheer on my ! When I’m not pregnant (or nursing), I like a little bourbon or sweet wine. Pregnant or not, I love a lot of chocolate.

I can’t save the world, so instead, I write about those that do. There’s a special place in my heart for those who keep us safe. My Titan series debuts this fall with five titles available in 2013: WINTERS HEAT, GARRISON’S CREED, WESTIN’S CHASE, CHASED, and GAMBLED.

Thanks for sharing my cover and an excerpt!

Sounds like a great read!!
Thanks for the chance to win!
natasha_donohoo_8 at hotmail dot com