Please give a warm welcome to author Chris Quinton who dropped in to chat with me.

- My latest release is Carlyle's Crossing from Total-E-Bound, a paranormal m/m mystery romance set in contemporary .

Do you have any guilty pleasures?

- LOL! Um, yes, a few - mainly wine and dark chocolate [as long as it's 85% plus cocoa content]. Despite being a Type 2 Diabetic, I'm allowed both in small amounts.

- Melusine's Cats. This is a paranormal series set in , centering on the water entity, Melusine, and her agents who take on a feline form. They interfere in the lives of the people who live along her river. The first is titled Greymalkin.

- A bit of both. Usually it starts off as a scene or a snatch of conversation in my head, then I have to work out the who and the why. I rough out a plot arc, but more often than not, it will veer off into uncharted territory.

- No, not usually. I'm very careful with both, but especially names. They and their meanings are important. I like to get the title set as soon as possible - it helps to ground the story in my head, and I don't feel settled into the story until I have a title that feels right to me.

Is there any books coming that you are itching to read (either electronic or print)from your favorite authors?

- The latest in CJ Cherryh's Foreigner series - She is possibly my all-time favorite author in the SF and Fantasy fields. And the next book from Jim Butcher. 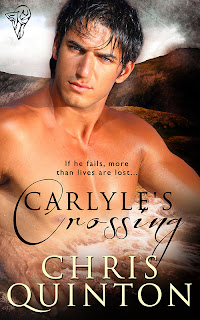 Jubal must face a primordial evil with only an ancient flint knife, two ancestral spirits and Sal at his side. If he fails, more than lives are lost.

Jubal is the last Carlyle, and lives near Seattle, far away from his Abenaki ancestors. A letter from a lawyer draws him and his best friend, Sal, to Vermont and the town of Whitewater. Soon they are right in the middle of the old conflict that drove Jubal's parents away just before his birth.

Whitewater is suffering and not just from the economic downturn. Unleashed by one man's obsession to call back the spirit of his dead wife, and by the well-meaning but flawed actions of another, dark forces are bringing depression and hopelessness.

Jubal's father had neither the talent nor the wish to attempt the task of driving back the incursion, but Jubal knows he has to try. He must find a way to reverse the process before the malaise spreads. But he has no knowledge, no training, just instinct - and Sal. Always Sal, who is rapidly becoming far more than a friend with benefits. The dangers they face are insidious, and more than their lives and sanity are at risk.

“Was wondering when you were going to wake up,” said the voice.

Since his head currently felt as if an axe was embedded in it, coherent thinking wasn’t an option. Jubal managed a slurred, “Shut up,” and tried to open his eyes. It didn’t happen. His lids seemed to be glued shut. Not that it fully registered with him. The mere effort had been enough to send the pain soaring to a new level.

“You don’t want to think about moving just yet.” The deep voice sounded wryly amused. Jubal decided he hated the guy, whoever he was. “You got a minute or so.”

“Wha…?” he groaned. At the same time he became aware of bruising pressure across his chest and legs. A hard and jagged cage-like something enclosed his body. He heard the pings of cooling metal, the steady drip-drip of leaking gasoline. Smelt it as well. Not good. His memory surged back in a nauseating rush.

He’d been returning home after his shift at the forest ranger station, looking forward to getting out of the deluge that hadn’t let up all day, and into a hot shower. Friday night with the rain lashing down, he’d had the back roads leading from Seattle’s Capitol State Forest to himself. Until a deer had come out of nowhere, dashed in front of him in a flash of glistening wet hide and black eyes. He’d slammed on his brakes and—nothing at all after that.

“Help me, for fuck’s sake!” Jubal snarled. He tried to raise his right arm so he could scrub at his eyes, but the pain struck again and he nearly passed out.

“Can’t.” The man didn’t sound regretful, just matter-of-fact. “You gotta do it yourself. And if I was you, I’d start right about now. Bastard’s struck a match.”

“Mother-fuck—” A faint crackling sound started up and another smell assaulted his nostrils. Something was burning.

Panic exploded through Jubal in a scorching tide. He tried to simultaneously shove off whatever was pinning him, roll over and get to his feet. He failed at all three. The agony was oddly distant, but the whoosh of flames and heat was not. His fear became a savage beast that clawed at his brain, at any vestige of self-control that remained. There was only the all-consuming need to be somewhere else—

Something tore deep inside him and Jubal howled. He must have blacked out for a while, because the next thing he knew the biting weight had gone from his body and his arms were free. Rain pattered on his upturned face, sliding its chilled fingers across his skin. He had just enough time to register the texture of the earth and grass beneath him before the gas tank exploded. A wave of heat scooped him up and dropped him into a puddle.

Chris started creating stories not long after she mastered joined-up writing, somewhat to the bemusement of her parents and her English teachers. But she received plenty of encouragement. Her dad gave her an already old Everest typewriter when she was ten, and it was probably the best gift she'd ever received – until the inventions of the home-computer and the worldwide web.

Chris's reading and writing interests range from historical, mystery, and paranormal, to science-fiction and fantasy, writing mostly in the male/male genre. She also writes male/female novels in the name of Chris Power. She refuses to be pigeon-holed and intends to uphold the long and honourable tradition of the Eccentric Brit to the best of her ability. In her spare time [hah!] she embroiders, quilts and knits. Over the years she has been a stable lad [briefly] in a local racing stable and stud, a part-time and unpaid amateur archaeologist, a civilian clerk at her local police station and a 15th century re-enactor.

She lives in a small and ancient city not far from Stonehenge in the south-west of the United Kingdom, and shares her usually chaotic home with an extended family, two hyperactive dogs and sundry goldfish [the psychotic but geriatric mice have gone to The Great Cheese In The Sky].

By DawnsReadingNook at September 18, 2013