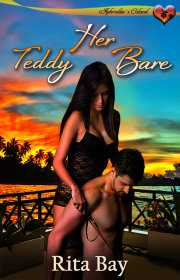 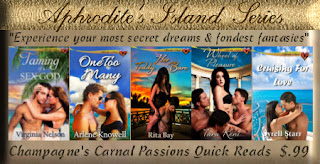 After dumping her cheating fiancé, Diana Harper accepts an invitation “to attend a private event at Miss A’s island retreat to experience your most secret dreams and fondest fantasies.” Miss A gives “Teddy” to Diana as an “attendant.” Despite his best efforts, Teddy isn’t a submissive and the skimpy gold thong is ridiculous on a man his size. Although she’s not a domme, Diana plays his game to see where it leads. When Teddy offers her profound passion, the best sex ever, and the prospect of love, will she take a chance on another broken heart?
Theodore Bareston will do whatever it takes to win Diana’s love, even though “whatever” includes wearing a thong and posing nude in chains when Diana’s interest in her art revives. As the sexual tension builds and passions explode, Teddy is determined to convince Diana that he is the only man for her.

Excerpt: Teddy Cooks an Omelette
“Smells delicious, Teddy.”
“Thank you, Mistress. It’s another favorite.”
He snapped his mouth shut. She could almost hear the mental curses.
“It’s about to become one of mine also, I think.” She reached underneath his arm, grazed his tight abs, and snatched a spiced tomato cube. She popped it in her mouth, closed her eyes, and chewed slowly. “Hmmmm, so good.”
Teddy groaned. She opened her eyes. His cock was peeking over the top his thong again. She stood on tip-toe and leaned close. “Be careful what you chop, Teddy.”
He managed a strangled “Yes, Mistress.”
“It’s too nice to stay indoors. Let’s dine on the terrace.”
Teddy bent over slightly at the waist as he added the cheese to the omelet, then covered the pan.
She walked toward the terrace but stopped to deliver one last dig. “Teddy.”
He tossed the spatula in the sink. “Yes, Mistress.”
“How long before you come …”
“What? I mean, pardon, Mistress?” He braced both hands on the granite countertop but managed to keep his head down.
“…to the terrace, Teddy? How long?”
“Any second, Mistress. I’m about to come any second.”
“See that you do. I’m soooo hungry.”

The” Aphrodite’s Island” series, which remains open for submissions, has its own page at Carnal Passions (http://www.carnalpassions.com/store/category.php?id_category=18) Best of all, the “Aphrodite’s Island” short stories are Quick Reads which are a bargain at $.99 each.
Signature

BIO: Rita Bay is the author of numerous contemporary, historical, and paranormal romance novels and novellas. She has lived and traveled extensively in the United States and Western Europe. Rita has worked as a Registered Nurse, educator, and school system administrator and served as a nurse in the U.S. Army Reserve. She lives with her family on the Gulf Coast. Visit her website at http://ritabay.com where she blogs about history and culture.

Thanks for sharing. I'd seen your book but didn't realize it was a series. It looks like a lot of fun and more!