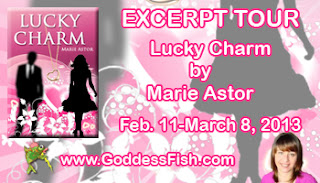 Twenty-eight-year old Annabel Green is about to tie the knot with her college love, an aspiring author Jeremy Blake, but her plans for an ideal wedding are rudely interrupted when she catches Jeremy kissing his gorgeous book agent.

Shell-shocked by Jeremy’s betrayal, Annabel retreats into the quiet routine of TV dinners and solitary evenings. It is then that Annabel’s best friend, fashion designer Lilly Clayton, sets herself on a mission to draw Annabel out of her shell. In an attempt to persuade Annabel to keep an open mind on dating, Lilly takes Annabel for a stunning makeover, but after Annabel passes on a date with a dashing entrepreneur, Lilly decides that more drastic measures are needed. Lilly invites Annabel to see a palm reader who gives Annabel a lucky charm that is supposed to help her find true love.

A few weeks later, Annabel meets a new love interest, and as the two embark on a whirlwind romance, she starts to believe in the power of the talisman the palm reader has given her. But what Annabel doesn’t know is that Lilly is hiding a secret that could unravel her faith in her newly found luck in love.
~~~~~~~~~~~~~
Teaser Excerpt:

“Ann, don’t look now, but there’s a really hot guy checking you out at ten o’clock,” Lilly whispered conspiratorially as they waited for their table at the Cafe Cha Cha.
“Your ten o’clock or mine?” Annabel whispered back. Lilly was forever using expressions like ‘ten o’clock’ or ‘two o’clock’, but she always failed to indicate whose ten o’clock it was, making it impossible to tell the direction she was referring to.
“Mine, of course! Why would it be yours?”
“Because, usually when people say ‘ten o’clock,’ it’s the ten o’clock of the person they are talking to.”
“Whatever. There’s no rule about it, is there?”
“Actually, there is,” Annabel said, more to tease Lilly than to argue.
“Okay, fine.” Lilly shrugged. “Check him out now. He’s not looking.”
Annabel followed the direction of Lilly’s gaze with her eyes, not because she was interested to see who the guy was (she was far from being ready to engage in even a light flirtation) but because she wanted to see if Lilly was just making the whole thing up to cheer her up or if she still had what it took to attract wistful looks from guys. As she pretended to skim the bar crowd, Annabel’s gaze intercepted with that of the handsome stranger her friend was gushing about. Tall and lean, with wavy blond hair that was carelessly slicked back, and blue-gray eyes, he was indeed a stunner, and he was definitely checking her out. As their eyes met, his lips curved in a glimmer of a smile that made the corners of his eyes wrinkle. Well, what do you know? Annabel thought, as she lowered her eyelashes, taking another sip of her drink. I’ve still got it after all. She was about to flash the handsome stranger another look when Lilly drew her attention.
“Annabel, let’s go check on our table. I think it should be about ready now.”
“Hold on,” Annabel whispered, half-turning toward her friend. “You were right about that guy. He is kind of cute.”
“He’s okay. There are plenty of fish in the sea, you know. Let’s go check about that table.” Lilly pulled on her arm.
Just then Annabel looked up and saw a model-thin brunette in a skimpy dress slide onto the barstool next to the handsome stranger. He was not alone: he had been merely passing the time while waiting for his date. Guys like that were never alone. He placed his arm around the brunette’s tiny waist, and as she leaned into him for a kiss, her coal-dark mane spilled all over his chest.
Suddenly, Annabel wished she could fall straight through the floor. It was not because of the guy. Hell, she didn’t even know who he was. Probably he was a jerk, given the fact that he thought it acceptable to ogle other women while waiting for his date. No, it was because she felt incredibly alone. Looking around, she became conscious of all the couples in the bar. Since when had New York bar scene become so full of couples? Annabel remembered it as being full of singles trying to find their match, but now it seemed that she and Lilly were the only single women in the room. Everywhere there were couples, kissing, smiling, and gazing dreamily at each other, while she stood utterly and hopelessly alone. And just like that, her newly found confidence vanished.

Marie will be awarding to five randomly drawn commenters at the end of the tour (US ONLY), one of the following five custom-designed jewelry prizes:

Leave a comment along with your email address to be entered to win these great prizes.

Encourage your readers to follow the tour and comment; the more they comment, the better their chances of winning. The tour dates can be found here: 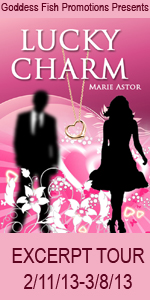 Marie Astor is the author of contemporary romance novels This Tangled Thing Called Love, Lucky Charm, On the Rim of Love, romantic suspense, To Catch a Bad Guy, and a short story collection,  A Dress in a Window. Marie is also the author of young adult fantasy adventure novel, Over the Mountain and Back.

On the Rim of Love – a contemporary romance about the unexpected power of love.
http://www.amazon.com/On-Rim-Love-Contemporary-ebook/dp/B005TOWI7K/ref=pd_sim_kstore_1?ie=UTF8&m=AG56TWVU5XWC2

A Dress in a Window – a collection of short stories about love, coincidences, and fate.
http://www.amazon.com/A-Dress-Window-ebook/dp/B004E112TO/ref=pd_sim_kstore_3?ie=UTF8&m=AG56TWVU5XWC2

Over the Mountain and Back – young adult fantasy adventure novel about a boy who takes his snowboard for a ride and finds himself in a magical, hidden world he never knew existed.
http://www.amazon.com/Over-Mountain-Back-Adventure-ebook/dp/B008WF1Y78/ref=la_B004EBDX9Q_1_6?ie=UTF8&qid=1350684616&sr=1-6

By DawnsReadingNook at February 21, 2013

Lol, Lilly sounds like a fun friend. Loved the excerpt!