My Personal Book Review for Laid Bare by Lauren Dane 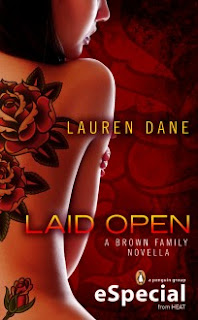 When I heard Lauren Dane was going to revisit three of my favorite characters from her Brown Sibling Series...let's just say I was over the moon. Find out what happens when Erin, Todd and Ben are Laid Open.

Erin, Todd and Ben need time away, to be able to freely love one another without getting up in middle of night to tend to their son or have work call ’s husbands away from home. When Ben and Todd tell they are off to for ten days, she is quite excited. Sun, sand and her men is what gets in this island paradise. But when ’s past causes her to break apart, can Ben and Todd find a way to soothe the woman they love and make everything all right for the woman they both love?

Let me make clear that it is better to read Laid Bare first to see how these three became a triad and what Erin still deals with in Laid Open. If you read this before reading Laid Bare, yo u might be a bit confused. With that said, my three favorite characters are back and it was a joy to see them again after a few years of being together. Ms. Dane lets these characters shine in the tropical paradise of Fiji and with their son and family in Seattle. I loved the different aspects of their relationship-from being parents to lovers to family. I fell in love with them in Laid Bare but Laid Open shows the reader the side of Ben we haven’t seen before. He is very real in one scene that had me in tears at one point. You get the vulnerability he was feeling as he voiced his feelings to Todd. Second, the grief that feels over her daughter’s death was very powerful. This had me bawling as she worked through her grief all over again even as her men tried to be there for her, to show she is loved, to help her as they, too, grieved with her. This was what made the story to me. These two parts alone gave the story heart and a deeper emotion.

Laid Open is about three people reconnecting and strengthening their personal relationship, of making time to pamper one another, to show each other how much they are loved by the others. Laid Open is also about fear as Erin finds herself dealing with a devastating memory that continues to haunt her and her two husbands. With her trademark writing style, Ms. Dane shows the readers how these three love, accept and find time for one another; to fall in love with them all over again and when these two alpha males show such tenderness with one another and with Erin, it was enough to feel my heart go to mush.

The Brown Sibling Series is as follows:

It’s been ten years since clean-cut, sexy-as-hell police officer Todd Keenan had a white-hot fling with Erin Brown, the provocative, wild rocker chick next door. Their power exchange in the bedroom got under his skin. But love wasn’t in the cards just yet…

Now, life has thrown the pair back together. But picking up where they left off is tough, in light of a painful event from Erin’s past. As Todd struggles to earn her trust, their relationship takes an unexpected and exciting turn when Todd’s best friend, Ben, ends up in their bed—and all three are quite satisfied in this relationship without a name. As the passion they share transforms Erin, will it be enough to help her face the evil she thought she had left behind?

Brody Brown has always been responsible for others. After his parents’ death, he gave up a promising artistic career to care for his younger brother and sister. Now, with his siblings grown, Brody owns his own business, has a nice house, makes a nice living, and for the first time in years he’s on his own.

Elise Sorenson has come to Seattle with her young daughter to find peace. After years as a world-famous ballerina—(and just as many years in a marriage-gone-bad)—she’s looking for neither love nor attention. But she finds both in the handsome, honest man who befriends her with no strings attached.

More than friends, Brody and Elise discover in each other what they need—wild, physical passion without commitment. But it’ll take a shadow from Elise’s past to make them look beyond what they need—to what they truly desire.

Ella Tipton is a survivor. In the wake of an attack that left her nearly dead, she’s spent each day putting her life back together. Once vibrant and outgoing, she’s needed to reclaim the best parts of who she was while retaining the hard won lessons. There hasn’t been room for any romantic entanglements, even if she were ready. Still, it didn’t mean she had to stop sneaking looks at Mister Tall, Dark and Tattooed himself.

Security professional Andrew Copeland isn’t quite sure when his jones for the lovely and decidedly skittish Ella developed. He’s known her for years, has watched her triumph over the pain she’d been dealt. Cope is no stranger to women, but he knows the nervous flush he gets every time he talks to her is different than any attraction he’s had in the past. Determined to get Ella to let him in, Andy does the one thing he can think of to get close: he offers her hands-on training in self-defense.

While Ella’s sure he’s just being nice, the prospect of being able to touch him and gain the tools to push away the last vestiges of her fear is more than she can resist. Soon enough, Cope shows Ella his feelings are far more than friendly and re-ignites something deep inside her. Before long desire and love turn them both inside out.

Gillian Forrester spent most of her life running from who and what she came from. Until Miles came along. From the moment she held the tiny newborn her older sister didn’t want, Gillian stopped running and began to build a life for herself and her adopted son. Now, thirteen years later, as Gillian’s sister lay dying, she reveals the father’s identity and makes Gillian promise to find him.

The last thing Gillian expected was to find herself getting hot and heavy with a person like Adrian. But as much as she wants to open up and give herself fully to this amazing man, she’s afraid the secrets of her past and Adrian’s problems with trusting people may keep them apart for good. If love isn’t enough can they find the trust they need?

This is a digital only novella featuring Ben, Todd and Erin from LAID BARE. It takes place during some of the events in TART… It is NOT a standalone.

All she needed to pack was a few bikinis, a toothbrush and some sunscreen. This is what Ben told Erin when he presented her and Todd with tickets to Fiji and the promise of ten days of nothing but sleeping until whenever they wanted, sex without having to lock the door and lots of alone time.

And that’s what they have. Long days and nights filled with pleasure. Long enough that the stress and exhaustion drops away and the three can simply enjoy each other.

They’ve got heat. More than ever before. Recharging their batteries has also brought new levels of intimacy and connection. But when Erin stumbles over the pain of her past, both men band together to not only help her through, but to help each other as well.

And coming in October 2013-Brown Sibling Series Book 6, Drawn Together