Release Blitz for Prophecy of the Undead by Fiona McGier 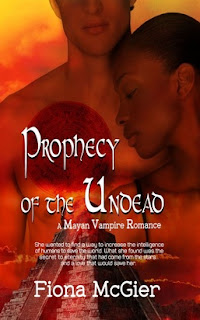 Prophecy of the Undead by Fiona McGier

Keisha is a neurobiology researcher determined to discover the secret to intelligence to save humanity from itself.  What she learns leads her to realize a bigger threat comes from beyond the stars.  Yuri is a Russian vampire whose long-dead feelings respond to the scientist whose brain he admires but whose curves he can't resist.  Will his love reach the places in her heart that she has ignored for so long?  And can they defeat the prophecy of the undead to find happiness sharing eternity?

Buy link: http://eternalpress.biz/book.php?isbn=9781615727988
Note: paperback will become available in a couple of weeks.

Keisha wakes up to find herself tied up in the trunk of a car, and futilely tries to escape while the men had to walk to a gas station when they ran out of gas.  They've returned:

The trunk opened and Keisha closed her eyes, hoping that if she appeared to be still unconscious, they would leave her alone.
She felt the tip of a gun against her cheek as it stroked her face.
“Aw, she’s still out cold. That’s no fun.”
“Just feel her up then let’s get out of here. I’m getting a weird feeling that we’re being watched...”
“By who? There’s no one else out in this God-forsaken...what the fuck?”
Keisha heard a swooshing sound and opened her eyes to see a blur of movement. There was a snarling growl, combined with the yells of real fear, coming from her two tormentors.
“Kill the bitch!.”
She felt the gun stuck into her ribs and held her breath, waiting for death. The gun fired. The bullet tore its way through her skin and chest muscles, burned through her lung, and severed arteries as it lodged in her heart. She found it difficult to let out the breath or to breathe in any more air.
There was the awful sound of breaking bones...then silence.
Someone leaned over into the trunk and lifted her gently out as if she was as light as a child. She felt herself being laid on the ground and fought to breathe as her blood pulsed out of her through the chest wound, soaking her clothes and making them stick to her. Her rescuer tore through the knots that she was unable to budge. She tried to thank him with her last gasps of air.
“Tha...thanks.” She choked on her own blood and her head swam.
“Keisha, look at me,” he commanded in a voice that sounded vaguely familiar, but very distant, as if she was moving far away from him.
She tried to focus her gaze but merely saw the outlines of a man’s torso, with a face barely visible, topped with white hair that shone in the dim moonlight.
“I had hoped to spare you this but I have no other choice now. I can’t lose you...I won’t. You must choose right now, before it’s too late. Do you want to live?”
In her mind she giggled but all that came out of her mouth was a gargling sound.
“Um, yeah...don’t think...option anymore...”
“Yes, it is. But if I do this thing, you will be changed. You will be alive, yet not alive. Are you sure you want me to do this?”
Her head nodded up and down as darkness descended, her vision clouded by the blood that was everywhere now. She drifted off and idly wondered if she was going anywhere or if she was just going to lose consciousness and that would be the end of thought.
Suddenly her mind was invaded by a tall, blond man with an intense look in his eyes that shone with a black fire in their depths.
What are you doing here? I’m busy dying...who are you?
“You are dying but not in the way you expect. What I’m doing is ensuring that you will wake up again tomorrow night. What images would you like me to entertain you with as your body dies?”
She tried to shrug but was unable to move any part of her body.
She felt herself being held by strong arms, with the tiny hairs on her neck standing at full attention while the lips on her neck created a drowsy drugged feeling in her mind.
“How about something erotic?”
Like?
She was suddenly on a downy-soft bed, naked, with a man’s head between her thighs. His tongue was driving her mad with desire as he alternated between licking her from front to back, and nibbling on her clit gently. When his fingers pulled the hood back and his teeth grazed her clit, she screamed with pleasure as the orgasm crashed through her with the force of a tsunami. She rose up off of the bed with the tightening of her muscles. Then the man loomed before her, spread her thighs uncomfortably wide and his hips surged forward. The pleasure she had just felt multiplied as his massive organ pushed its way into her, stretchingher almost beyond comfort. He filled her, then withdrew only to
slam into her again and again. It was almost more than she could bear. She screamed as he came, the force of his orgasm making her spasm with an intensity to match his own.
He growled like a wild animal as he pulsated inside of her.
Her muscles clenched around him. Her orgasms were like a roller coaster of pleasure, pushing her up a hill then crashing her down on the other side.
The last thing she remembered was his voice telling her, "Drink. Drink deeply. Take as much as you can hold. I have emptied you; now, fill yourself with me."
I’m already filled with you. Her thoughts were her own but inexplicably she felt his chest move as he chuckled. Everything went black and she drifted off into nothingness.

*****
Fiona has always had stories in her head, with characters telling her about their lives. Often she wakes up with entire story arcs that she has to feverishly write down before starting her day.  Now that her four children are erudite young adults, she hides from everyone for hours, bringing the stories to life. She hopes that you enjoy your short trip into her mind as you meet some of the heroines and heroes who live there, and now on these pages also. If you want to read more, she has a series of six contemporary romance books about the members of a large Hispanic family, The Reyes Family Romances.  She also wrote two books about female spies who work for a top-secret international agency, as well as two stand-alone contemporary romances.  Visit her at: www.fionamcgier.com, where the first page is her blog.
http://www.manicreaders.com/FionaEMcGier/
http://www.amazon.com/-/e/B003J8QJGE

By DawnsReadingNook at November 21, 2012

Thanks for the (ahem) exposure, Dawn! I've been working mega-hours at my retail job since turkey day! Finally I have a day off, and an incredible amount of things to do, errands to run, etc, just to catch up! But I'm thrilled to have this new release to talk about! And it's on sale at All Romances eBooks at a great price! Also at all of the other usual places as well, in eBook and paperback.