This post is part of a virtual book tour organized by Goddess Fish Promotions. Ana Diamond will be awarding a $25 Amazon or B/N GC to a randomly drawn winner via rafflecopter during the tour. Click on the tour banner to see the other stops on the tour. 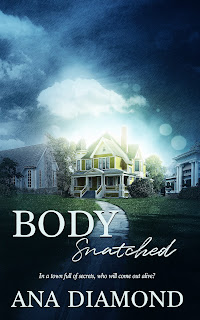 What’s worse than losing a body from a funeral home? Losing two. But mortician and amatuer sleuth, Lily Reynolds has a hunch. The new visitor in town, Rick Drakon, may have charmed his way into her life but she’s not fooled by his smooth talking ways. Problem is, Rick is a long-time friend of Lily’s new husband, Detective James Rivers. While James is busy convincing her to look elsewhere, Lily embarks on a dangerous path toward uncovering the truth. Will this case come between the couple or will Lily find herself closer to evil than ever before?

She sprinted toward the ambulance with James inside. Her heart leaped into her throat. She didn’t want to alarm the others, but she didn’t really know if he was going to make it. Antonio had not. And what would she do if he didn’t? Images of her life with James flashed before her eyes.

From the moment when she’d first laid eyes on his silky black hair and tattooed biceps in the basement of her funeral home to their wedding day when he told her they would be together forever, this could not be the end. She would not want to go on. Tears flooded her eyes, clouding her vision as she ran toward the ambulance James had been loaded into. Yanking the back door open wide, she propelled herself inside.

His eyes were closed but his body had been hooked up to monitors that beeped incessantly. Intravenous fluids ran down the tubing and into James’s arms. And there was blood—lots of blood on the floor of the truck and on the linens of the stretcher. She willed herself into tunnel vision to avoid seeing nothing but red. The paramedics sat on opposite sides of the ambulance monitoring the machines hooked up to him.

She stood at the foot of the stretcher watching for any movement. Was he unconscious? Had he slipped into a coma? Was he only minutes from death? She’d stopped breathing altogether until she touched his leg and his eyes popped open.

“You know, this is the first time I’ve ever been shot.” His eyes sparkled with mischief.

She released the air from her lungs and chuckled at him. Her heart could beat again. “Congratulations. I’ll tell you what you’ve won later. Now work on not dying.”

He smiled and laid his head back on the pillow. “Yes, ma’am.”

About the Author:When Ana Diamond isn't writing about tough gals finding love in unexpected places, she’s at work by day in the medical field. She writes romantic cozy mystery novels with feisty strong women and alluring men who can’t resist them. Her books are fast paced, entertaining and heartfelt all at once.

Ana is a 2020 Tara Contest Finalist for Body Conscious and 2015 Melody of Love contest finalist. She lives in New York with her husband, two children and two needy but wildly entertaining kitty cats.

a Rafflecopter giveaway
By DawnsReadingNook at November 18, 2022

This sounds like an interesting book, thanks for sharing