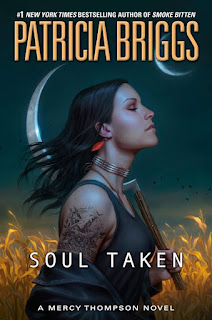 Mercy Thompson has found herself knee deep in danger as her pack and the Tri-Cities are in the bullseye of an enemy that has a score to settle. What Mercy finds out will change not just her but also everyone around her, especially the ones she loves.

My Rating for Soul Taken: 5 Stars and a Series Recommended Read

For Mercy Thompson, having a vampire stalker is bad, the stalker being Wulfe, a vampire who can wield magic in some form and is one of the scariest people she has had to deal with takes it to another level of fear. But when Wulfe goes missing, people in the Tr-Cities are dying and now the threat to a fragile alliance Mercy and her mate, Adam made with the vampires and the neutrality of the place where they live is at stake. An enemy is determined to destroy the pack and Mercy herself. The question is, can Mercy figure out who took Wulfe, why and save their vampire allies before all she holds dear is gone and Mercy is left bleeding on the ground?

Sweet lord above, SOUL TAKEN is one heck of a ride from start to finish. I am going to try to not spill any spoilers in case you haven’t read this one yet but suffice to say, be ready to ignore everything around you as you go on t his merry go round of a story that will leave you breathless. SOUL TAKEN is a story that has been coming since the events of Silence Fallen (Book 10) and the twists and turns in this newest addition in the Mercy Thompson series has me eager to see what is going to happen in the future. In SOUL TAKEN, Mercy is resigned to Wulfe being a nuisance stalker but when he goes missing, an ancient artifact shows up and death follows, well let’s just say that Mercy is about to find herself tested in ways that even she didn’t see coming. What I love about this series is how the author keeps it fresh with each book. We got characters that are as mysterious as the day they showed up in the series and we got long reigning characters popping in with secrets ready to be told, magic abilities that seem to scare the dickens out of people and danger is all around. Mercy is Coyote’s daughter and as always chaos follows but, in this case, it is a on the fence if it’s a good thing or not, especially as Mercy finds herself with abilities not the norm for her pop up. This is a story rich in character development, world building that keeps me glued to the pages and wishing for a map to refer to in the book and a story that continues to weave around this area of the Tri-Cities like a river. For myself, I felt like I was right there alongside Mercy, Adam, and the pack as they took on this foe that threatens not just them but everyone they love and care for. Patricia Briggs delivers in SOUL TAKEN the next part of Mercy’s story and delivers such depth in her storytelling, I never looked at the clock until I could put this down in order to sleep last night.

SOUL TAKEN is more than heroes get to fight danger and live another day. It’s also Wulfe’s story as a we get to know more of how he became the scary vampire who can wield magic at times and is powerful in a broken sort of way. The fact that the author kept the pacing a bit slower than I expected from the beginning until halfway through before revealing specific twists, information and more in the last half of the book is like night and day here. I am not sure if that was by design or not but when that happened, it took me a bit to get back into the story as I was jarred out of it all. SOUL TAKEN delivers all the bells and whistles that is a Mercy Thompson novel but also, we get insight on some of the long-term characters we didn’t have before, as well as questions from a few past books get answered even as new questions pop up by the end of SOUL TAKEN. What I do know after finishing SOUL TAKEN was this: Get ready for Mercy to go boom on her enemies because this time, she is playing for keeps.

If you haven’t gotten into the Mercy Thompson series before, I highly recommend reading it from the beginning (Moon Called, book 1) and I can attest, if you love quirky characters, worldbuilding that is on par with Jim Butcher’s Dresden Files or Yasmine Galenorn’s Wild Hunt series) then this series will keep you entertained, engrossed and ready for more. Now I am eager to see what Ms. Briggs has in store for Mercy, Adam, and the gang in the future books because SOUL TAKEN just about upped the ante in danger and intrigue.

By DawnsReadingNook at September 30, 2022